When the topic of legends of Tiger Stadium comes up, it's generally dominated by dozens of players, and justifiably so. But just one voice has helped to guide the enjoyment of the millions (and millions) of fans in Death Valley: Dan Borné.

He has served as the public address announcer in Tiger Stadium and the Pete Maravich Assembly Center for 25 years, though that is just part of his long association with LSU. A graduate of the Manship School,who received a master's degree in mass communication in 1998, Borné was recently honored with the T.C. Shields Award, sponsored by the Louisiana Farm Bureau Federation, given to an alumnus for their outstanding volunteer service to the school. He is president of the Louisiana Chemical Association and the Louisiana Chemical Industry Alliance. Borné has also served on the Manship Board of Visitors for many years, greatly assisting with consulting, fundraising and providing government relations for too many projects to mention. He has frequently taught classes as an adjunct and is currently serving on two search committees, including the search for a new dean for the Manship School.

One of the nicest men I've ever met in my decade of association with LSU, Dan was nice enough to answer a few questions for us...

BG: How did you become involved with public address announcing at LSU?

DB: I did play-by-play baseball for Nicholls State from 64 to 68 while I was in college there.  We had the only broadcast of college baseball on a commercial station in the US at the time. I came to BR to attend graduate school at LSU and got a job anchoring sports and news for WAFB, Channel 9. 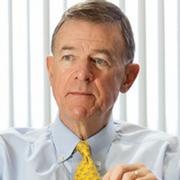 Sid Crocker worked at Channel 9 and also did Tiger Stadium PA. On my first visit to the press box, covering the first game of the '68 season, he invited me to his booth and said, "Take a good look, you might be doing this one day."  We both laughed! I left WAFB two years later and got out of journalism, working instead in university, governmental and industrial settings. When Sid retired after the 1985 season, I called him and asked who was going to take his place. He said he did not know. So I wrote LSU a letter, introduced myself and said I would appreciate being considered to succeed Sid. I heard nothing for several months, but in August, 1986, I got a call from Jamie Kimbrough, the SID, inviting me to meet with him and several colleagues. When I arrived, they were very courteous and said, "Okay, you can have the job."  I answered, "Thanks, but why?"  Jamie said, "Because nobody else asked." And that is how I got the job.

BG: Do you have any preference in announcing football vs. basketball or other sports?

DB: Not really. There is some sense of detachment with football, however, because you are out of sight and unless fans know where the PA booth is there's no way of telling where I sit. Basketball is a lot more intimate because everyone knows exactly where you are, so when you mess up there is no place to hide.

BG: What is a typical game day like for you?

DB: I usually get to the booth three hours before kickoff and watch the stadium fill up as I prepare for the game. I go over the scripts with my producer and we make sure we are on the same page with respect to what announcements are live and which are not. The most crucial time, actually, is pregame, when everything on the field is times and has to come off on the dime. I get a lot of help from the Marketing and Promotions staff that prepares all the scripts, times all the presentations and rounds up all the people we have to introduce. Then I sit back for a moment and watch Patrick Wright so skillfully introduce the Golden Band from Tigerland for its pregame pageantry. And, finally, after the kickoff things sort of settle down and I can enjoy the flow of the game, calling the plays after they run them, of course. I have two spotters who help with the numbers and I'm tied in to the inside PA guy, Jimmy Manasseh, who has the stats crew helping him with down and distance, tackles and the like. Once the game is over I hang around the press box for about an hour, looking over post-game stats and waiting for the traffic to thin out.

BG: Do you get a chance to really enjoy yourself and do things like tailgating?

DB: I rarely tailgate and if I do it's just for a few minutes to visit with special friends. Actually, I prepare for the game mentally and try to eliminate any distractions...like too much food or frolic before get behind the mike.

BG: Aside from the obvious things like expansion, the new press box and the team itself, how has Tiger Stadium changed in your time calling the games?

DB: Our PA booth is a lot larger and it's very comfortable, but its location has changed. Instead of being on the 50, we are now in the south end zone, which makes it tough to get a good angle on what's happening inside the 30 on the north side of the field. The big screen helps a lot and we really don't miss anything. The noise is more deafening than ever. I began coming to games well over 50 years ago, when the stadium held only 68,000. Expansions have made it a much more difficult place for opponents to play.

BG: What has it been like watching LSU develop into an elite program in the last 10-15 years?

DB: It's been wonderful to see our program field consistently outstanding teams. Lots of folks have told me that lightening could strike a third time "this" century with the BCS National Championship Game returning to New Orleans. Would that not be just great?

BG: What is the biggest challenge to calling a sporting event?

DB: Resisting the urge to become the center of attention. A good motto for a PA announcer would be, "The less said, the better."

BG: What are some of your favorite memorable moments from calling the action?

DB: Most recently, the Florida game on the way to the 2007 National Championship. When we announced that Stanford had beaten Southern Cal, the place shook. Vintage Death Valley. And there are so many, many more. But the things I will always cherish are the two National Championship celebrations I had the honor of emceeing in Tiger Stadium. I never dreamed, as a 12-year old kid watching the Tigers win the National Championship in 1958, that I'd have this role to play later in life, and I will always be grateful to LSU for giving me the opportunity to be a small part of its great football tradition.

BG: Are there any players (in any sport) you particularly enjoyed watching?

DB: I both knew and covered Pete Maravich. Here's a story I did on the 40th anniversary of Pete's record, one that will never be broken. It's hard to describe to people the impact he had on LSU and SEC basketball. You just had to have been there.

BG: At the close of the Ole Miss game from this season, when Patrick Peterson intercepted the Ole Miss Hail Mary, that was one of the few times I can ever remember you actually editorializing - "intercepted by...guess who folks..." followed up by a "Thanks for the memories, Patrick." Can you talk about that moment a little?

DB: There had been a lot of chatter on the web speculating about whether Patrick would be introduced with the seniors prior to the game. That, of course, did not happen, nor would it, even though everyone with a pulse knew that he was playing his last game in Death Valley and would be heading to the NFL in the first round of the draft.  Actually, I had not considered saying anything about Patrick until he intercepted the pass at the end of the game, and the words just came out. The game was over, and maybe a little editorializing would be okay, as long as it did not embarrass our visitors. So I said the "guess who" part and the "Thanks for the memories, Patrick" just came out.  I think it captured everyone's feelings about Patrick, but there was no grand plan for those words to be poetic or memorable. But the media picked up on them and they are now orbiting in the galaxy of cyberspace.