Once again, this week's Cookin' ATVS Style takes a classic Cajun recipe and does a slightly different spin on it. A sauce piquant (for the heathens, it's pronounced "pee-kon") is a spicy stew typically made with a tomato and roux base that can include any number of meats: chicken, turtle, alligator, venison, rabbit or other seafood -- I've seen them all. Piquante in the literal sense means "to prick," as in "this is so hot it will prick your tongue," and many of the different types of recipes will call for the addition of fresh diced jalapeno peppers.

This particular type uses chunks of beef and tasso, which is a very flavorful type of Cajun smoked ham that is a staple of any number of dishes. It can be found at just about any special meat store in Louisiana, and just about every grocery store will carry one of the larger mass-produced varieties, like Veron, Manda, Savoie's or Richard's. I can't really comment on availability outside the state. Oberlin also calls for less of a tomato-heavy sauce than the typical sauce piquante, and no roux (I added a little flour to thicken the gravy, but call that optional), but it was nonetheless quite tasty. It is, like most stews, served over steamed rice, and should serve about six people.

Once again, if anybody would like to offer their recipes or suggestions, you can reach us at atvsrecipes@gmail.com. Once again, this recipe can be found in John Folse's Encyclopedia of Cajun & Creole Cuisine. 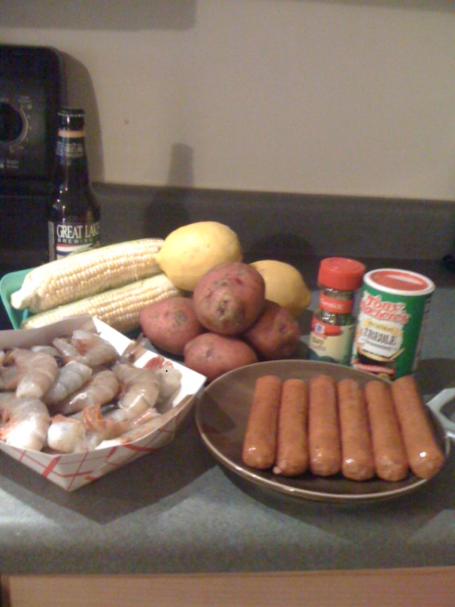 3 lbs beef stew meat, seasoned to taste with salt and cayenne pepper and cut into small chunks -- typically you can buy beef chuck cut into cubes at your grocer, but I happened to have a hunk of beef brisket in my freezer, which I trimmed and diced. On another note, beware of over-salting the beef, as the tasso will be pretty salty on its own.
1 lb smoked tasso, cut into small chunks
2 cups diced onions
1 cup diced bell pepper
1 cup diced celery
¼ cup minced garlic
2 10-oz cans ro*tel tomatos w/green chillies
½ cup water

1. Pour water into a large pot or dutch oven and add the beef & tasso. Cook until brown over medium-high heat. As the fat renders, this will produce the majority of your liquid for the sauce. If you like, you can stir in a half-cup of flour to make a very light roux (make sure you stir it in well and don't leave any chunks floating around). I also added a dash of worcestshire sauce for a little extra flavor. 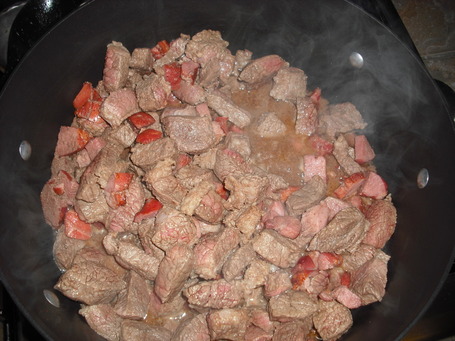 3. Add both cans of rotel, with liquid, and the minced garlic. If you're a fan of them (I am not) you can also add a can of sliced mushrooms with liquid. 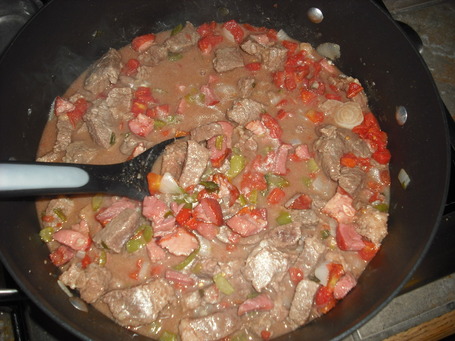 4. Bring the mixture to a rolling boil, reduce heat and then simmer for at least an hour. Once again, the longer, the better. 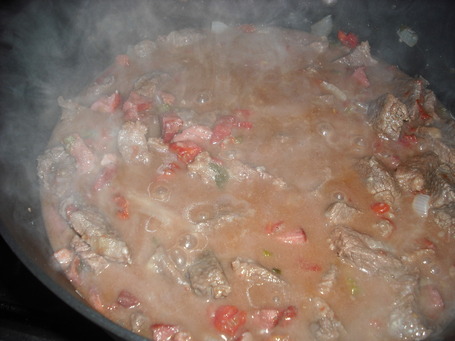 Added by popular request, a picture of the finished product: 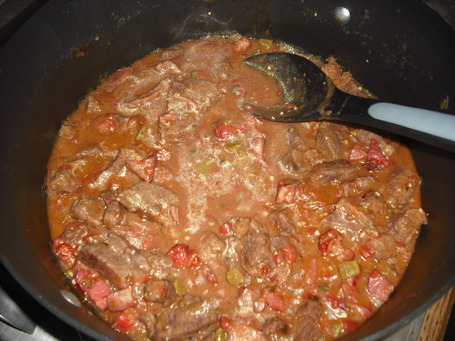