La'el Collins is the perfect recruit. No, really. What is not to love about a prototypical left tackle with glowing reviews regarding his effort (he plays on both sides of the ball!), who grew up in the shadows of Tiger Stadium, pledged to LSU a year in advance and stuck to his commitment, never wavering (no matter what a certain Auburn writer wanted to say)? Really, this appears to be Glen Dorsey all over again. Following recruiting as closely as I do, I don't typically buy into the "We should get guys who bleed purple and gold!" mentality. But Collins brings some of that to his overall package... and frankly, I'm not sure there's a recruit in the entire country I coveted more than him. And when I pencil in my top 100 recruits, I'd be hard pressed to not put La'El Collins number one. Am I being a homer? Well, probably. JaDeveon Clowney was the no. 1 of all no. 1s this year, and some would argue that Cyrus Kouandjio projects even better than Collins... but you know what, I'll take Collins over either of those two... particularly for L.S.U.

Why? Well, namely for the reasons I mentioned above. But also because of the repeated reports about how Collins was clearly the most talented player on the field in most settings, and yet still played his ass off down after down. And if that's not enough, he's an Eagle scout, a good student, a model citizen and stayed loyal to his commitment, which can't be said about Kouandjio. Oh and he didn't need to wait till Valentine's Day to pick the hometown team. It was a simple choice for Collins. Give me character + talent all day, any day. Anyhow, enough gushing in abstract... after the jump let's get into gushing about his physical ability and what his career at LSU will look like. 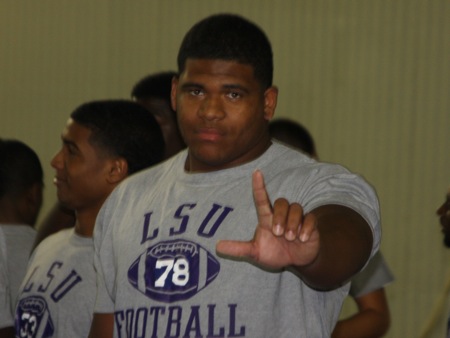 Much like Freak Johnson, La'El Collins is ready to play now.

So what does Collins bring to the table? At 6'5, 285, and growing, Collins has the type of size you look for in a LT. In the size department, he projects pretty well (assuming he continues to grow into a true 6'5-6'6 and adds the good weight). He's already thick and filled out, but not overweight and doesn't carry a lot of bad weight. I believe one national scout described him as looking like "an NFL defensive end." He was fit enough to play both ways for Redemptorist High School last year, without missing much time.

As a lineman, he's very quick out of his stance. He's got good arm length for pass protection. He's a capable puller, which should translate pretty well to the screen game. He's aggressive and tenacious and not afraid to bury his opponent. One thing I've noticed is that he's a fairly crafty blocker. What I mean is that he figures out how to block his opponent... without necessarily just having to rely on his physical tools. Sometimes the physicality of line play is all that's emphasized when the ability to simply wall off your man or keep him out of the play is all that's required. Most of this comes from coaching, but Collins does seem to have a bit of a natural instinct for it. This can probably best be seen in his battles with Clowney in the Under Armour All-American game:

Early on, Clowney took it to Collins using his quickness to blow by him. Yet, Collins adjusted and when he was able to get his hands on him, he handled him pretty well. In other instances you can see him simply emphasize making sure Clowney doesn't get to the play, even if his method of obstructing him isn't conventional. Overall, it's a decent back and forth, with Clowney ultimately having the upper hand, but it says something that the coaches were intentionally matching up Collins on Clowney. They obviously felt he was the only one who could handle him.

Collins aggression can be seen best when he gets to the 2nd level. He often goes head hunting to pick off linebackers and secondary to help aid the progress of his back. He's always looking to further the play, an excellent skill for any lineman. He's got the necessary aggression and size to become a dominant lineman.

Obviously there are still areas for improvement. Like most taller linemen, Collins has a tendency to play too high. While his upper body is thick and muscular, his lower body is leaner and could use some additional weight/strength. Overall his technique will need to continue to be developed (this is true for almost all linemen). Talent wise, he will arguably be the most talented OL on the team this year, already. What does that mean for his playing time? I'm not sure. T-Bob will continue to be the top fill in at the guard positions, so unless Josh D. and Blackwell go down, I don't see Collins factoring in there as much. However, I could certainly see Collins overtaking the more experienced backups at tackle and vying for early playing time. He's that kind of talent.

Outside of his physical skills, Collins possesses outstanding character. He's avoided trouble, become an Eagle scout and participates in various other extra-curricular activities. Furthermore, he's exhibited strong leadership skills, namely in the way he actively recruited for LSU in the year and a half he remained committed but unsigned. Time after time recruits would attest to the relationship they built with Collins and the draw of playing with him. He seems to have something of a magnetic personality.

High End: Collins will play this year. He becomes a 3-4 year starter, All-SEC, All-American performer and eventual top 10 draft pick. His athletic ability, work ethic and character lead me to believe that few things could derail an otherwise promising future.

Low End: I can't imagine a scenario where Collins is anything less than a solid SEC starter.

Realistic: I see him almost entirely living up to his potential. He has very few athletic limitations. His character and work ethic are strong. I see Collins becoming our starting left tackle for at least two years, and potentially even four. He will then move on to being a 1st round NFL draft pick. Yes, I believe in him that much.