If we're speaking honestly, we can all admit that the Anthony Johnson recruiting cycle ended as soon as LSU signed Frank Wilson to a contract. Johnson, a one-time Tennessee commitment, openly admitted as much. Wilson's New Orleans roots and ties to O. Perry Walker High School render him a revered, father-like figure for Johnson. Dubbed "Freak", Johnson looks the part of a 35-year-old man. He's Greg Oden Jr. A man trapped in a kid's body. Except, he's also the biggest kid you've ever seen. Frankly, Freak looks like a 5th year senior... as an 18-year-old early enrollee. And that's tremendous news for LSU, who needs the young DT to step into an impact role as early as possible.

Freak is a ballyhooed recruit, 5-star across the board, reaching as high as 2nd overall in ESPN's rankings. So what makes Freak special? More importantly, why is he the most important recruit from the 2011 class? I'll seek to answer that after the jump. 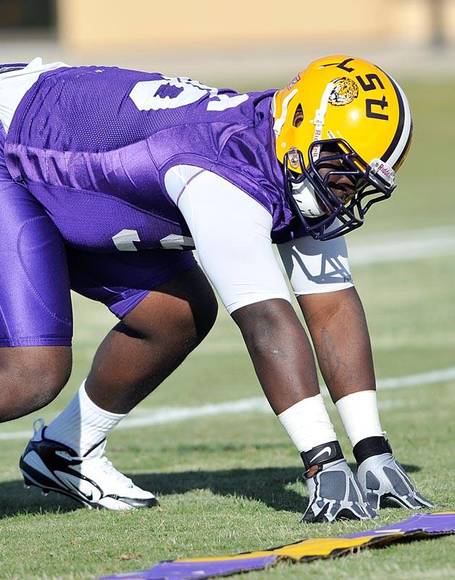 Freak Johnson is a bear in shoulder pads.

First, let's cover the basics. Johnson is a 6'4, 298-pound defensive tackle with bull-like strength and cat-like quickness (double cliche!). Football is increasingly becoming more and more of a "role" game. At some positions, the days of entrenched starters has almost fallen by the wayside (most notably, running back, but also the defensive line, linebackers and secondary). Players will specific skills (say, rushing the passer) are plugged in based on down and distance and play little otherwise. Even still, there are players with transcendent skill sets ("every down players"). Anthony Johnson is one of those players.

Johnson is that rare blend of DT that is bulky and strong enough to be a superb run stopper, but also light enough on his feet and fast enough out of his stance, with a bevy of pass-rushing moves, to be a disruptor on the inside. In the past, players like Chad Lavalais and Kyle Williams have thrived with a lunch-pail mentality and aggressive playing style, using penetration to wreak havoc. Imagine a player who plays with effort/intensity like that and talent like, say, Ndamukong Suh. Yes, that's a lofty comparison. Yes, I do believe that potential is possible for Mr. Johnson. Rivals.com's one complaint regarding his game is a tendency to play "over aggressive." I'll take that, any day.

Johnson has long, powerful arms, and very active hands, which he uses to shuck off and toss around defenders. But he's not all power. Johnson can close in the backfield, which makes him a threat to be a pretty dominant pass rusher on the interior (8+ sack potential). What's remarkable is that this is an 18-year-old with a body that doesn't need much work. He has plenty of room to add additional bulk and strength, but he doesn't come into LSU "blubbery" or "needing to refine" like, say, Chris Davenport did. Johnson's body is large, but fit. He's got massive shoulders and just an overall huge frame. He already checks in at around 300 pounds, and I imagine he'll wind up around 315-325 by the time his playing days are over. But whereas other players would check in heavy at that weight, Johnson will carry it naturally and comfortably. He's got tree trunk legs and a thick lower-body, as well. He's just a bear.

Honestly, I'd like to sit here and say there are "areas for improvement," but I think they are pretty few. This kid is rare. Obviously he has some work to do, but having spent the Spring on campus and now a full summer of workouts, he's already listed at the top of the depth chart. I compare him favorably to a young impact DT such as Tommie Harris, who also started as a true freshman for OU. Further, Johnson is a good kid with a good reputation, so I don't expect he'll face any disciplinary/motivation issues such as talented DTs like Ricky-Jean Francois and Claude Wroten have in the past.

High End: Like Collins, he's got NFL top 10 draft talent. He will start this year and likely be a Freshman All-American. Will be considered a premier DT by the time his career his over and contend for All-American and numerous awards.