Some guys are physical freaks. They run blistering 40s at unreal sizes and can seemingly win a jump ball shortly after popping out of the womb. Rueben Randle fits into this bracket. But so did Xavier Carter. And then some guys just have a knack for the game. To paraphrase my colleague Poseur, you can have the athlete, give me the football player. Honestly, you can have success with either. I'm not sure anyone would ever say "Randy Moss is just a football player." But there's only a select few people in this world who wouldn't take Randy Moss in his prime on their football team. And those people probably only argue against him for character reasons. 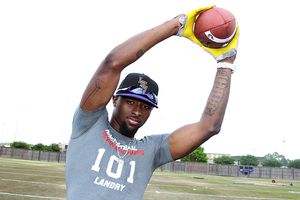 Jarvis Landry is a football player. The fact is, he doesn't measure in at 6'4", doesn't weight 220 pounds and doesn't run a sub 4.4 40. If we're being honest, he's undersized and a step slow. If I'm also being honest, I couldn't give less of a damn. I'll take Landry over any WR from this past recruiting class, and maybe even ahead of anyone the year before. Why? Because I believe Landry is special. Some players have a unique quality about them that sets them apart. To me, Landry has that "it" factor. I'll explain better after the jump...

Most people cite Landry's size as a weakness. He's listed at 5'11", 190 lbs. Both, I would guess, are generous. Guys that size typically need rare speed to distinguish themselves as "elite" prospects (Jackson, DeSean). Landry, did not. Sure, it took him most of his senior season to earn the coveted "5th star." In fact, I'd argue he came out of the recruiting process still underrated. If you look at his "Scouting Report" on Rivals, his only highly valued trait is his agility, which is ranked as "As Good As It Gets." The rest merely check in at "Division 1 Player," the type of ranking you'll see often given out to 3 and low 4-star prospects. In other words, "nothing special."

But for me, Landry's size is a strength. Not in the sense that it gives him a physical advantage, but a mental one. If you've seen a Landry interview (or had the chance to speak to him as I did), or hell, even watch 35 seconds of his highlight tape, you can tell there's a chip on his shoulder. He plays with reckless abandon. He may be the smallest guy on the field, but he's also the toughest. Perhaps I'm extrapolating too much meaning from this, but what I see is a guy who has been told all his life that he's "too small" or "too slow" or "too whatever" and he's bottled that all up and said, "Screw that, I'm going to become the absolute best I can be."

If there's one thing that irks me in player evaluations, it's the notion that a "smallish" or "slowish" WR cannot "create separation." Frankly, I don't think that's rooted in truth. My evidence: Jerry Rice. Marvin Harrison. Okay, sure those are two rare, elite talents. Perhaps they are the exception, not the rule, but concept is there. Neither guy was big. Neither guy was overly fast. But both excelled at understanding how to run a route. Both understood how to use their body to manipulate a defender and get themselves open. Both knew how to use their hands to enhance their positioning. And it had little to nothing to do with speed or strength. It was about precision and smarts. Sure, they both used quickness to get themselves into and out of breaks, but that's a trait Landry himself shares.

At the Under Armour All-American Game Deion Sanders said Landry is the most natural receiver he's seen since Jerry Rice (or something like that). I take his comment with a grain of salt, because, well, Sanders is nothing if not hyperbolic. But again, the seeds of that playing style are there. Landry isn't going to be DeSean Jackson and simply run by you at a dizzying pace. But I'll be damned if he isn't going to find a way to get open.

So what does he do so well? First of all, Landry is very, very aggressive. He's an "attacker" in every sense of the word. He attacks the football, going up and catching it with his hands, rather than letting it get into his body. This guy is an elite "catcher," something I'm not sure I'd say about any other WR on our roster, including Rueben Randle.

As a blocker, he's a maniac. When I had the chance to interview Landry over a year ago, we asked him what his favorite player ever was. His answer? Blocking for his running back on the way to a huge touchdown. That's a pretty rare quality to see in a wide receiver, much less a 17/18-year-old kid. Many HS wide receivers struggle to adapt to the blocking aspect that comes in the collegiate game. Landry is one who will fit in seamlessly.

His route running is pretty unparalleled for a player his age. His quickness in and out of breaks is rare. That's a great attribute for a route runner. Route running isn't about a guy who can run track sprints. It's often about the first three steps... the ability to plant and reach top-end speed in a step. Landry has that. Landry states he works very diligently with his older brother (who also played college football) to refine and perfect his route-running skill. It shows.

Finally, his toughness. This can be seen in his blocking, but also when he's got the ball in his hands. He rarely goes down on first contact. For a small guy, he's got good balance and he can take a hit. He's not afraid to go across the middle and mix it up. He's fearless. He likes a challenge. He's a competitor. Cliche, cliche, cliche, I know. But also, all true.

High End: Landry has collegiate All-American potential. Rivals compares him to Ryan Broyles, which I think is a pretty solid comparison. Both are smallish guys without great speed but catch the ball well and run great routes. However, I'd rank Landry higher than Broyles in terms of an all-around player, due to his blocking. NFL is a toss-up due to his slight stature. Personally, I think he'll turn himself into an NFL-caliber player, but I don't have the same confidence as I do with players like Freak and La'El.

Realistic: I think an All-SEC type of career is in order. He could challenge for All-American, but so much of WR play is rooted in QB play, so it will depend on how the offense develops and evolves under Kragthorpe. Landry will play this year, though it remains to be seen how much this recent injury will slow his development.

UPDATE: As 1st reported by Hunter Palmer at BBI, Landry suffered a stress fracture and could be out for 4 weeks, which would be nearly all of preseason camp