Remain Calm! There Is Nothing To See Here!

Share All sharing options for: Remain Calm! There Is Nothing To See Here!

Last week was not exactly a banner week for LSU football.  To review, LSU got placed on one-year probation, ESPN ran a story claiming the video we received from William Lyles was worthless, and then Russell Shepard bailed on Media Days because, as it turns out, his housing arrangements may ran afoul of NCAA rules.

Taken individually, none of these stories were that big of a deal, not even the probation considering the NCAA essentially accepted LSU's self-imposed penalties and then lauded the work of our compliance Office.  If you're going to get hit by the NCAA hammer, that's the way to do it.  You can't stop every rules violation, but you can prevent that rules violation from bringing the program down.  As we've learned repeatedly in both politics and sports, it's never the crime, it's the cover-up.

So, at the risk of being LSU's new Baghdad Bob... 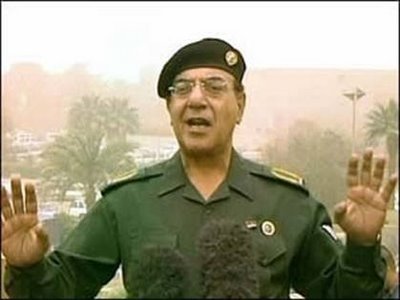 Everybody, chill out.  There really is nothing to see here.

There's no football right now, so of course we have nothing to do but obsess over every little thing.  And the NCAA snooping around is one of those things that rightfully makes any fan worry.  So, here is a quick primer on why none of these stories are reasons to step out on the ledge.

Obviously, probation is bad.  You'd rather not commit the violation in the first place, but the ship sailed a long time ago.  Given that the violation occurred, there's simply no better way to respond to the situation than LSU's response.

First, it was LSU that uncovered the violation through the Compliance Office smelling something fishy and actually doing some digging.  Our internal checks worked, and when the answers to the initial investigation didn't add up, our Compliance Office made sure that the player didn't travel to the season opener and didn't play until the recruiting issues were cleared up.

Unfortunately, Hicks' recruitment did violate NCAA rules.  So instead of sweeping this under the rug and hoping it went away, which honestly might have worked, LSU self-reported to the NCAA.  We didn't just co-operate with the investigation, we started it.  The player never saw the field, the coach responsible was fired, and the school self-imposed a two scholarship penalty.  This is how the system is supposed to work.

The NCAA agreed and despite bringing down the dreaded P-word, the NCAA praised LSU's compliance office for a job well done.  LSU did everything you would want your school to do in this situation.  Next time, let's not have a coach blatantly violate NCAA rules, but the key takeway is that the system worked.  And the penalty was retroactive so we essentially got two scholarships back for this year, as the NCAA raised the limit from 83 to 85.

Here's a helpful rule of thumb to determine whether you should worry about a story: if you assume that every detail in the story is 100% accurate, what does that mean for LSU?

Case in point, ESPN's story regarding the quality of the recruiting video received from Lyles, even if true down to the last detail, meant jack squat.  You mean LSU paid $6000 for video for Kansas and California prospects, and then they actually RECEIVED said video?  Which contained, shock of all shocks, video of Kansas and California players?

So ESPN didn't think "some" of the video was any good.  Among the 32 DVD's, some of the film was objectively worthless.  Oh, but it also included video of Mettenberger.  LSU received the discs in October of 2010, which pretty much precludes any chance it was payment to Lyles to exert influence over Lance Seastrunk, given that he was a freshman at Oregon at the time.

Essentially, the ESPN story was that LSU paid for DVD's, received DVDs, and some of those 32 DVD's sucked.  The fact Lyles may have stolen some of his film from other sources does not mean anything for LSU, though it could mean further trouble for Lyles.  The mere fact ESPN confirms that LSU received tape on Mettneberger shows we got value, and probably one of the few parts of the tape our coaches cared about.

Hell, even if half of the film was worthless, it was probably still worth $6000 to LSU's coaching staff just for the film on the few players it was targeting.  Saturday Night Slant more thoroughly destroys this story, so go read his take.

The key here is not that ESPN is lying, ESPN is likely telling the truth.  It's just that even if the story is completely true... so what?

Housing is definitely an issue that can trip you up, but this is just another instance of our compliance department being proactive.  Rosetta broke the story and even he is aying that this won't have any logterm consequences.  OK, Shep might have to sit out a game or two, which would absolutely suck, but the team isn't committing violations and Shep may not even be out of compliance.

Once again, its our internal checks actually working.  You want the compliance division to find these minor violations because the NCAA rulebook is so massive and complex, it is literally impossible for a program not to be violating some minor rule at any given time.  The key is finding out about these violations and bringing the school into compliance before it becomes an issue.

This story is nothing but the school doing their job.  Our Compliance department has earned the benefit of the doubt, and they have every reason to be ultra-cautious right now.  They are acting accordingly.

We're a little over a month away from actual football.  That's when the silly season stops and we can stop panicking over every tiny news story.  In fact, you shouldn't panic now.  Go outside, walk the dog, hang out with your significant other... whatever.  Just chill the hell out.