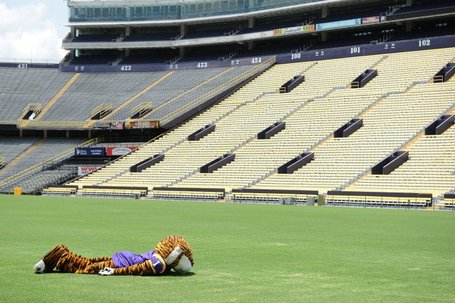 In an interview with a Portland sports talk station (mp3 link) Willie Lyles spoke for about an hour on a multitude of topics, mostly Oregon related. However, at the 31 minute mark he and the host get around to LSU, during which there was a SHOCKING REVELATION OF....something. The host asked if he'd ever escorted prospects to LSU for visits, to which Lyles replied:

"You know, In eight years of working in scouting and working for bigger companies and doing different things in scouting, you get a chance to see a lot and you get a chance to do a lot and it's just one of those things to where you see a lot of things that go on and that's just something that I actually don't want to even touch on at this point and that's just how it is. I haven't decided on what, you know, information I do want to talk about at this point as far as dealing with them. I don't want to say anything that would be out of line and out of turn as far as my dealings with LSU"

As for the rest of the LSU related stuff in the interview (and trust me, you don't want to have to listen to it. Oregon sports talk is just as ponderous and unbearable as it is everywhere else)

Who knows what, if anything, will come of this. Somehow, I don't think LSU is out of the woods on this yet.

On to better news. Kevin Gausman had a great outing for Team USA against Japan yesterday in Durham. He pitched 5 2/3, giving up 3 hits, one run, and 7Ks.

SS Commit and 1st round draft pick Trevor Story has agreed to terms with the Rockies. Both Ben Alsup and Matty Ott have begun their pro careers in Class A ball. JaCoby Jones and Kurt McCune were named 2nd team Freshman All-Americans by Baseball America. And Mikie Mahtook STILL hasn't signed with the Rays yet.

LSU is one of 3 SEC teams picked by Baseball America to reach Omaha next year.

The Times-Pic does a great job each week keeping tabs on locals in the Majors. In this week's update: Ryan Theriot is filling in nicely for Pujols, Furbush and Coleman are having great early careers in their respective bullpens, and The Beard takes out some anger on a cooler.

In an interview with Rivals.com yesterday, Miles shared more about why he hired Kragthorpe and how he's already helping Jordan Jefferson's game.

Nikki Caldwell's California connections are already paying dividends in recruiting, with the signing of former UCLA commit Sheila Boykin, the first WBB player from the state to sign with LSU since the early 90's.

LSU has two entries in this year's class of the Louisiana Sports Hall of Fame: Baseball great Todd Walker and The Father of Saturday Night and the true genius behind the "Dorms as Stadium Expansion" idea, AD Thomas "Skipper" Heard.

There are 3 Former LSU players on the opening day CFL rosters: OL Peter Dyakowski (Hamilton), DB Daniel Francis (Hamilton), and DT Claude Wroten (Toronto). The team with the most Louisiana players is the Edmonton Eskimos, with guys from Nicholls, McNeese, and NW St.

If you need to release information to the press about over 40 secondary violations that occurred in just 2 years, when do you release the report to the public? If you're Alabama you do it midnight on Friday before a 3 day weekend.

Speaking of the Bammers, there is still time to vote in RBR's annual "Who's Getting Fired?" poll. The Right Reverend is the early leader.

Here's an odd list. Eye and Eer ranks the Top 25 "Toughest Players to Plan For" and ranks Morris Claiborne #1.

And finally, here's Mike #planking on everything.