As you probably know, we here at And the Valley Shook usually embrace the mud-crusted, bourbon-soaked barbarian hoard image of the LSU fan. And good eatin' is a big part of that. With that in mind, and some ample support from the readership, we commence with the official ATVS recipe series. We're going to try and make this a weekly feature, highlighting some classic Cajun and Creole recipes for the home or the tailgate. We would love to get reader contributions (in fact we'll probably need the help), and for that you can send your favorite recipes to atvsrecipes@gmail.com. Hopefully everybody will enjoy it.

For the first installment, we're going with my very own recipe for Chicken Stew. This is an old Cajun country dish, hearty and great for cold weather, and like most stews it's served over rice. It's also the sort of dish that gets better with time. Back in the day, a lot of households would use it as a change-up for red beans & rice on Mondays, because it can simmer for hours while Momma did the laundry and other household chores. Everybody kind of has their own spin on this recipe, mine comes mostly from convenience during my single days. It originated as a chicken ettouffe recipe from John Folse's Encyclopedia of Cajun & Creole Cuisine, which I improvised on one night and turned into more of the classic stew. I usually eye-ball it, in terms of the proportions, but here's some that work for a standard recipe that will serve 6-8 people. 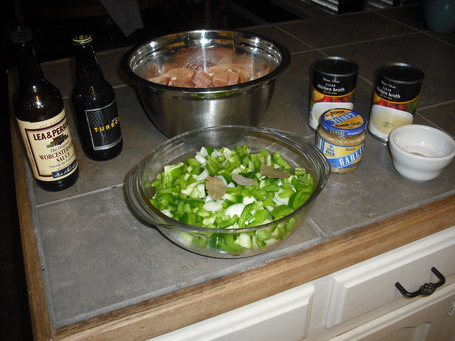 1. To start off with, cut up your chicken into serving pieces (small chunks if you're using breasts). Combine the garlic powder, black and red pepper in a mixing bowl with the worcestshire sauce, and add the chicken. Marinate for at least 45 minutes to an hour. Obviously the longer the chicken sits in the marinade, the better. I've also substituted a couple teaspoons of your favorite Cajun seasoning like Tony Chachere's or Slap Ya Mama in a pinch. I should further note that this recipe is a little lighter on the pepper than I typically prefer, as not everybody is born with the Iron Stomach of Hephaestus, as we Gomilas are. If your constitution can stand it, I highly recommend tossing in some extra teaspoons of either the black or red peppers.

2. Next come the five most important words in Louisiana cooking: first you make a roux. A roux is a mixture of oil and flour that is the backbone of almost all Cajun cooking. One of the principle differences between Cajun and Creole cooking is the oil-based roux -- Creole chefs in the city had more access to things like butter for these recipes, whereas the folks out in the country relied on oil or animal fat. It's made by heating the oil and whisking in an equal portion of flower, and cooking until the desired color is achieved. I suggest medium/medium-high heat, and use a large skillet or sauce pan for this recipe. Here's a quick how-to guide:

a. Heat the oil in a skillet or sauce pan (cast iron, of course, works best). Experienced chefs will do this over high heat, but if you're a novice I suggest starting low and slowly increasing the heat as you go. It can take a while at lower temperatures, but you can also make excess and save it in something air-tight like a mason jar. 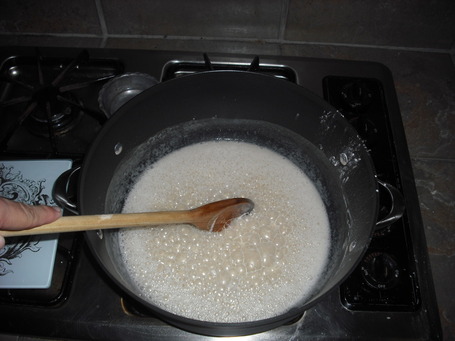 b. Stir continuously, with something long-handled, like a wooden spoon or a metal whisk (this is important because if anything splatters, the flour will cause that very hot oil to stick to your skin -- it can't be stressed enough to be careful when stirring). If you feel the cooking is getting a little out of control, you can remove the pan from the burner and keep stirring in order to bring it back under control. Once again, a burned roux is a ruined roux, so this is something you have to watch over carefully (if you do in fact ruin it, remove it from the pan into something heat-proof to cool before you throw it away, and start over).

c. Cook until your desired color is achieved. The color of your roux varies inversely to the type of meat you're cooking it with -- the lighter the meat, the darker the roux. Meats like chicken and seafood call for a dark brown or even a reddish-brown (although I wouldn't suggest trying to cook a reddish-brown roux your first time out, as it'll be very close to burning stage when done), whereas beef, pork and game meats call for lighter brown rouxs. In this case, I went for a rich, caramel color.

d. Once the desired color is achieved, you can add your desired vegetables for sautéing. They'll absorb the heat and stop the darkening process.

3. Once the roux is the desired color, add the onions, bell peppers, celery and bay leaves and sauté until wilted, stirring occasionally. A lot of people will add the minced garlic here, but one thing I've learned is that overcooked garlic is a little bitter, so it can be better to wait to add it until later. 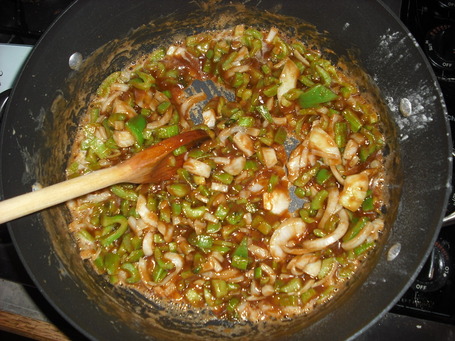 4. Add the two cans of chicken broth and the beer, slowly, stirring the mixture constantly, so that it incorporates well. Any beer will work, really, but I prefer dark beers and I used Abita Turbodog here (makes for an excellent meal pairing as well). I really think the richness and the dark, almost chocolatey flavor really adds something. I've had some great experiences using some nut-flavored ale as well, like Lazy Magnolia's Southern Pecan, or Abita's Pecan Harvest seasonal. Make sure to add the beer slowly while stirring, as it will foam up. 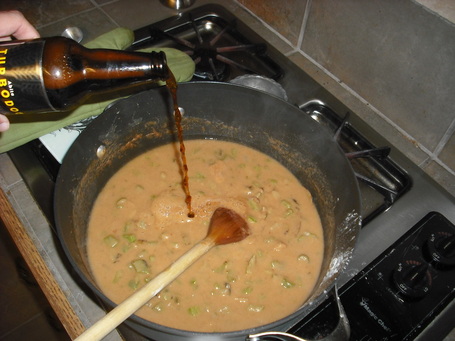 5. Increase heat and bring the mixture to a rolling boil for 10 minutes, stirring occasionally.

6. Add the chicken and marinade all together, then the minced garlic. Return the stew to a boil, then reduce heat and simmer for 45 minutes to an hour (again, the longer the better). Serve over steamed rice. Serves 6-8. 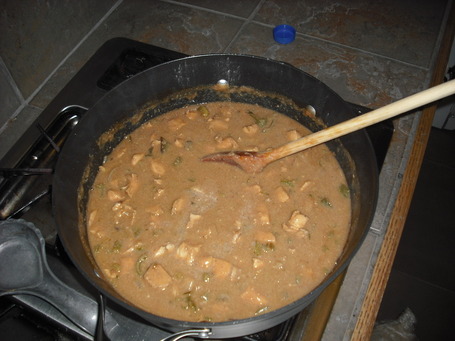