August. It's finally here. There is exactly 1 month until the beginning of the College Football season, which means it's well past time to begin previewing the upcoming season. Every few days we'll preview a team on LSU's schedule, followed by a mini round-table where we'll give you our takes on the important aspects of the game at hand. Each preview will have a poll where we'll ask you to pick the winner straight up. First up, Oregon 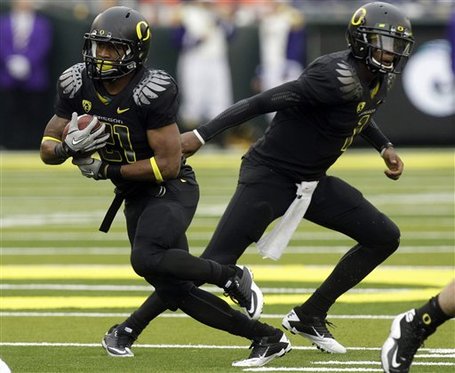 The reasons you are having nightmares about this game.

Everyone rants and raves about Oregon's high-tempo, high-scoring offense and the praise is well deserved. Held under 40 points just 3 times last year (Auburn, Oregon St., and inexplicably Cal), Oregon decimated most of their competition, including an impressive streak of averaging more than a point a minute through the early part of their season. In fact, with no other method of slowing them down, a few Pac-12 teams resorted to faking injuries (as perceived by Oregon coaches and backed up with embarrassing video evidence) to try and unsuccessfully slow them down. Oregon favors the rush, but their air attack is very potent . Returning JR QB Darron Thomas was second in PAC-12 passing behind only Heisman finalist Andrew Luck with 2881 yds on 222 pases for 30 TDs and a 61% completion rate. He's also a genuine run threat with 486 yds on 93 attempts last year, good enough to be the Ducks 3rd leading rusher.

Which is impressive when you consider the Ducks leading rusher, Heisman finalist JR LaMichael James. The PAC-12's leading rusher by more than 300 yds, James gained 1731 on the ground for 21 TDs, averaging nearly 6 ypc. With him in the backfield is JR Kenjon Barner (551 yds, 6 TDs, 6.1 ypc) and a few highly touted newcomers, including Lache Seastrunk coming off a redshirt season. Keeping this ground game under control will be the priority for LSU, but Thomas' exceptional passing ability makes a full sellout an impossibility. Such is the task for Chavis, but I think we're all glad he can spend a lot of the summer figuring it out. 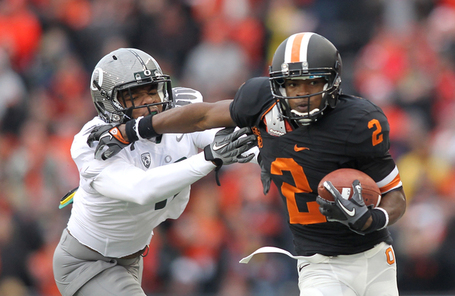 It's a case where what might be a highlight is overshadowed by the rock-star status on the other side of the ball when talking about Oregon's defense, but that doesn't mean there aren't concerns. Oregon's pass defense was not always consistent last year, giving up +250 yds 5 times, including 341 against Stanford and 448 against Arizona, both at home. With the Harris suspension, Oregon will also be without both of last year's starting CBs. The Ducks D-Line was a bright spot, holding opponents under 150 yds on the ground all but 4 times, the worst being 254 yds against the Fightin' Cam Newtons in the BCS game. There is concern here too, though, as they lose 3 starters on the line, 2 of them All-P12 2nd teamers, with a combined 42 TFL last year. Oregon has had success in the past when adding new faces on the line, but replacing that kind of production won't be easy. 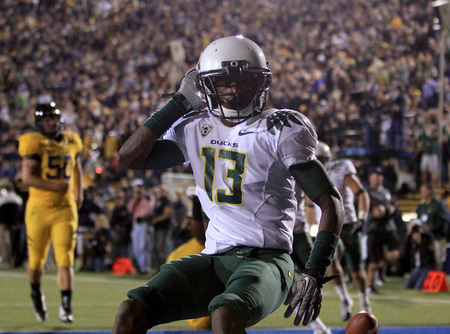 Thanks to going +100 in a rental car of dubious origins, CB Cliff Harris will be suspended for the game, hurting the Ducks passing defense and, more importantly, taking away a weapon on special teams. Harris had 546 yds on punt returns last year, averaging 18 yds a return and scoring 4 TDs, numbers that are better than even Patrick Peterson did last year. RB Kenjon Barner, who had a PR TD himself last year might be his likely replacement, but we wont know for sure until game week.

No video, photos, or even a game recap that I've been able to find. After two matchups in the 30's, Oregon returned to Death Valley in what would seem like an oddly timed matchup today, but was really a cupcake game. It was Oregon coach Rich Brooks' (yes, that Rich Brooks) 1st year with the Ducks, in the middle of a dark time for the program. Oregon hadn't seen a bowl in more than a decade and wouldn't until the 1989 Independence Bowl. Notable LSU players include former QB and current TE coach Steve Ensminger and a little known running back by the name of Charles Alexander. It was the first year of the last significant change LSU ever made to the uniforms with the change to the current helmet design. In the interim, Oregon has had 263 different uniform combinations.

Jordan Jefferson had one of his best games on the turf in the JerryDome last year, but now we've got Kragthorpe. Can the magic continue without "The Wizard"?

Paul: Jefferson's play really improved down the stretch last season, particularly his deep ball. KC Joyner wrote a really nice piece back in February about how Jefferson's YPA on deep passes down the stretch last season was higher than Sam Bradford, Colt McCoy or Jimmy Clausen at any point in their careers. Of course, this is a small sample, but I think we'd all agree his play was better as the season wore on. He's become such a whipping boy though (bringing some of this on himself), that his accomplishments are often overlooked. Most are taking the cautiously optimistic approach, saying "We've heard all this before." Well yes.. and no. We've heard he looks "better" and mostly from Miles and co. trying to protect their own. But this off-season national journalists and analysts from Jesse Palmer to Charles Davis chimed in on how improved he looks. That's promising. People write players off a lot, Jefferson has certainly earned that stigma. But I expect good things. He's a senior playing on a National Championship caliber team. That has a way of bringing out the best in a lot of people. He started the UNC game strongly before the team went into chill mode... I would not be surprised if he came out firing against Oregon.

Poseur: Really? Am I on Candid Camera?

My general dislike of Crowton could not have been more clear, so I think just about any OC is an improvement. Krag1N1 doesn't have to be some genius, he merely has to be competent - and that starts with simplifying the playbook. The biggest problem for LSU has been confusion at the line, and I think we'll see a far more confident and crisper unit. People will know where to line up, at the very least.

Even the Cotton Bowl, Crowton's Last Stand, had some classic Crowtonian play calling. I almost killed a man during his goal line sequence, in which he forgot that Spencer Ware was busy being awesome. Crowton's play calling could be described in one word: cute. Krag1N1 needs to get us away from cute, and to doing what we do well - handing the ball off behind a pretty terrific offensive line. Over and over again. Nothing cute, just brutality. JJ needs, oh God I'm going to say it again, swagger. And that means attacking relentlessly. Right down the other team's throat, which is a style that I think suits JJ.

Billy: The more I watch those Cotton Bowl highlights again, the more I think we'll see something very similar in LSU's second trip to the Jerra-Dome. Heavy on the run, heavy on the play-action passing, with a lot of bootlegs and roll-outs worked in. When you have a veteran offensive backfield, offensive line and a talented group of receivers, simple is better. My guess is that's the contribution from Kragthorpe this year.

I don't know that anybody truly believes the Jordan Jefferson hype fully, and they probably shouldn't. All the talk from reporters and players in the press is definitely different from last year to this year, but until we're seeing live game action, it's just talk. Of course, he wouldn't be the first quarterback to explode a year after Gary Crowton left town, something our Duck counterparts know well.

More entertaining matchup: Oregon on offense or LSU on offense?

Paul: With Oregon losing Cliff Harris and not exactly being a defensive powerhouse in the first place, I'm actually a lot more interested in watching our D match up with their O. I think we'll score points successfully. Chavis is routinely thrown into the mix as a guy who "can't stop the spread option." The LSU D's performance against Auburn last year doesn't help amend that opinion. Keeping pace will be important, as we are all aware of Oregon's furious offensive style. We've got the team speed to keep up. We've got the depth. Will the scheme be there? I think the quality + quantity of capable, athletic defenders for LSU should be enough to help them keep throwing bodies at Oregon.

Poseur: Oregon might have the best offense in the country and LSU might have the best defense (don't take this as an authoritative statement - I know there are other contenders). That is clearly the marquee matchup of this game: strength on strength. Now, the LSU O vs. the UO D might more interesting, in the sense that no one really knows what's going to happen there, but the power of the team's going up against each other should be a ton of fun.

Let's not be SEC homers here - Oregon is a great football team, especially on offense. That team is loaded, particularly at the skill positions, and there's no chance we entirely shut them down. The Ducks are going to score points, the key is to keep them around 20. I don't think we can win a high-scoring shootout. Watching the two team's best units slug it out should be some compelling football.

Billy: More LSU fans will probably be watching the offense, but let's be real, this is one of the best offenses in the country, and how LSU contains it will be the ultimate story of this game. I say contain because the chances of "stopping" an outfit that led the nation in scoring just a year ago seems nigh-impossible.

Yeah, Oregon's breaking in three new offensive linemen, but the Tigers aren't exactly a group of seasoned vets on the defensive interior. And that's my biggest concern. Sure, there's tons of talent at defensive tackle and middle linebacker, but we're talking about a group of sophomores and freshmen that get to start their first season in the driver's seat of the LSU defense against a Heisman Trophy finalist. Can Michael Brockers, Josh Downs or Bennie Logan be the type of disruptive force that Drake Nevis was last year, whether as individuals or as a unit? I'd like to think so, but they're diving into the deep end of the pool on their first try.

That new D-Line for Oregon just screams "The Spencer Ware Show" doesn't it?

Paul: I'm not ashamed to say Spencer Ware will be a star. This will be the first step (or the 2nd I guess, after the Texas A&M game).

I agree with your leading question. Especially because I argued that Krag1N1 should be instituting the "no subtlety" offense. Make Oregon prove they can stop our run game. It's not just Ware, it's our offensive line, which really makes me excited this year. I love our line.

Billy: The new defensive line, the new linebackers, and the fact that one of the best ways to limit a good offense is to try and keep it off the field with your own attack. We're in unanimous agreement that Ware is the breakout star of this team. Is there any better way to break out than against a top-five team in front of a national television? 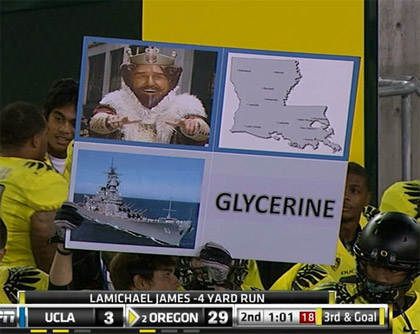 Billy: Can't we just photoshop a Tiger into this picture? Someone call LSUFreek! 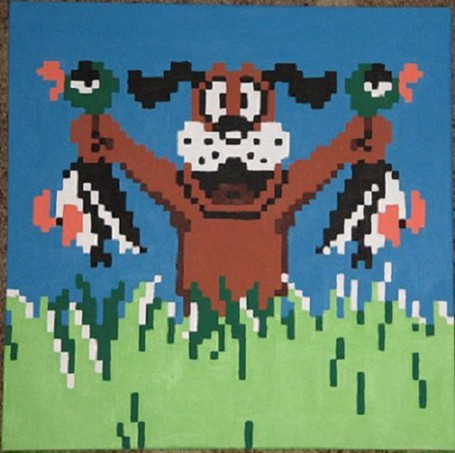 There is tons more analysis to come on the Ducks over the coming weeks here on ATVS. For coverage with a more Mallard-based slant check out our SB Nation bros at Addicted To Quack.