This is the second part of a preview series of LSU's season opener in the JerraDome. You can view part 1 here, and I can't thank the great work of sites like Coach Hoover, Trojan Football Analysis, Shakin' the Southland, Tomahawk Nation and Football Defense enough.

Yes, I know that starting a discussion of how to defend a high-powered offense with "it all starts up front," ranks pretty high in the Football Cliché Internet Power Rankings. Right up there with "bend-but-don't-break defense," "BeamerBall!" and "Craig James Killed 5 Hookers While at SMU."

But it's true today, it'll be true on September 3, and it'll be true 40 years for now. Successfully defending any offense starts from the A-gap out, and from the defensive line to the deep safety. The Ducks are no different. Last season, three teams held Oregon under 245 rushing yards last season: Arizona State (125 yards), California (162) and Auburn (75). All three did it by winning the line of scrimmage, and those three games were Oregon's two closest wins (the Ducks needed a pair of defensive touchdowns to hold off the Sun Devils 42-31, and scored just one offensive TD against the Bears but held on 15-13) and of course, the 22-19 loss in the BCS Title Game.

Oregon has been paced by some outstanding offensive line play the last few seasons, and with three new starters entering this season, it's the one part of their offense that might be vulnerable. LSU returns just two regular starters from last season, but five players that have some starting experience. And of the newbies, Michael Brockers, Barkevious Mingo and Josh Downs all saw action in at least 12 games last year. So while this isn't a terribly inexperienced unit, it will have to grow up quickly.

All three of the teams listed above got tremendous production from their lines (at least 16 tackles from the starting four, with 4 or more tackles for loss) while allowing their linebackers to flow to the ball free from blockers. And that speaks to the important key of defeating a good zone-blocking offensive line -- balancing the need to get up the field without over-pursuit.

Zone blocking, in the literal sense, consists of lineman blocking areas of the field, rather than individually targeted players. It was developed to counter increasingly athletic defensive fronts, and is designed spread the defense laterally to create vertical creases for the running back. A well-executed outside zone play, also known as the stretch play, will almost look like a five-man dance step by the offensive line. For more information, Bud Elliot has a great tutorial over at Tomahawk Nation.

The most common block associated with zone is the reach block, in which an offensive lineman's first step is lateral, designed to get his head on the outside hip of his man (in whichever direction the play is designed to run), and his outside hand targets the outside shoulder of the defender, looking to turn him and create an alley. Ideally, the defense will get moving in one direction, and either the offense sets the edge and allows the back to get up the field, or creates a cutback lane on the weak side.

For the defensive linemen, beating these blocks is all about getting off the ball quickly (that's pretty much ALWAYS the key) and using hands to establish good position (this means inside hand on the breastplate, outside hand on outside shoulder). From there, the key is to get upfield push and maintaining leverage towards your gap responsibility, while also getting in position to shed and make a tackle. Here's some good instruction from a very young Rex Ryan:

The defense wants to make those offensive linemen play on the other side of the line of scrimmage. If they can get vertical, than the offensive players can't. Per Coach Hoover's blog, you want to be at a 45 degree angle from the line of scrimmage. Zone running is about the running back spotting the right hole in traffic and exploding into it. The more the offensive line is pushed off of schedule, the slower the back's decision making becomes and your defense has a clearer target for pursuit. Here's another video that shows a solid defense of the stretch play:

You see the end player on the Giant's line (here it's a linebacker, but in other sets it might be the defensive end, and sometimes it might be a DB) engaging his man on the offenses' side of the line of scrimmage, setting the edge and forcing Arian Foster to cut the play inside, where there was much less room. Gap responsibility is huge, as the back will be looking for as much real estate as he can find, and maintaining outside leverage and setting the edge on your own terms is huge for the defense. And on the backside, defenders must remain in containment position while still pursuing. 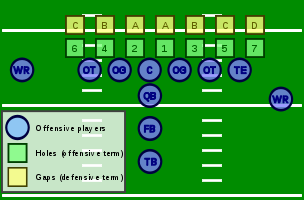 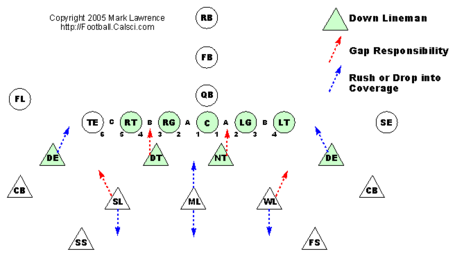 Of course, you still have to be mindful of over-pursuit, as the offense will be looking for cutbacks, and as we've discussed, it's something that Chip Kelly will take advantage of when he counterpunches. One of his favorites is adding a midline read to one of these zone runs. We saw this with Auburn last year -- a defensive tackle is left unblocked, and the quarterback reads him for the keep/give. If the tackle pursues the back, he simply runs to the open gap. If the DT sits home, he hands it off. Depending on the formation, this could be the three-technique or the nose. The important thing to remember in this scenario is a concept called "block down, step down."

Per Coach Hoover, this concept was popularized by the Jimmy Johnson Miami Hurricane squads for their games against the Barry Switzer Oklahoma wishbone offense. The wishbone often uses a midline read on triple option plays (and Oregon also began using something of an inverted wishbone formation against Auburn). When a defensive tackle feels the man in front of him (the guard if it's a three-tech DT, the center if it's the nose) leaving to attempt to block down to a linebacker, he steps down hard into his assigned gap. Against a triple-option play, this will essentially remove one of the options (the dive), and against a shotgun veer read, it will force the offense to continue outside. From there, it's up to the rest of the defense, especially ends and linebackers to continue to funnel the play outside while not allowing the ball-carrier up the field, and make the tackle. The key is to keep the offense moving in the direction it doesn't want to go -- horizontal, rather than vertical.

For defensive linemen facing Oregon, the opportunities to make plays will be there, but it's going to require LSU's defensive line being incredibly active and on point. That will mean winning their individual matches with the Duck line, and also keeping Oregon's blockers busy so that other defenders can make the play.