Dwayne Bowe. Buster Davis. Early Doucet. Michael Clayton. Brandon LaFell. Josh Reed. The reputation of LSU as Wide Receiver U over the past decade is well known. The story is built on the backs of the "big" WR. Most of the above check-in at or above 6'2. All of them weigh-in at over 200 pounds. None of them profile as speedsters or will known for being particularly elusive and shifty. They make their bank being big and strong, and most of them are known as competent blockers (at worst). Terrance Toliver followed these foot steps, being a 6'5, 5-star recruit, but failed to ever live up to his recruiting hype. Rueben Randle seems to be the next heir apparent, but he's yet to fulfill his great promise either (though he's shown plenty of flashes and this could largely be attributed to inconsistent quarterback play). It seems LSU just manufactures these types, right off the factory line. 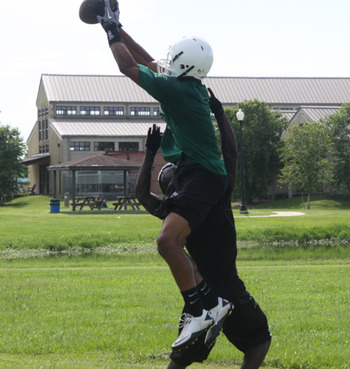 Can ODBJr. be the small WR star we've all been waiting for?

Yet, in the past few seasons, there is a gradual shift to the addition of smaller, more elusive WRs. When you mine the rosters from about 2000 on, there's nary a small WR that sticks out. Skylar Green is perhaps the most successful, and he never amassed more than 600 receiving yards in a season. His primary value came as a returner. The rest are hardly memorable. But could Odell Beckham Jr. be the man to change all that?

When Russell Shepard was recruited in 2009, opinions were split on his future. Would he be the next great dual-threat QB at LSU? Or is he more likely headed to a WR/RB role? The latter ended up being the truth. Thus far, the seams of the transition show through. Explosive plays followed by mental lapses and patches of disappearing from entire games. The promise is there; the consistency is not. Yet, two years remain to right his career.

Beckham Jr. comes to LSU as a WR/DB prospect. Early in the recruiting process he, perhaps unfairly, earned the label of "raw." His counterpart, Jarvis Landry, became known for his route running and refined skillset, while Beckham was the sensational athlete with an unclear future position wise. Many believed LSU saw him as a DB prospect while Beckham Jr. made it known he wanted to play WR. The recruiting process dragged on longer than many anticipated, but as it wore on it became increasingly obvious that there was only one choice.

In January, Beckham earned a chance to play in the Army All-American Bowl, a platform which gave him the opportunity to be seen in person by national evaluators, many of whom had only seen him on tape. Suddenly the question marks began to disappear. Beckham flashed superb route-running skills, showing a knack for finding the holes in the defense and getting separation from defenders. Even better, unlike most speedsters, Beckham displayed a sticky set of hands. He impressed over and over again, even earning honorable mention for "Best Hands" by Rivals evaluators.

The simple fact is, Beckham comes into LSU with the speed and explosiveness of a guy like Russell Shepard, but also refined route-running and catching ability that will get him into the mix early on. Miles' repeated compliments of Beckham as a standout, only affirm that notion. Many thought Beckham could be headed for a redshirt and that Jarvis Landry would be the first of the two to see the field. It now appears that both will and with Landry's injury, Beckham many even have the inside track.

I do believe Beckham can be the first "small" WR star to come from LSU in some time. Jarvis Landry also fits the bill, though his skill set profiles more as a "big" WR. Landry is tough, tenacious, run blocks like a demon, works the middle and hand catches. Beckham doesn't display the same blocking prowess, but flashes speed to burn with good RAC ability. They complement each other quite nicely, really. Over the course of their careers, I could see Landry developing as the "safety" valve guy, who will always be there when you need a 1st down, while Beckham becomes a big-play artist. That is not to say that either of the two can't do the other, just that they profile differently.

Finally, like Landry, there are some bloodlines at work here. Beckham's father played ball at LSU, and while you sometimes see players recruited based on name alone, this is very often a positive attribute. Both of his parents were standout athletes; he's grown up with sports, so chances are he'll be physically and mentally prepared, more so than others.

High End: Beckham has a chance to be an All-American WR. Though he's slight in stature (5'10", 175 lbs.), he likely profiles to the next level better than Landry because he is a speed merchant. This guy has NFL potential. I think he'll be a big-time player at LSU as early as next season, and we could see flashes when he gets into the game this season.

Realistic: I see Beckham becoming one of our top two wide receivers by 2013, potentially sooner depending on how much of an impact he makes early on. He'll be in the mix this season, mostly as a 5th WR type, and next season in what should be an expanded role, but I think his junior year will be when he steps onto the field as one of the two starting WRs. Beckham's size may limit him to a slot role at the next level. He does have very good speed, but he's not quite "elite" like you need to be a small guy in the NFL (think DeSean Jackson). At the end of the day, I think he'll have a superb career at LSU with the opportunity to push for an NFL career.