Share All sharing options for: And the Valley Cooks: Arroz con Pollo

**Ed. Note: We're going to bring this recipe post back from 2011. The original recipe calls for Abita Golden, which I don't believe is available anymore. I'd suggest replacing it with a comparable wheat beer -- Parish Canebrake if you want to stick with Louisiana -- or maybe something more amber-y.**

When we started doing this, somebody requested a jambalaya recipe very early on. And while this isn't exactly jambalaya, arroz con pollo is the Spanish precursor (translation: chicken with rice). The big difference here is the presence of the beer in the liquid portion. The recipe comes from the Abita Brewing Company's book "Cooking Louisiana True," which features beer in every recipe (yes, even deserts) and some great information on the company and its beers, such as pairings, history, etc...This was my first actual experience with a recipe out of the book, but I'd say it was fairly successful. I would add that the cooking time on this is a little shorter than the typical jambalaya recipe as well. 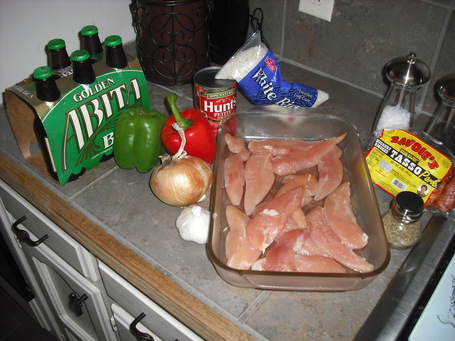 Prep notes: I seasoned the chicken with some salt and pepper, but on hindsight, I probably should have used some Cajun seasoning -- but a big part of cooking is learning new twists to your favorite recipes or learning from your mistakes. I also took some advice from Kleph and let the beer sit out to get flat before cooking with it (you might remember he noted learning that trick in the comments of this post). Abita Golden is a very typical American-style lager. In truth, it's not my favorite brew, but that's mostly because I'm much more of a fan of dark beers. 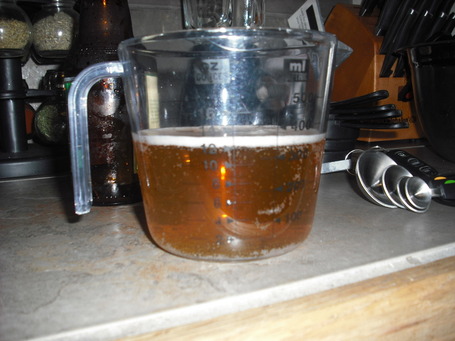 1. Heat the olive oil in a large pot or dutch oven (I suggest medium to slightly low heat, due to olive oil's low smoke point), and cook the chicken pieces until brown. Remove and place aside, but leave the oil in the pot. An advantage of using whole chicken pieces (or skin on pieces anyway), is that you can get a good brown on the meat. With breast meat I had to get it out before anything could overcook. 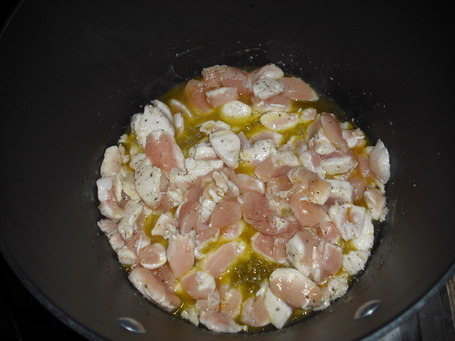 2. Throw in the tasso (or sausage), onions, bell peppers, bay leaves and green onions and cook until the vegetables are wilted. After a couple of minutes, add the garlic. I always wait to add the garlic a little late to prevent over-browning. 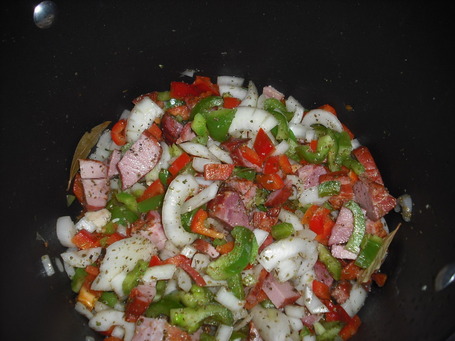 3. Return the chicken to the pot, and add the beer, tomatoes and stock. I bet subbing some Rotel tomatoes with green chilies might add some extra flavor. May try that one in the future. Bring the pot to a gentle boil, then reduce heat and simmer for 30 minutes. 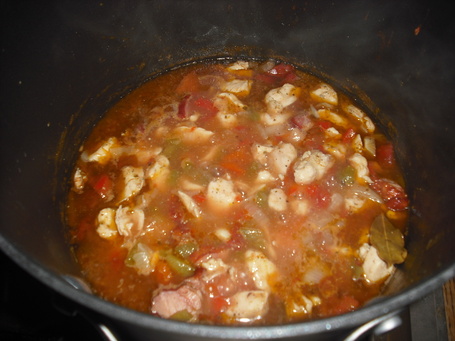 4. Stir in the rice and 1 ½ tablespoons of salt. Bring the pot back to a gentle boil, reduce heat, cover and simmer until the rice is cooked. Serves 4-6. 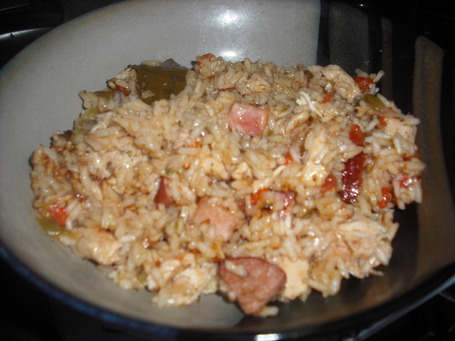