As the old saying goes, there's only two positions on the field you can never have enough of: running backs and pass rushers. There's been no shortage of running back talent at LSU for the past decade or two, that's for sure. Same goes for defensive line talent, where it seems every year we're putting a new player into the league.With the hiring of John Chavis, our defensive philosophies have taken a bit of a turn. Saban typically loaded up on big, strong DL, more equipped for run-stuffing and blocker-eating than pass rushing (there are always exceptions). Throughout Miles first few years there seemed to be further emphasis on size over speed/quickness. Chavis seems to be the opposite: Give me speed/quickness! 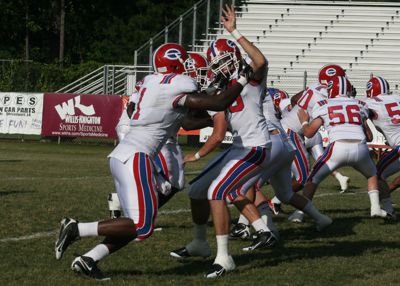 Rasco has the tools to be a very good DE at LSU.

Jermauria Rasco appears to be just the latest example of this trend.

Most everyone is familiar with the Rasco story by now. The ballyhooed Evangel Christian product, coveted nationwide who ripped open his button down to reveal an LSU jersey to much relief of Tiger fans everywhere. In truth, Rasco was somewhat of a luxury to last year's signing class. Not signing Rasco wouldn't be a disaster like, say, not signing Mettenberger may have been. We're already young and talented on the defensive line. In fact, you often have to wonder where all these guys will fit in. But that's a good problem to have.

First, let's address this outright: I have 0 concerns about the fact that he comes from Evangel. Evangel players often get unfairly labeled as "soft" or "entitled" or whatever you want to call it. In fact, a lot of LSU fans look at that school with a bit of disdain, which is unfair to the many individuals that make it up. I'm a firm believer in treating every player as a case-by-case basis, and everything I've seen from Rasco leads me to believe he's a sincere, grounded, hard-working kid. His classmates seem to admire him. He's respectful and obedient to his mother. He was a good student at a good school. These are all qualities to be admired. And frankly, it wasn't too long ago that LSU was proudly represented by a lightly-recruited kid out of Evangel that turned out to be okay...

So with that out of the way, let's talk about Rasco as a football player. His recruiting profiles say he checks in around 6'3", 227 lbs. (which was verified at a Rivals event). On the LSU roster, it shows him as 6'3", 255 lbs. Since heights and weights are often generous, what we probably have here is a 6'2 1/2" kid with broad shoulders and a light build. Not Barkevious Mingo light, but I highly doubt he would weigh-in at a legit 255 at this point. Just looking at the picture above you can tell Rasco is a lean guy, but he's also broad shouldered and the thin legs suggest he can certainly add more weight beneath the waist. This is a guy who could end up carrying 265 pounds without losing any explosion.

Speaking of explosion, let's talk about his game. Rasco burst onto the scene his sophomore year where he exploded for 26 sacks and 149 tackles. Pretty phenomenal numbers. As a junior, his numbers took a bit of a dive, but last season he racked up another 21 sacks and 92 tackles on his way to becoming the Class 2A Defensive Player of the Year. So how does that translate to the next level?

Physically, Rasco isn't as explosive as a guy like Sam Montgomery. He's no slouch, but Sam has that rare "get off" you see from truly elite pass rushers. Rasco is a guy that flashes a pretty well-rounded skill set. His frame, as mentioned, should allow him to bulk up, so he will be solid at the point of attack in the run game. But he should also be able to keep his quickness and be a force as a pass rusher. His arm length is solid. His technique fluctuates, and that's one aspect of his game which will need to be refined. His effort, however, does not. Rasco plays hard consistently, and that's something I like to see. That also lets me know that technique mistakes probably aren't issues of laziness or lack of care... he just needs more advanced teaching. When he uses his hands, he's very effective, but he doesn't always bring them effectively.

Overall, I'm not sure Rasco projects to that elite pass-rushing type that we could see from Sam Montgomery and even Barkevious Mingo. Physically, he reminds me a bit of Melvin Oliver, which I think is the type of player he could wind up becoming. He's a touch faster, and will probably play a shade lighter, however. Oliver is 3rd in career sacks at LSU, so not too shabby.

High End: All-SEC performer with a chance to play at the next level.

Realistic: I think his humility and work ethic will turn him into a very solid piece for LSU. I don't foresee him becoming a game-changer, but he'll have moments and be an nothing less than a solid starter as his career wears on. Rasco has the tools to go to the next level.