Here is the third installment of the preview series of LSU's season opener in the JerraDome. You can view part 1 here, with part 2 focused on the defensive line's burden. Once again, I can't thank the great work of sites like Coach Hoover, Trojan Football Analysis, Shakin' the Southland, Tomahawk Nation and Football Defense enough.

Of course, the next level of the defense after the line would be the linebacking corps, and its one that Chip Kelly's offense clearly places in its cross-hairs. If the linebackers aren't making the right reads at the right speed and getting to the right spots on the field, the Ducks will have some pretty big alleys to run through.

For some fans, "read" has become a dirty word when you discuss linebackers, mostly because idiots fall into the "DERP READ AND REACT DEFENSE IS FOR PUSSIES BLITZ BLITZ BLITZ!!!11!!!!1" trap. But I assure you, ALL linebackers have keys that they have to read, even when they are blitzing. Shakin' the Southland has a great roundup on keys here.

Now, I can't really speak on exactly what keys LSU's ‘backers will be looking for against the Ducks, as John Chavis doesn't really include me in his linebacker meetings, but my best guess is that the keys will be mixed up a bit between the backs themselves and the "triangle," i.e. the offensive line plus the snap of the ball plus the backs. And of course there are the tips one can learn off of film, such as a tight end's release or offensive line stance/alignment -- but those come from film study.

Here is a fantastic piece on how a 4-3 defense will align against Oregon's formations, specifically when in the 4-2-5 nickel sub-package, which LSU will be using frequently along with the 3-2-6 "mustang" package. It includes some illustrations on how the defense will align against Oregon's various personnel and formations. "11" personnel equals one back and one tight end; "10," one back with no tight ends (and 4 receivers, obviously); "22" is for two tight ends and two receivers; and of course the empty sets, which can feature 10 or 11 personnel depending on whether or not a tight end is in the game.

Once the alignment is set, the linebackers' gap assignments will change to the strength of the formation. Against most offense, the strength is usually to the tight end side, but against a team like Oregon it'll usually be towards the wide side of the field.  Alignment will generally dictate gap assignment, which in turn dictates whether a linebacker (or safety or nickel/dime back) has alley (attack up the field and engage ball-carrier), force (attack blocker with leverage in order to funnel the ball carrier towards the alley) or pursuit (backside containment/cutback) responsibilities.

From there, the linebackers have to balance patience with quickness. Ryan Baker had issues with this at times last year -- if you watch the Ole Miss or Arkansas replays, you can see him getting caught out of position or walled off by blockers on Brandon Bolden and Knile Davis' long runs. Just as the defensive line is the first domino setting up the rest of the defense, linebackers have to stay within their responsibilities, even when that means allowing somebody else to make the tackle. One of the biggest sins a linebacker can do is try to run around a block (though some outside backers are occasionally fast enough to pull this off, most linebacker coaches hate it). They have to break down, hit and shed when faced with force responsibility.

One advantage linebackers have in a spread offense is that there aren't as many true lead blockers on running plays. Guys like fullbacks or H-backs whose job is to clear the hole of the immediate gap defender. The disadvantage is that the spread formations make misdirection and getting the right defender out of his gap easier.

One of the chief ways Kelly likes to do this is with what is known as the "bash" play, also known as the jet sweep. A wide player, usually a receiver, although Oregon will use both LaMichael James and Kenjon Barner in this position as well, motions into the backfield for a quick handoff. The Ducks will generally a zone-read into mix (allowing the quarterback to pull the ball out depending how the defense reacts), and will run their base plays like inside zone, stretch  and counter off of it. We all remember Florida using Percy Harvin on this play, usually with a running back in the backfield to provide a lead blocker -- Oregon will use this look as well. Here are a few quick diagrams courtesy of Coach Hoover: 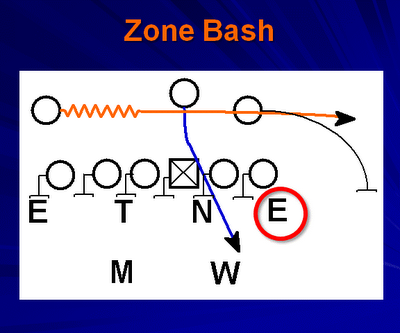 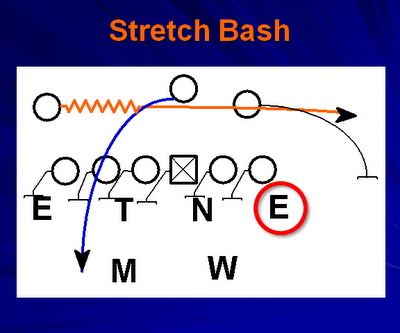 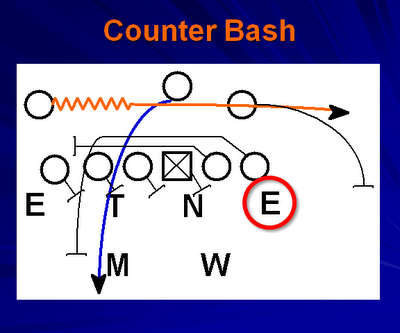 via 3.bp.blogspot.com
Ed. Note: the last diagram was a favorite of Urban Meyer, often with the motion man reversing field.

Defending it starts on the edge, with the unblocked defensive end. Teams will almost always have him close on the quarterback with the nearest linebacker filling in behind him in what is known as the "scrape exchange." When the play has a lead blocker, that linebacker will then have force responsibility to funnel the ball-carrier towards the middle/weakside backer or the safety. In the red-zone Oregon loves to switch the read up to midline (leaving a tackle unblocked instead of an end), in which case responsibilities depend on the strength of the formation and whether the nose or 3-tech defensive tackle is the unblocked man. The free safety will always have the quarterback versus an option read, but the linebackers' gap responsibilities can change. The middle linebacker typically mans the A, but that responsibility will shift to the B gap if the 3-tech is unblocked. Whether he has force, alley or pursuit responsibility will depend on the flow of the ball. If the back is aligned the other side and the nose is the read player, the weakside ‘backer will have force responsibility in the B-gap, with the free safety unblocked and one-on-one with the quarterback if he keeps.

The biggest key in all of this is mixing things up. Once Kelly sees how a defense defends one play he almost always has a counterpunch ready to go. This is also where Oregon's pace comes into play, because it gets players on their heels and guessing where the ball is going instead of reading due to the fatigue factor -- and then suddenly LaMichael James is running free for a touchdown. But the dominoes metaphor is still in effect. The defensive line sets up the linebackers, which in turn sets up the defensive backfield...