Share All sharing options for: We've Got Delusional Optimism

The offseason that wouldn't end has finally ended.  When was the last time we've gotten a bit of good news?  It started as a trickle, but now it's a deluge.  A quiet offseason is always best, but this is getting ridiculous.  We thought we were out of the woods, and then all of a sudden we're ankle deep in player suspensions.

That sound you hear right now is everyone jumping off the bandwagon.  The Sporting News has LSU as its preseason #1.  Blue Ribbon had us at #3.  Hell, the AP ranked LSU #4.  All of that was before this week, and you think any of those guys want a do-over?

It starts as a murmur, maybe a whisper.  And then it grows louder and it picks up steam.  Pretty soon we'll be hearing it everywhere.  The whispers have already started.  LSU was lucky last year and now the luck's run out.  Sportswriters across the country have already begun writing LSU's obituary, getting ready to publish that thing after LSU's first loss.  And there's a large swath of the LSU fanbase ready to lap that stuff up. 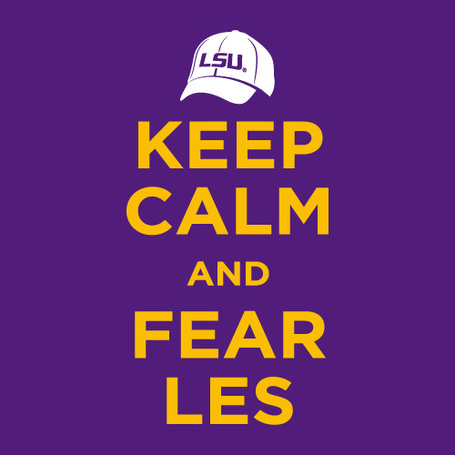 We've got Spencer Ware who, this just in, is pretty good.  This offense was always going to flow through the running game anyway.  That hasn't changed.

We've got a dominant offensive line that returns five starters and Chris Faulk, who has starting experience. Somehow, we return two starting centers.  The offense is going to live and die based upon the performance of the offensive line, which is deep and talented.  They are out there to protect whoever lines up under center.

We've got another bunch of studs on the defensive line.  We're Defensive Line U.  The torch has been passed to yet another batch of terrific linemen.

We've got arguably the best secondary in the country.  Mo Claiborne, Tharold Simon, and T-Rex are a terrifying bunch of corners.  Well, if you have to play against them.  Rooting for them is pretty damn fun.

We've got depth.  In fact, that's one of the biggest positives on this team.  This team is like a hydra.  You cut off one head, two grow back in its place.  LSU only had one player on the preseason first All-SEC team.  There are no indispensable players which means this team is uniquely suited to deal with injuries or *cough* suspensions.  Lose Jefferson?  Jarrett Lee has started nine games in his career.  Lose Shepard?  Look at all of the young, talented receivers littering the depth chart.  This team is built for a whole season, and the inevitable losses that will occur.  Everyone pulls their weight on this squad.

We've got leadership.  Brandon Taylor told ESPN,"We haven't lost our focus, and we're not going to."  Want to know why?  Because of guys like Brandon Taylor.  There are two ways to react to bad news: to mope and whine or to use at as the motivation to step up.  We're stepping up.  Because that's what Tigers do.

We've got the best fans on earth.  Not those guys who spend their days trying to think of new ways to complain about things that haven't even happened yet.  I'm talking about you.  Right now, you're thinking of a way to kill something and fry it.  You're thinking of sneaking in a full fifth of bourbon into Tiger Stadium.  You're thinking of new, creative insults for each opposing quarterback.  But mainly, you're going to yell your damn fool head off.  Because that's what fans do.

We've got a title game in New Orleans.  Look what happened the last two times that happened.  Just saying.

We've got the Hat.  In the middle of the insanity, like the eye of the hurricane, there stands Les Miles.  He is the best coach in LSU history and it's about time we all stood up and recognized it.

If you don't believe in Les Miles by this point, you're never going to.

But more than anything... I love that Les Miles plays to win.  Many coaches don't.  Coaches often coach to minimize criticism.  It is far better to lose the right way then to even win the wrong way.  Ask Les about the 2010 Tennessee game.  Or the 2007 Auburn game.  Hell, the Auburn call was 100% correct, and he still takes crap over it.  Doing something bold risks extreme criticism, even if that risk pays off.

Les is beyond your criticism.  Embrace the madness.  Delusional Optimism is back.

See you in New Orleans.

image via Tiger District (not a sales plug, we just really like that image right now)