The big news is that OG Dworaczyk is out and expected to have surgery in the next 10 days. His workload will be spread among T-Bob, Blackwell, and FR La'el Collins.

Miles also mentioned FR QB Jerrard Randall a few times when talking about the QB depth. Randall has been doing work on the scout team so far as Oregon's QB Darron Thomas, but the way Miles talks about his mobility, I'm starting to think he might have a shot at some snaps, if not this week, then later on this year.

FR WR Jarvis Landry, one of the initial four players whom the BRPD questioned, is, as far as Miles knows, clear of any judicial issues and will be available. That's good news given Russell Shepard's ongoing ineligibility.

LSU Depth Chart after the break UPDATE: shortly after Oregon released their depth chart, LSU updated the game notes with theirs 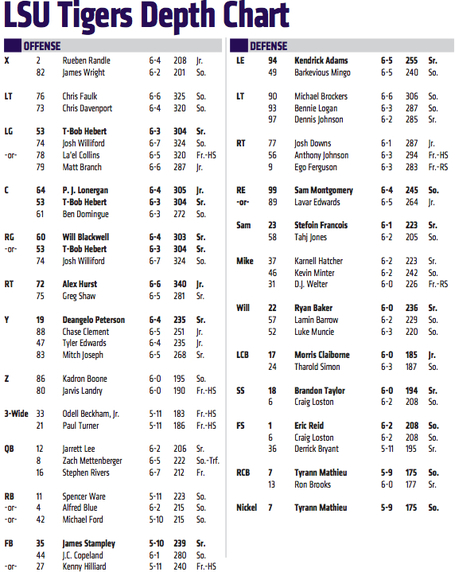