Previewing LSU - Oregon Part 4: What the Tiger Defensive Backs are Looking At

Share All sharing options for: Previewing LSU - Oregon Part 4: What the Tiger Defensive Backs are Looking At

And we've reached the final portion of our four-part series breaking down the Oregon Offense for the Tigers' opener this Saturday. Once again, I couldn't have done this without the great work done at blogs like Coach Hoover, Trojan Football Analysis, Shakin' the Southland, Tomahawk Nation, Offensive Breakdown, Smart Football and Football Defense. For a recap, check out the overview piece here, followed by breakdowns of how LSU will likely try to defend the Ducks at the defensive line and linebacker levels.

It should come as no surprise that a heavily run-based offense attacks opposing secondaries primarily with a play-action-based passing attack.  And if you've been reading this series, it should come as even less of one that the Oregon Duck air attack focuses on a handful of simple concepts mastered and executed early and often.

The LSU players that will be squarely in the crosshairs of the Ducks (an ironic twist) will be Tyrann Mathieu and the safety corps of Brandon Taylor, Craig Loston and Eric Reid.

On running plays the free safety, likely to be Loston and Reid most of the time, will play the role of alley defender on a large number of Oregon's textbook runs, especially the stretch and sweep plays. Additionally, they'll be responsible for the quarterback on Oregon's read, speed and triple option plays. This responsibility calls for them to make decisions and close on the ball-carrier quickly, and, of course, make the tackle. The last thing the defense can afford in this game is missed tackles. With runners like LaMichael James and Kenjon Barner, you won't get a lot of second chances.

As seen in the above diagram, strong safety Brandon Taylor will primarily be reading Oregon's "trips" or three-receiver formations, for one of the Ducks' primary pass concepts, the bubble screen. I shouldn't have to rehash it for any LSU fan reading this, but Taylor will be the alley defender on most of those screen plays as the outside receivers block down on the nickel and cornerbacks. He'll also have some force responsibilities on some of Oregon's inside screens -- taking on blockers to give a better flow path to the ball for the linebackers and other defensive backs.

The bubble screen plays a huge role in the Ducks' attack, both in the play-action and quick passing games. In addition to the basic bubble screen play we've all seen before, Oregon will run it off of play-action (or have the receivers act it out as a part of basic run action), and even include it in basic drop-back sets, with the outside receivers running slants or deep routes on top of the inside receiver's bubble-swing. They'll even invert the screen, with the outside wideout dropping under the inside two for a quick tunnel screen. Here are some of the concepts diagrammed via Offensive Breakdown: 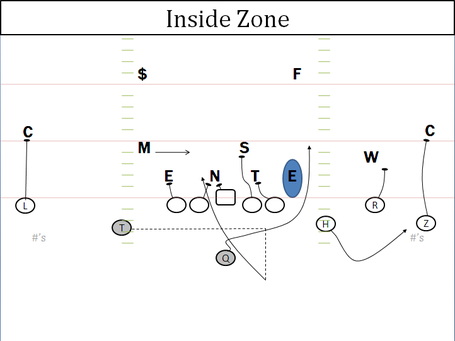 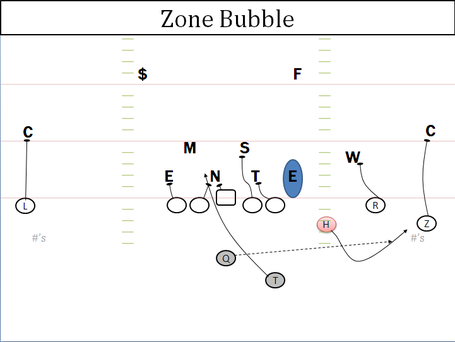 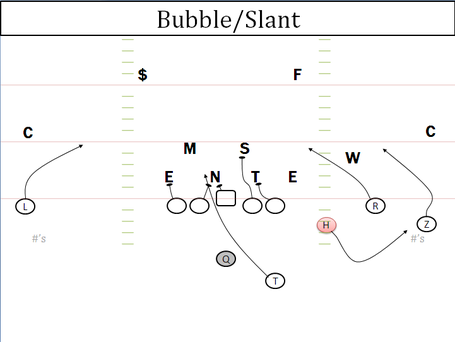 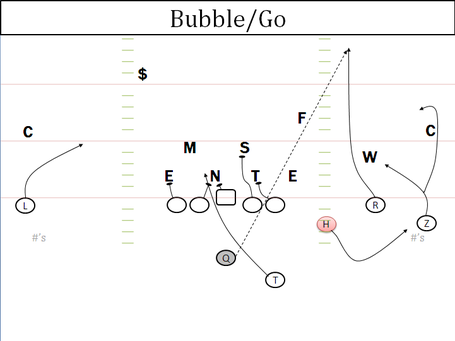 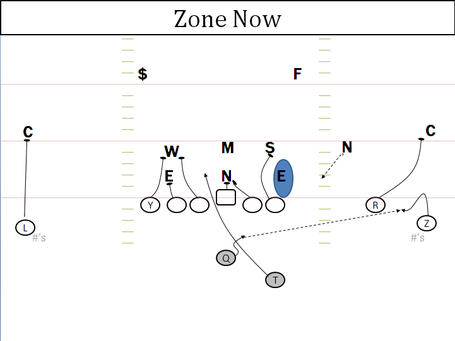 Mathieu is the X-factor for LSU here. In addition to his stellar play in nickel coverage and as a blitzer, Mathieu was able to make a couple of nice plays on the bubble screen down the stretch last season, tipping one against Ole Miss that led to a Lavar Edwards interception, and disrupting a couple of them in the Cotton Bowl. But he'll have to be on his toes in case Oregon tries to burn him with the bubble-slant or bubble-go. In those situations, Taylor will have to react quickly to back Mathieu up.

And as always, the key will be balancing making these reads quickly against getting caught on misdirection or play-action. Oregon stresses a couple of play-action concepts, usually based off of the inside-zone run. Sometimes Darron Thomas will half-roll with deep vertical and crossing patterns, and on those it will be on the free safety to avoid getting caught too far on the fake, or the inside receivers will have a lot of room in the deep middle of the field.  Here's a great example of Oregon combining play-action with the four verticals concept, via Chris Brown of Smart Football (via Doc Saturday). 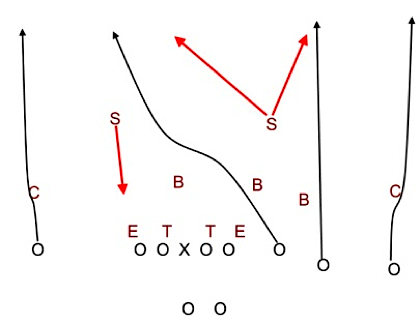 Another favorite concept out of some of Oregon's balanced looks is to motion a receiver and run a post/curl plus wheel combination. The motion man runs a basic wheel route underneath the outside receiver and up the sideline, while the other receiver cuts inside and either takes it deep with a post or sits down with a curl route. It's yet another play that takes advantage of the Ducks' pace, as they can break into it quickly while a secondary is still trying to get lined up. The playside safety and corner will have to have their responsibilities clear, so that one is in position for both the inside and outside player. It can be easy to keep a linebacker on the motion man, but against slot players like Josh Huff, that can be a mismatch. Below are a few cut-ups of the Ducks running the concept against Stanford last season.

This isn't to say Oregon won't test LSU's outside corners. Morris Claiborne, Tharold Simon (and Mathieu on occasion) will have to make sure they hold outside leverage on the Ducks' running plays, and keep themselves in position to shed and make tackles on those screens. Recognizing the route concepts as they happen will be huge.

Linebackers getting back to undercut the crossing routes or slants will be a key as well. Much like the Duck run game, these concepts will be lather/rinse/repeat at times, but as soon as the defense cheats one way a little too much, Chip Kelly will add that little twist and suddenly there's a wide-open receiver. And of course, the best defense against any passing attack is always a good pass rush...