At this very time last year, Tiger Nation sat shaking at the prospect that Stephen Rivers could potentially be our starting QB this season if injuries came crashing down, and at best would definitely be in 2012 (a daunting thought for a guy who is a long term project). The depth chart was non-existent. A planar surface. It went further out than up. And even it's peak was about as high as an ant hill. A few months later Zach Mettenberger ended the suspense and committed and signed shortly thereafter. But Les Miles wasn't done yet. Like a TE reverse on 4th down or a tricky bounce on a nearly botched FG attempt, Miles reached up into his hat and pulled out Jerrard Randall, a long time Oregon commit who the school severed ties with, reportedly due to academic reasons. Six months later, Randall is eligible and playing a vital role in helping the Tigers gameplan for that very Oregon squad which shunned him. Talk about motivated? 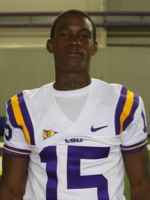 So just what did the Tigers land in Randall? I wrote a bit about it back in March. The story is well known by now. So let's put all the story aside and talk about Randall the football player (which is all most of us care about anyhow), after the jump.

There's some split opinions on what type of player Randall will become. Rivals labels him as a "dual-threat" QB. I'd call that accurate. Russell Shepard earned a similar distinction coming out of HS, but was moved to WR just a few months into his freshman season and there was little doubt that's where he belonged. To be blunt, Shepard was a special runner that could throw (a little bit... at the HS level). Randall doesn't exhibit that weakness. In fact, he's got quite the arm. Just check out the tape:

Randall is a pretty nimble runner with good straight-line speed (listed 4.48). All practice reports thus far back that up. Miles routinely praises the great looks he is giving our defense with his speed. He's got some elusive ability... he's not just a guy that can run a 40, but has his feet stuck in a puddle of mud.

But what I'm most excited about is that he really looks like a natural thrower of the ball. He's able to throw the ball deep without throwing it 50 yards up. He's able to put a little touch to drop the ball over a defender. He even throws one on a line and nails his WR in the endzone, in front of a diving defender (33 seconds on the film). Increased reps improve everyone's throwing. It could take a nothing thrower, like Russell Shepard and make him a potentially serviceable QB in the right offense. But with a guy like Randall, with this much natural ability, there's a really high end that could be obtained.

He also flashes a nice, fluid throwing motion and a quick release. Even his footwork is surprisingly fluid (unlike most mobile QBs), though inconsistent. He's used to taking snaps under center and catching them from the Shotgun. The fact that all these little elements of his game won't need dramatic overhaul (like they did for Lee.. and Jefferson... and Shepard...) really expedites his development.

The biggest strides he'll need to make are adding muscle, decision-making and consistency. Randall is seemingly generously listed at 6'1, 180. I'd say a hair shorter and maybe 10 pounds lighter. He will need to add probably 25 pounds of good muscle to be ready to play QB in the SEC, particularly the way he does.

Like most HS QBs, Randall played in a pretty simple system that probably gave him one read and asked him to freelance. He'll need to dedicate himself to knowing the ins and outs of the defense if he wants to excel. Both Scout and ESPN commented that his mechanics can become sloppy, which likely leads to his issues with being accurate. This is likely a coaching issue more than a talent one. I have confidence Kragthorpe can instill quality mechanics as a staple of his game.

Overall, Randall has a tremendous chance to be an outstanding QB for LSU, and a potential starter as a Junior (and backup next season). The tools are there, but there are question marks regarding the character. There's enough smoke about it that there probably is some concern there, but no telling what variables that involved. Being far away from home is usually a good way to put a kid in a good position to leave behind old lifestyles and start fresh. I'll take the innocent until proven guilty route on this one.

Low end: This is one guy difficult to project. He's got a high ceiling, but also could fail to ever develop (Marcus Randall). His lack of natural size limits his next level potential. I'll say his low end is as a quality reserve/package specialist.

Realistic: If all goes well, I expect Randall may redshirt this season (though factor heavily into game planning). By 2014, this could be your starting QB (or even 2013 depending on how well things turn out with Mettenberger). I look for him to be a 2-year starter, and a likely successful player.