Follow recruiting long enough and you're bound to hear all about how [insert recruiting service here] never gives [insert school/state/city here] enough credit/attention/admiration/praise/ranking clout. It's a time-honored tradition in the recruiting game to bitch about how this player and that player and this player (all commits to your school, obviously) are underrated. Reality usually lies somewhere in between. That's a discussion for a different place and a different time. 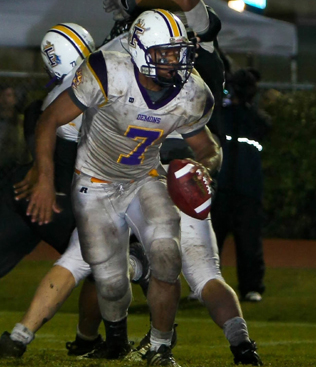 The transition from QB to RB is apparently going quite seamlessly.


Rankings don't usually upset me... at all, really. The players are the players, who cares how many stars they have after their names? I felt much the same about Terrance Magee, though I do believe the scouting services underestimated his abilities. Alas, playing out of position, for a small town in Louisiana and being a bit undersized, probably isn't the best way to garner national recruiting attention, yet there's an outside chance Mr. Magee could become the best skill position player from this recruiting class. More after the jump.

The first time I turned on the film, Magee reminded me of one particular player right off the bat. This player was also a QB in HS. He also came to L.S.U. He also transitioned to RB. He was also courted a bit by Major League Baseball. He's got a shorter, stockier build. He lacks elite speed. Yep, it's our current starting RB, Spencer Ware. Let me be clear, I do believe Ware is notch above Magee as an athlete. He has a unique explosiveness that very few possess (his ability to do a standing back flick at 230 shows this). But still, the similarities are there.

Magee is a humble kid with a good upbringing. He quarterbacked Franklinton HS with great success, including State Runner-up in 2009 and State Champs in 2010, their first trips to the game in 30 years. Though I've never spoken to him personally, all reports suggest he was the heart and soul of the team... the consummate leader and teammate. In other words, all the intangibles are there.

Physically, Magee is well put together. He's currently listed at 5'9, 212 pounds, impressive size for a true freshman who looks to be in good shape. I'm always a fan of RBs with shorter, compact builds to be able to sneak through holes. He's got the body to take a beating. On tape, he looks to have very solid quicks/explosion and very good vision. Obviously scrambling around as a QB is a bit different than reading the backs of lineman and sneaking through holes. However, there was a strong downhill, designed running attack featured into the Franklinton attack, so he does have some experience playing like a running back.

His thick lower-body leg build allows him to run with good toughness and power. There's a lot to like about the low to the ground, power-styled running back, much like a Mark Ingram. Magee does show the short-area quickness which is usually much more important to a RBs success, but he lacks long speed. He's feet are quick and don't look rooted in mud when runs. He's also decisive, which is something I love to see. Don't waste time dancing around... put your foot in the ground and get up field.

Early returns from Miles suggest Magee will be involved in the offense as early as this year. Day in and day out he impressed in camp, essentially playing his way right onto the field. That prompted a certain sportswriter from "Gannett" to promote Magee as the no. 2 RB on the team. That won't happen, but I wouldn't be surprised to see his role expand as the season endures, much like Spencer Ware last season.

High end:  I think he will vie for All-SEC and perhaps even All-American honors by his senior season.

Realistic: He'll be our starting tailback for two solid seasons, much like a Charles Scott.