Share All sharing options for: The Great Media: R.E.M.'s Green

OK, I've been a blogger.  Real life sometimes intrudes, and now that I have the time, I'm not going to write about the upcoming LSU game.  Sorry about that.  Y'all are a captive audience and PodKatt left town.  Maybe Billy will actually write about the game.

No, like every other Gen-Xer, I'm mourning the loss of R.E.M.  Back in the day, Richard had a feature called The Great Media, which I'm bringing back for the day.  Now, I know I'm supposed to say the my favorite R.E.M. album is one of the first ones.  And I do love Murmur and Reckoning, which was standard issue to all members of my generation.  But I'm going to go off the reservation, and praise the oft-overlooked Green. 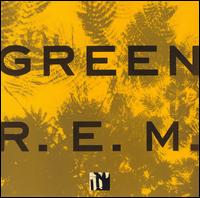 Up to this point, indie rock bands had a pretty checkered history with the major labels.  The Replacements quickly degenerated after leaving indie-land, though that was perhaps inevitable.  Husker Du also quickly folded after going "mainstream".  Sonic Youth got a major label deal mainly to attract other bands, and were quietly ignored by radio.  There simply wasn't a track record of independent bands going to a major and being artistically and commercially successful.  Anyone who went to the majors was eyed warily by scenesters, and risked the inevitable charge of sell-out.

R.E.M. decided to chart a course that has quite literally, set the standard for how independent bands make the transition with dignity.  Green was that first step.  Instead of cashing a large check and doing a watered down version of Life's Rich Pageant, R.E.M. arguably put out the most ambitious album of their career.


A lot of touches which would become R.E.M. staples in their most commercially successful period made their debut on the album.  For the first time, the vocals were brought to the front of the mix, so you could actually understand Michael Stipe's singing, even if the words still didn't make sense.  Mike Mills added piano to his work on the bass.  Stipe would use effects like singing with a bullhorn.  And, of course, Peter Buck debuted the mandolin on "You Are the Everything".

I do believe people would think back more fondly on the album had "Stand" not become such ubiquitous single.  It's a decent song, though probably the weakest track on the album, and it slyly veers into political territory with the line, "Think about the place that you live, wonder why you haven't before."  R.E.M. had never been the most political of bands, yet they decided to start right when a big company gave them a bigger microphone.

Green has some incredibly sharp power-pop songs ("Orange Crush", "Pop Song 89", "Turn You Inside-Out") but the albums most memorable tracks are the slower, introspective works.  I remember, as a kid, listening to "I Remember California" over and over again, trying to parse meaning from the song.  Or staring at the lyrics to "World Leader Pretend".

I was 13 when Green came out, and it was quite unlike any album I had ever heard before.  Like many people my age, R.E.M. was my first exposure to music "left of the dial".  In an era of synth pop and hair metal, R.E.M. was the gateway drug to all of the music and art that didn't get past the gatekeepers of pop culture.

This was pre-internet.  If you didn't know someone, or have an older brother, you simply didn't find out about bands that didn't get played on the radio.  Now, you just go to Spotify or Pandora, and you get exposed to all sorts of things.  It used to be a lot harder. I don't think it was better, or that we were better for having to go on wild goose chases to find out about stuff, it's just the way it was.

R.E.M. was the band that opened up the door to the "Alternative Nation."  It is quite literally impossible to overrate their impact.  By the time of their next album's release, R.E.M. were already the respected elder statesmen of alt-rock, championed the new wave of bands like Nirvana.

Richard and I were talking once about the early 90s music scene, and he claimed that it was such a remarkable time because it was one of the few times in music history that the most commercially successful music was also the most artistically ambitious.  That rarely happens.  The reason it happened then is largely due to R.E.M.  They are the fathers of the Alternative Rock boom.

He also asked me on facebook if there was another 1980s band who has cast a larger shadow.  Frankly, I can't think of an American band from any era who does (Creedence Clearwater Revival comes close, but has a really short career).  They wrote the rulebook, and they can retire as true legends.  Green is the album that brought them to the mainstream or more accurately, brought the mainstream to them.