Thoughts From The South Endzone: West Virginia, Wild and Wonderful

Share All sharing options for: Thoughts From The South Endzone: West Virginia, Wild and Wonderful 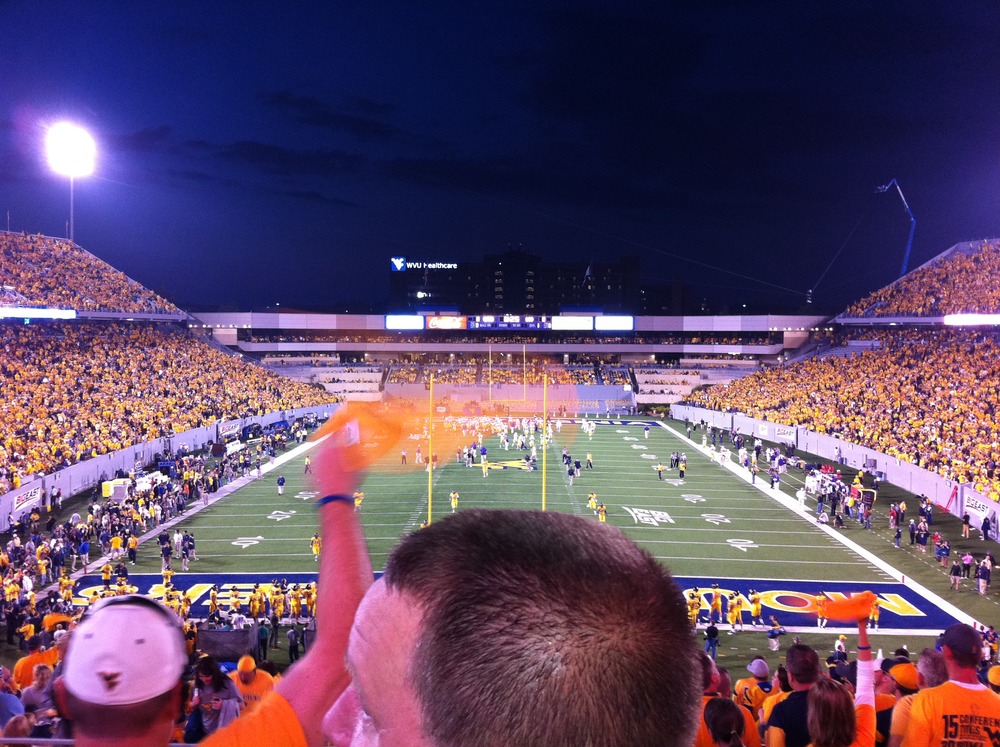 This was a trip I had been looking forward to for nearly 2 years since the home and home was announced. It seemed like such an odd matchup at the time, a rarity that might never be repeated. How could two of the most rowdy fan bases in the country even co-exist long enough for a game to take place, let alone the day-long tailgates such games deserved and received from the TV planners. As it turns out, they mix just fine.

There's no getting around it. Driving to Morgantown from Louisiana was one of those great once-in-a-lifetime experiences, but it's not a feat I'm looking to ever repeat. For those road warriors out there, you're basically driving to Lexington, Ky and then driving another 6+ hours on some of the steepest graded interstate there is on the east side of the Mississippi. Add in some moderately wet roads (though thankfully none of the heavy rain that I've been told those who came from Pittsburgh experienced) and a handful of Mountaineer drivers who made their presence known and the final hours were a bit of an adventure.

Not to say it wasn't an enjoyable trip otherwise. West Virginia has some beautiful scenery (which many locals said would look even better when the leaves turn in a few weeks), and every once in a while we'd pull over the crest of a hill and see a gorgeous vista that went on as far as the eye could see. But then it was eyes back on the road, lest we run off into a ravine. I would recommend the journey to anyone, but only once due to the sheer time it takes to complete. Should WVU make it to the SEC one day, future trips for me are definitely going to be flights.

I'm sorry to report that I can't give a review of the Morgantown bar scene. The path the to our hotel did takes us right through the much vaunted "High Street" area, which looked to be a great college bar scene (Personal favorite: "The Rusted Musket" which looked just as shady as it sounds.) Once checked in, we hoofed it to a local place called Al's Pizza, and were met with a few rowdy youths who, after we declined their invitation to buy 40's for them, gave us the first of many expletives of the weekend. Al makes a decent pie, but it wasn't anything to write home about.

Being too burnt out from the drive, I basically collapsed in the hotel room and got up early the next morning to head for the "Purple Lot" for some paid entry, on-campus Tailgating. I stopped at a Sheetz gas station (a chain which is as big in WV as Shop Rite is in Louisiana) for some ice and to wait for a few fellow tailgaters to arrive. While icing my beer, an ambulance pulls up in the spot next to me and the drivers head inside for some coffee. On the way out, one of them notices my LSU tags and proclaims loudly to his buddy "Can you believe the balls on this guy? HEY! Fuck You LSU!" They then had a chuckle and left. 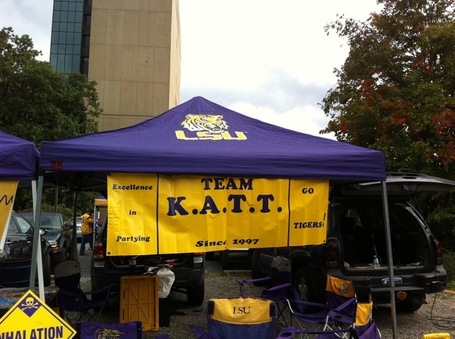 The "Purple Lot" ended up being a series of gravel spaces at various points up a hill. A few WVU fans were near us, but I was at first disappointed at the turn out. Things settled, I began plotting a way to get to the Gameday set on the downtown campus a few miles away. At this point I was informed that something called a "PRT" was free for anyone to use on gamedays. 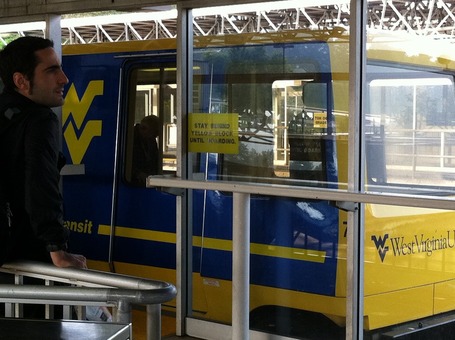 Oh, what an amazing bit of early 80's technology do we have here. At first glance, the PRT brought back fond memories of the monorail at Disney from my childhood (though it's actually a system of self-propelled cars that run on tires). I got on expecting a sedate ride and nearly fell on my ass as it kickstarted into gear. The best way to describe it is an air conditioned mine cart ride, complete with certain sections looking a little more rusted than you'd think, higher speeds that border on the good kind of crazy, and a few banks that make you glad the car is sunken into the track. In short, it's awesome and I'll be petitioning LSU to create a similar system within the week. 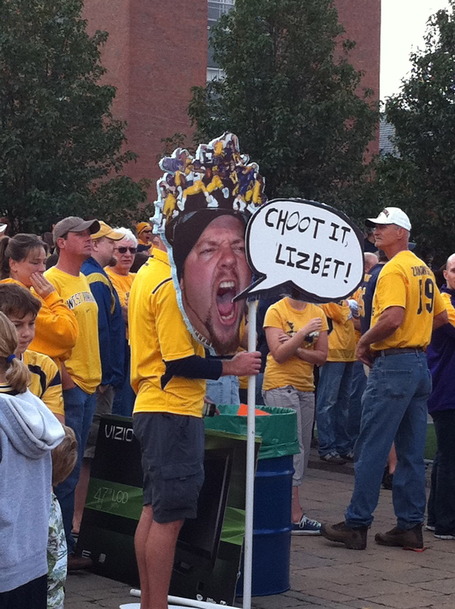 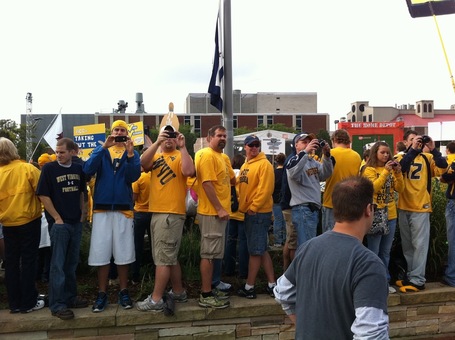 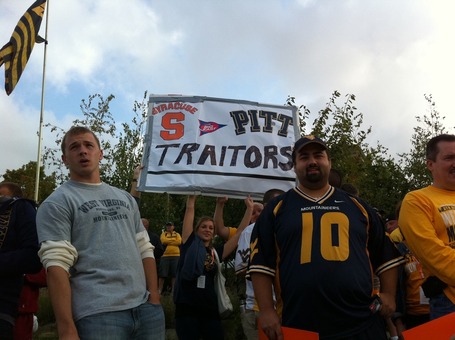 The Gameday set/ Student Union area was packed and must have looked great on TV with all of the fraternities going up the hill. The crowd was a bit hostile towards me and other LSU fans walking around, but nothing out of hand. There were a few great signs, and it generally seemed like they were more pleased that the gameday circus had finally made it to their citaaay than anything else. Had Chic-Fil-A breakfast in their union and hopped the PRT back to the Hospital hill to check up on my own tailgate. 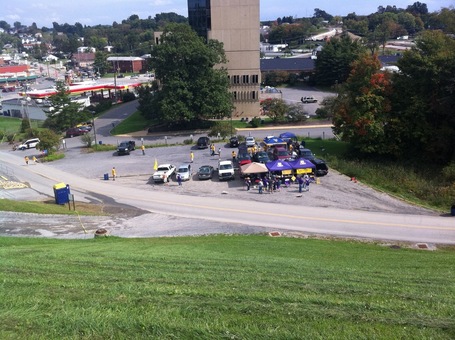 It should be said at this point that worst part of the trip for me was the fact that giant hills separate everything in Morgantown, with either a steep road or a hellacious set of stairs separating the various elevations. Hitting a Stairmaster in preparation is a very good idea. Once I got back down there with a few new LSU friends in tow, I had a pastalaya lunch and some great conversations with the locals before heading off to find Spencer Hall and a few other SB Nation folks who were on the scene. At this point, I was still disappointed in the lack of tailgating I had seen. This ended once I crested back over the Hospital hill and saw the vast expanse of the Blue Lot. 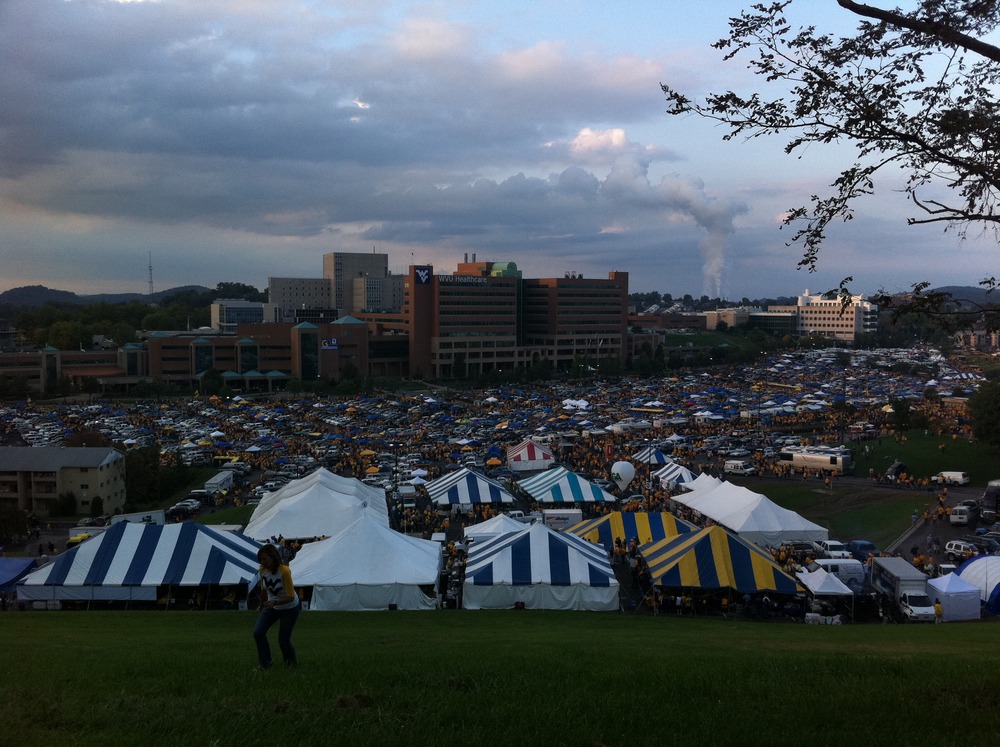 Row after row after row of tailgates tightly packed and stretching as far as they can, a vastness I could only truly appreciate from space the top of the Law Hill later that day. At LSU we have a larger amount of tailgating, to be sure, but it's so spread out over the square miles of campus that it's hard to appreciate the scale. At WVU it appears that nearly everyone is compacted into this and a few ancillary lots right next to the stadium. It was impressive and more than I was expecting. The fare on offer wasn't spectacular, with a very brats and burgers heavy spread at nearly every tailgate, but the same love of large amounts of beer you find at LSU was there, with several odd home-made contraptions to ease along the vast amount of consumption, just like you'd find in Baton Rouge.

The day gets a little hazier at this point. To catch the Bama-Ark game, the SB Nation crew took a fair hike to a place called Kegler's, a 3 story bar/bowling alley which LSU fans had commandeered an entire floor of for the day. I ran into what must have been a group from Walk-On's (judging by the huge roll of stickers they were passing out) and was introduced to Tommy Hodson. After meeting a few other new-media types (and being recognized by a few of you readers) we at some point made the trek back to the Blue Lot and headed up the painful stairway to the top of Law Hill. At some point in the Blue Lot I passed a big LSU tailgate with a big LA energy company flag flying atop it. I will be supremely jealous if they found a way to expense this trip. 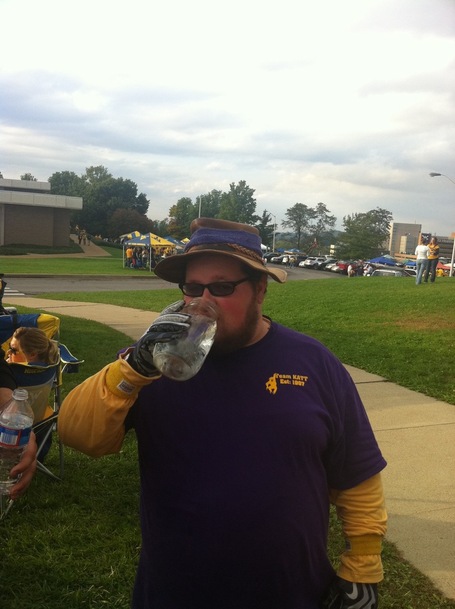 Once on top of Law Hill, and swearing there would be no more uphill trekking until after the game, I ended up at a tailgate where a friendly mountain man offered us a jar labeled Red Corn that contained an unknown clear substance. It smelled like a strong paint thinner and tasted like nothing, but the fire it lit in my chest was nearly incomparable. And it's a burning that sticks with you for a while, and that wiped out the rest of the afternoon from my memory. At some point, we made our way to the stadium in time for the pregame festivities. 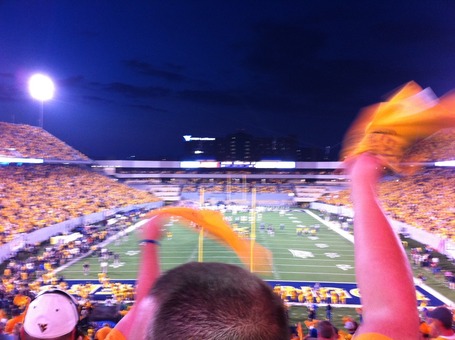 The Pride of West Virginia would easily rank as a mid-level SEC group, but it's not without fault. Namely that their pregame show lasts nearly 30 minutes and was in fact longer than their halftime show. I get that these things are all about tradition, and the state of West Virginia formation remains one of the classics of college bands, but it could do with a trim. An odd conflict that I noticed last year is that they prefer to play on nearly every defensive down, while LSU prefers to play on offense, leading to a lot of overlap and silence during the game. For their part, TGBFTL brought a smaller compliment than I expected, but owned the place once the game got out of hand in the 4th. Neck remains in heavy rotation on the road, and for that I am happy.

WVU had gone full out on the power towel thing and the home crowd had nearly completely bought into the "gold-out" theme. The crowd was loud and on their feet for much of the game, something which I gathered from the "Season Ticket Holder" incident was not the norm. A few WVU fans remarked to me during and after the game that it was an atmosphere they hadn't seen that pumped up in years. I was genuinely impressed with the rambunctiousness of the small-by-SEC standards but nonetheless packed house. While the crowd did get deflated on Mo Claiborne's run back, the stadium didn't really empty until the game got far out of hand in the 4th and more than a few of them truly believed at halftime that they could get right back into it. My only complaint with the stadium experience would be the over reliance on piped in music and the use of the video board to get the crowd pumped up. It was at NBA levels of over use and would be nearly embarrassing in this league.

Overall, I'd grade the entire atmosphere in Morgantown very highly. There were a few assholes, as there are in every fanbase, but the feared level of animosity we were warned about never materialized. I found the people of West Virginia to be very welcoming and friendly, with a chant of "Eat Shit Pitt" being able to smooth over most rough edges. It is, in my opinion, an SEC atmosphere that deserves a far better home than the Big East currently provides them (when the highlight of your remaining home slate is UL and a grudge match with Pitt, there is room for vast improvement).

Thanks go out to Steven Godfrey and his lovely LA-native wife who showed me great hospitality in Nashville, To The Smoking Musket crew who provided the moonshine and can roast a pig with the best of them, and To Spencer, Luke, and former SBN'er Holly who provided great company before and during the game.

/Side Note. Post game traffic: Worse than BR by a VERY large margin.