Inside LSU Football for September 4th, 2011

REMINDERS: It's a busy, condensed week here and on campus after Labor Day. Miles' weekly press conference lunch is this afternoon, the Shaq statue unveiling is set for Thursday evening, Soccer's home opener in their new park is Friday night, and we all get our first taste of the new parking regulations this weekend. Tickets to the game against Northwestern State are still available for sale, though if you've been to one of LSU's weaker non-conf games in the last few years you know that it'll be a buyer's market with the scalpers.

This weekend is also the annual TigerVision game and all residents within the state lines must plunk down the $34.50 for pay-per-view. You may have seen that ESPN3 logo next to this game on the schedule card that was put up near the end of the Oregon game broadcast, but don't get your hopes up as it will also be blacked out within the state. I would also suggest Out-of-State residents who wish to view the game online ignore LSU's recommendation of a Geaux Zone purchase and check first to see if the free ESPN3 service is available from your internet provider.

And Yea did the world begin to believe in the Tigers. The national press couldn't stop itself from praising The Hatted One this weekend, from Yahoo, to College Football News, to Sports Illustrated, to the good doctor, to the New York Freakin' Times.

(Note: A few of the articles above mention Miles having a "creative" way to spell our beloved GEAUX. While no footage of the press conference currently available confirms this, I have a source who is working quickly to provide video evidence of this latest entry into the Cult of Les.)

Duck fans have taken the loss well, crediting LSU's talent while recognizing that they were their own worst enemy at some key points in the game. Oregon's loss was but one of many as the Pac-12 stumbled out of the gate in non-conference play. Newish SB Nation Pac-12 blog Pacific Takes chronicled the horrors from both the Cowboy's Classic and the rest of their league's games in some great farks, including this poster worthy number. 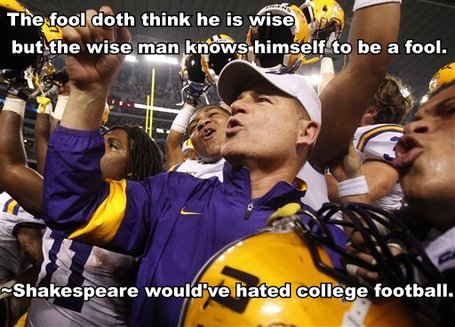 (Let me take a minute here to give a big shoutout to the Duck fans who've shown up in the comments around here and those I've seen at Addicted To Quack over the last few days. You've been a classy bunch and we hope y'all come back and visit sometime.)

Not that the SEC didn't have it's own problems on the opening weekend. There were some impressive performances and embarrassing performances against a lot of supposedly weaker competition, and one special performance that may get someone fired in week 2. Jarrett Lee's performance compared to the rest of the conference ends up in the expected spot for LSU QBs in the last few years: below Vandy and among the losers and backups. (Which is enough for Finney at the Times-Pic to argue for Jefferson's return) Meanwhile, Tyrann Mathieu's play was stellar enough to earn him SEC Defensive player for the week.

The Times-Pic has a roundup of all of the late-offseason moves for Tigers in the NFL, including news that Pep Levingston was dropped by Seattle.

Some of you may have missed it in the flurry of the weekend, but LSU's Pro Combat Uni's for the Auburn game this year may have been spotted in the Nike Store in Vegas. LSU won't confirm them, but I highly doubt these pictures could be of anything else.

Odd tale from this weekend: SEC Head of Officiating Steve Shaw was supposed to spend the weekend at the Command Post in the league office in Birmingham, but instead got called into service at the Florida-FAU game.

While the main plot of As The Aggie Turns has not progressed at all since last week, the other members of the BX have seen the writing on the wall and have been vocal about their desires to move west to the PAC, with Okie St billionaire booster T Boone Pickens being the most vocal. We've also heard that the Big East has contacted those likely left behind about joining up.

Spencer Ware with Jordy from CST