LSU vs. Northwestern State: What to Watch For

Share All sharing options for: LSU vs. Northwestern State: What to Watch For

LSU faces a I-AA (FCS, FCC, FIG -- however the NCAA spells cupcake these days) opponent this week in Northwestern State. At least the cupcake comes from a local bakery.

Last week was one of the top ten wins of the Les Miles era, but it's still one, and there's a lot more that we all want to see this year. And with a pair of tough road games coming the next two weeks, the Demons are this week's lab rats. LSU needs to use them to refine its own product. Nothing more, nothing less.

Where that begins should be obvious -- the passing game.

Ninety-eight yards passing and a sub-50 completion percentage will simply not cut it against the meat of LSU's schedule. I don't expect all of the necessary improvement this week, but Jarrett Lee and the receivers are going to get much easier looks this week than they will against Mississippi State's talented secondary next week.

We'll start on the distribution end of the process, the quarterback. And for Jarrett Lee, that starts with simply relaxing. This isn't his first start. This isn't the Jerradome. This is Tiger Stadium, against a defense that won't have much of a chance of covering your receivers. Most importantly, you aren't an overmatched freshman anymore. You're a fifth-year senior firmly entrenched in the starting job (while it would be very nice to see Zach Mettenberger play this week, it'll happen in garbage time or not at all). Those walls aren't closing in on you, and your shoulder pads aren't trying to strangle you. Just play.

There's been a lot of debate around the LSU-interwebz regarding the quality of Lee's performance. Frankly, I've never seen so many message-board posters lining up to fellate a quarterback, just because he passed for 98 yards. Seriously folks. Lee completed 45-percent of his passes last week, and the Humanoids are praising this as some sort of stellar performance (I notice that the same people doing this tend to be the ones that spend most of their time on the internet bitching about Jordan Jefferson or hoping he gets sent to Angola, but that's a whole other big-ass can of worms). Sure, there were some drops (more on that in a minute). But there were also a few bad decisions and bad throws mixed in there as well. The cardinal sin -- really the biggest mistake Lee made last Saturday -- was a handful of miss-timed throws over the middle of the field. That's one thing to focus on this week.

A big reason that going across the middle of the field is so dangerous for a receiver is that a lot of what happens is not up to them. The path of the throw is very often what determines whether they get jacked up by a safety or a linebacker and whether the ball goes up for grabs, and that is why timing and ball-placement are so important. Lee's was lacking, whether it was on the short completion to Jarvis Landry (late, led Landry right into an Oregon linebacker), or the incompletions to DeAngelo Peterson and Chase Clement (two poor throws, one of which was tipped up and nearly intercepted). I can accept that Lee's footwork, particularly his predilection towards throwing flat-footed or off his back foot, are what they are at this point, and aren't likely to change. He did complete a respectable 60-percent of his passes on third downs last week (on 10 throws), a number that can be built upon. Of course, only half of those six third-down completions actually converted the first, but baby steps here, folks. Improving on timing is a much more attainable goal this week. Ideally, Lee will get that completion percentage up around 60-percent with a yards per attempt at least north of six, while keeping the interceptions at zero. But I've come to keep my expectations low the last few years at quarterback.

On the receiving end, the answer starts easy enough: catch the football. Drops are going to happen. Hell, some of what people are counting as drops from last week, I would consider more well-defended passes than anything (the endzone throw to Odell Beckham and the deep jump-ball to Kadron Boone come to mind). Both passes were "catchable" nominally, but it's pretty damn tough to snag a jump ball with a defensive back's hands in between yours.

Beyond that, it's important for this young receiver corps to simply settle into their roles. Rueben Randle will probably be hobbled for a little while with this mysterious ankle/knee injury that's been rumored about, so that means it's on ODB, Boone, Landry, James Wright and the tight ends to make some things happen this week. They should be in position to make some nice plays, and need to just focus on doing what they've been taught. Last week's game looked a little big early for the young guys like ODB and Boone, but that won't be the case this week. The passing game doesn't have to be incredibly productive, just efficient.

This week's gameplan probably won't differ very much from last week, but I'd love to see the team come out and complete a couple of lay-up throws early. Lee is a streak passer (much like Jordan Jefferson) and if he could string together a couple of easy throws early, such as those bubble-screen plays to ODB (yes this is the nickname I am using for him) or those quick slant throws to the tight ends, he'll have a little more confidence on those deep throws. Keep an eye on Peterson in particular. If he can string together two straight very nice games, that would be a very good sign for the Tigers going forward. 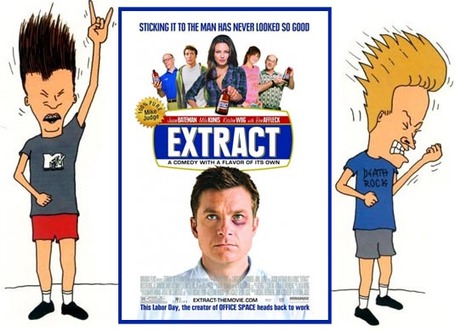 Guess who returns to TV this fall? By the way, did you know MTV was still around?

Like I said, expect this week's gameplan to be very similar to last week's. A lot of running, a little bit of passing, maybe a little more if it's working early, but nothing exotic. It would be nice to see LSU try a few things out in a game situation while the opponent isn't much of a threat, but history suggests this isn't likely.   The key is in the execution. If the two lines bring last week's effort, those big holes are only going to be bigger. The big thing to watch for is growth and continuity. Is Peterson as enthusiastic in run-blocking again? Does Michael Ford run hard and decisively like last week? Do the ball-security issues P.J. Lonergan and Spencer Ware had last week go away?

LSU's not going to come out and show anything special to try and exorcise the Demons especially quickly, but if the execution stays clean, that should be enough to hopefully make this game look like the lay-up it should be and get some more time for the backups/young players in the second half. It should be a priority to get Mettenberger in at some point, just to give the sophomore some live action before LSU sees an SEC defense. Other players that can use the reps include Alfred Blue, Jakhari Gore, Tyler Edwards, La'El Collins, Freak Johnson and Ego Ferguson.

Defensively, expect LSU to try and keep things as bland as possible, with a lot of simple coverages. If anything, it would be nice to see the outfit pad some stats a little in terms of sacks and tackles-for-loss. The defensive line spent a lot of downs in contain mode, trying mostly to keep a net up around Darron Thomas while also creating lanes for blitzing teammates. There will still be the odd blitz or two, but look for the defensive linemen to be a lot more active in the pass-rush as well. Although it would be really nice to keep this whole scoreless streak NSU has against the LSU going.

It's generally never been Les Miles' MO to try and embarrass cupcake opponents, and that's certainly not going to change with former assistant Bradley Dale Peveto on the other sidelines. There probably isn't going to be much to take from this game. Hell, the 2010 Tigers averaged nearly 100 yards more per game in SEC competition than it put up on McNeese State last season. Efficiency should be the Tigers' goal in week two. If the Tigers show some proficiency in execution, and get out of this week with a W and no injuries, the mission will be accomplished.