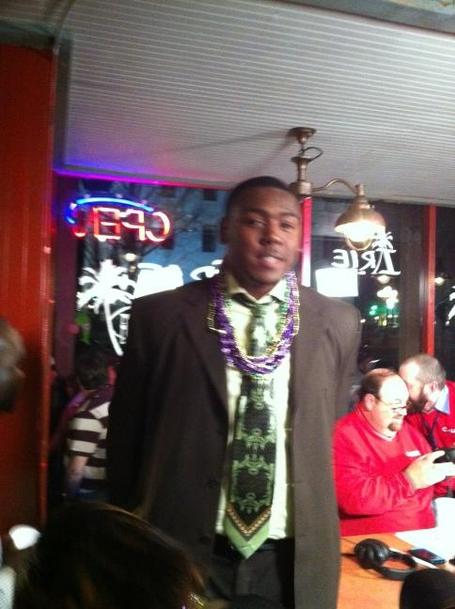 Image from Liggins commitment announcement in the heart of Oxford, MS, via SBN Atlanta's Steven Godfrey

My thoughts on him remain the same: I'm happy to have Liggins on board, but I'd be shocked if QB is in his future at LSU. His arm, while under-developed, doesn't appear to have a ton of natural ability. He's a bit of a soft-tosser... think Chris Relf. That being said, the quality of the highlight tapes, combined with the lack of passing attempts doesn't give a great source of evaluation. He does show good touch, and his throwing motion is compact. Could he be a QB at the D1 level? I think so. But he needs to be in a spread-option based offense, and I'm not sure Miles is willing to make a transition to that fully.

Now, Liggins does have a tremendous reputation for being a "field general" and a leader. That being said, from the tape I see a kid who is a naturally gifted runner and I'll never, ever oppose LSU stocking up on big athletes that can run. Liggins' future could be at TE or even on the DL. If he does play QB, frankly, I'll be surprised, but the nice thing is he has the ability to be used in many places on the field.

At worst, Liggins gives LSU another body at QB. At best, he's another big athlete that we can find a spot for. He claims he prefers to play QB (that's all he's ever played), but that he'd do whatever it takes to help the team. Saying that and following through on it are often different things. It appears Brick Haley was given the lead on recruiting Liggins, which could speak to where they expect him to wind up. Or, it could mean nothing.

In short, Liggins is a nice get for LSU.