Share All sharing options for: Let's talk about Corey Thompson

On January 5th, Landon Collins committed to Alabama. LSU fans were aghast, particularly after receiving positive signals directly from the Collins camp. Safety was one area of need for the 2012 recruiting class and it seems Ron Cooper has found his men in Jerqwinick Sandolph and now, Corey Thompson.

Thompson, a long time Texas A&M commit (welcome to the SEC, boys), hails from Missouri City, Texas. Of the four major recruiting services, Rivals, Scout, ESPN and 247, the vote is split: Rivals and ESPN rate him a 3-star, while Scout and 247 rate him as a 4-star. Further, Scout is the only site of the four which lists Thompson as a LB. So where does he project? And what type of player is he? More after the jump...

I had a feeling Thompson would wind up picking LSU. After I stumbled upon his twitter, I noticed he tweeted back and forth with multiple players on the team, re-tweeted Lamar Louis, and even posted a couple of favorable tweets about the state of Louisiana. The writing was on the wall, at that point. The shocker was that it went down last night, seemingly out of the blue.

First things first: Corey is a smart kid. He's stated, repeatedly, that it's important to him to get an Engineering Degree. With all due respect to most collegiate athletes, Engineering isn't generally a favorite topic. For me, it's always a plus when a student-athlete actually expresses some academic aspirations. It speaks not just to their intelligence, but their character. That sort of intelligence could lead to Thompson seeing the field early. The question is, where?

The first question will be his speed. Rivals lists an unverified 4.56 40 for him. The other three sites all list him as 4.66. This is certainly with the range of safety speed. I'm assuming Thompson runs around a 4.6, but timed speed isn't everything. In fact, ESPN makes a note in their evaluation that he is "football fast" and to me, the tape backs that up:

Thompson flashes tremendous closing speed and he really packs a wallop when he hits. Let me be clear: this kid is violent. He throws himself around pretty recklessly. I really, really like the way he gets to the football.

All four sites seem unanimous in their opinion that he may be best employed at LB because of an apparent "weakness in coverage." While I admittedly have very little tape to work with (and it's all highlights rather than full game tape), I just don't see it. Thompson looks very fluid in his safety drops, to me. Further, he doesn't take "false steps" very often. To me, this is often a tell as to whether a player can play in the secondary or not. False steps are sometimes just bad habits, sometimes a player not trusting his eyes and sometimes an indicator of a player lacking instincts. Thompson doesn't really show that on tape. He's always moving toward the action of the play. The tape above shows him matched up on a jump ball, and flashes his leaping ability... after he runs stride for stride with the receiver in near perfect form. Other clips show him settling into zones, reading the QBs eyes and making great plays on the ball. To me, these are not the signs of someone who "struggles in coverage."

For LSU fans, the most immediate guys that come to mind are Harry Coleman and Karnell Hatcher. Both were Safety/LB tweeners who struggled in coverage but could hit. Coleman turned himself into a fine LB his final year at LSU while Hatcher never really materialized. On tape, Thompson has better coverage skills out the box, and this before Ron Cooper has even gotten his hands on him. Size wise, he's got a leaner build: 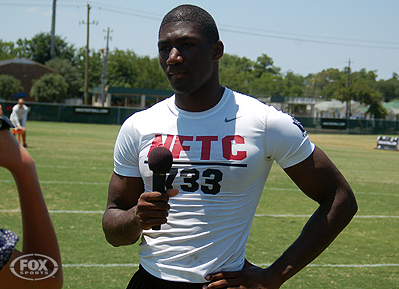 Obviously he will add muscle to that frame, but he's thin at the waist and his legs are skinny as well. To me, he looks like a safety, not a LB. Of course, so does Tahj Jones.

Thompson may not run a 4.4, but the tape shows he plays that fast and that's all we should really care about anyhow. He's physical (mean, even) and instinctive. He shows natural coverage ability. He's smart. He's essentially everything you'd want out of a safety. The recruiting services may project him best at LB (and admittedly, they've likely seen more tape than I have, as well as done some in-person evaluations), but I see him as a safety all the way. Not just because of what I see on tape, either. But also because LSU is already chocked full of LB commits (with the potential of even adding another) and has an implicit need at S.

Corey Thompson may not be Landon Collins, but he's a damn good consolation prize.