ATVSQBPI and Why West Virginia is Going to Lose

Geno Smith is great. Like Heisman great. Now take the exact inverse of that, and you have WVU's defense.

Share All sharing options for: ATVSQBPI and Why West Virginia is Going to Lose

We took a week off from the ATVSQBPI ratings because, well, Week 5 was pretty boring and I had nothing interesting to say. Pretty much everything stayed the same. But Week 6 brought the big games, and big games mean we get a better picture of some players. Hey, it matters more how you play on the biggest stage. No one wins the Heisman by beating Directional State. 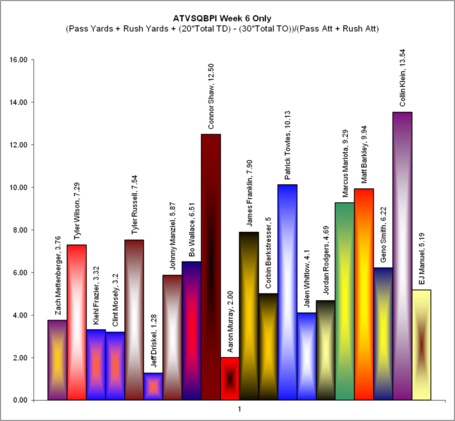 It's shocking to see Geno Smith have such a low Week 6 number, considering that WVU was in yet another big shootout. Part of the shock of West Virginia's win was not how terrible Texas' defense looked, but that it got gashed by a running game not by the Heisman candidate quarterback. Geno's rating is hanging out down there with Johnny Football and Bo Wallace in their bizarre shootout. No rating is perfect, I guess.

Connor Shaw and Collin Klein did their best to break ATVSQBPI in pretty much the same way: running for a bunch of yards, having some big pass plays, and scoring a bunch of touchdowns. Though you really don't need a fancy metric to tell you USC and KSU both opened a can of ass whipping. At the other USC, Matt Barkley turned in a nice performance buoyed by 300 yards passing and only getting credit for one fumble on the two failed snaps.

But the biggest number here is that Jeff Driskel put up a 1.28... and won. OK, Zach Mettneberger didn't set the world on fire with a 3.76, but come on. Driskel passed for 61 yards, turned the ball over once, AND WON. That's just mind-boggling to me. 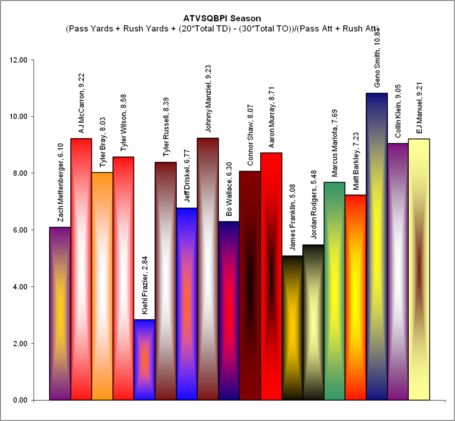 I'm getting ready to transition to Conference-Only stats, but give me another week. We're sticking with season overall numbers, which are a tad skewed with those tasty cupcakes. Still, Geno Smith is crushing the field right now. He's been awesome, and he's been racking up yards and points at an impressive rate.

AJ McCarron and Johnny Football are neck and neck for the SEC lead (McCarron leads in SEC only stats), but both get to their rating in divergent ways. McCarron is ruthlessly efficient, rarely making mistakes. Manziel has three turnovers, which is three more than McCarron, but he makes up ground with his gaudy touchdown totals and how he kills you with his legs. Manziel is the total package right now and might be the best quarterback in the SEC. And he's a freshman.

Though I'm not throwing up the SEC only chart yet, just trust me when I say not to trust Tyler Bray or Tyler Wilson's numbers. The Two Tylers have gotten fat on cupcakes and gotten pasted by the conference's defenses. 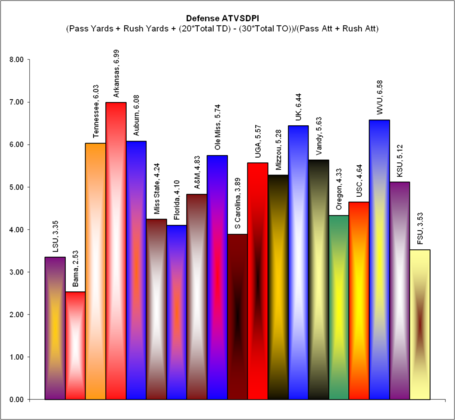 This brings us to defense. Now, this is where we need to be a bit clearer about the differences between ATVSQBPI and ATVSDPI. The formula is the same, but on offense it applied strictly to one player: the quarterback. The defensive version is not applied to the "opposing QB" by the entire opposing offense. Which means we are no longer rating "modified yards per attempt" like we are on offense. There, we look at every time a QB calls his own number. ATVSDPI looks at every single offensive snap. We are rating how a defense fares against the entire offense, not the quarterback or passing offense. We are rating modified yards per play.

This is an important thing to keep in mind because while a team might want to get around 7.0 yards per pass attempt, it is looking for closer to 5.0 yards per play. The scale is different, and what constitutes a good rating is slightly different, despite using the same formula. It's not the formula which has changed, but what set of data the formula is being applied to. ATVSQPBI: the quarterback. ATVSDPI: the entire offense. This must be kept in mind, and it explains why ATVSDPI is slightly lower.

I know I voted West Virginia first in the BlogPoll, but you want evidence it won't last? Their ATVSDPI is worse than Tennessee's, and in the same ballpark as Arkansas'. West Virginia's offense is awesome, but they are playing defense at a level that even Tennessee would find unacceptable. That is the very definition of unsustainable.