Photoblog from my seat at the game

Share All sharing options for: Thoughts From the South Endzone: South Carolina

As always, (unless otherwise stated) the photos and videos in the post were taken by me. You can see the full gallery HERE.

First off, the new team intro video, which I finally managed to remember to record 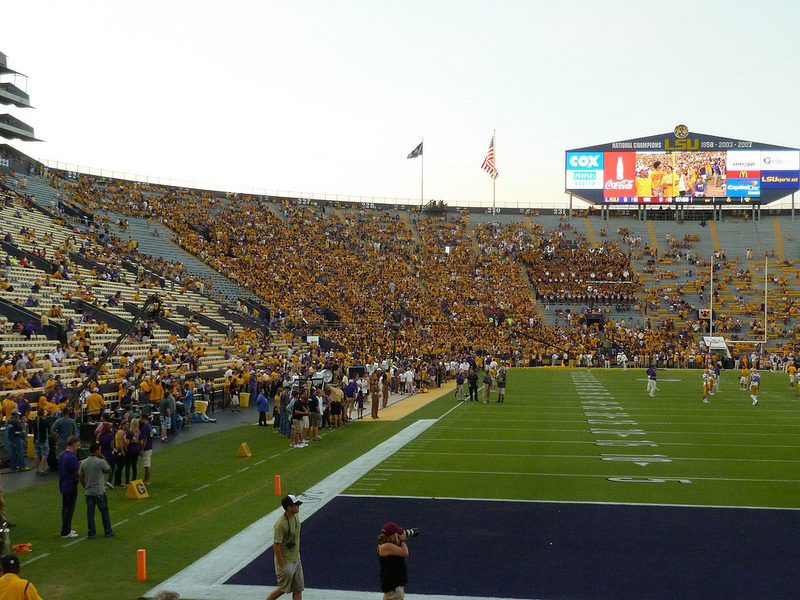 A lot of credit for the massive amount of crowd noise needs to go to the student section. The section was full to overflow well more than an hour before kickoff and they stayed standing and loud until after the final whistle. We give'em a lot of heat for their various nefarious activities, but the students brought it on saturday when we needed it the most. 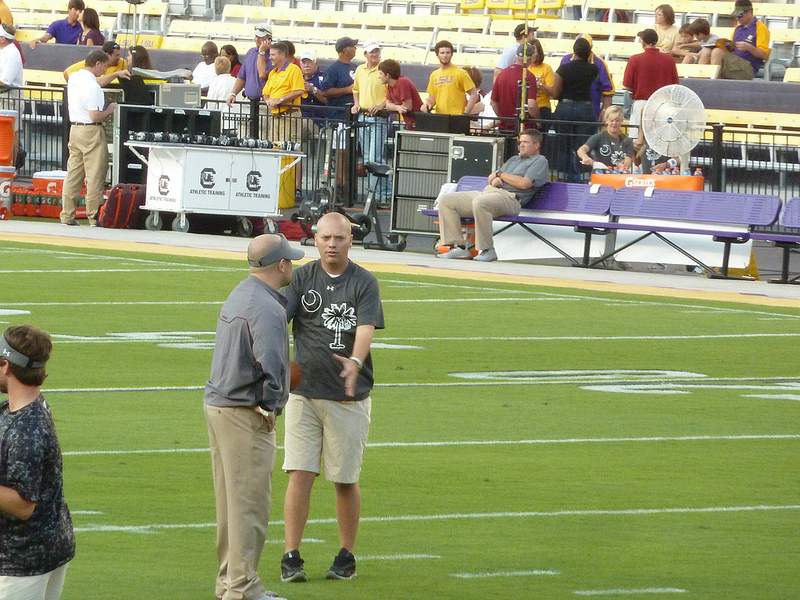 Yes, South Carolina's unis were terrible, but they had one decent piece of equipment. All the trainers had these Palmetto State flag t-shirts that looked great (for South Carolina gear, anyway) 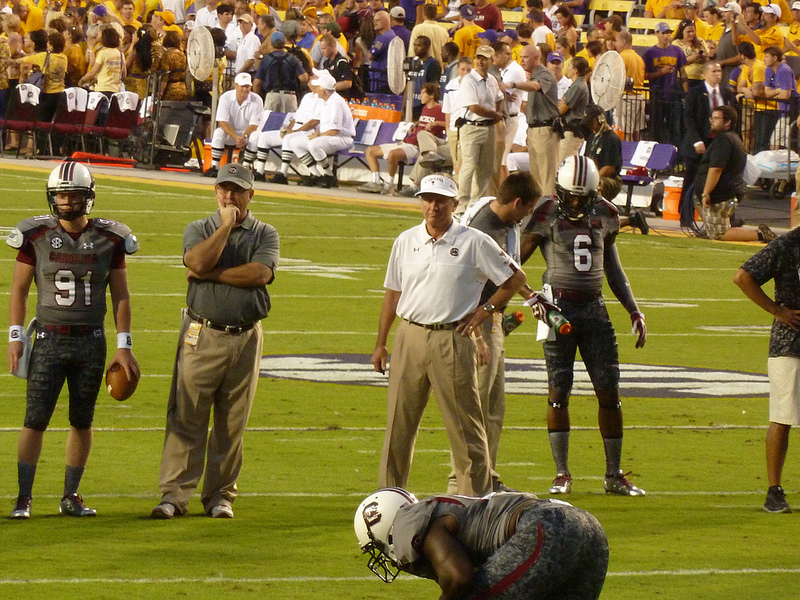 Was this the last time we'll see Spurrier in Death Valley? Probably, given the chaos about to hit the SEC East-West rotation. But what a last time. We got genuine vizor tosses and general freak outs that are the trademarks of the Ol' Ball Coach having a bad day. Interestingly I noted that USC used no sort of sign board or play calling device other than hand motions (that I saw) to relay plays from the sideline to the field. I imagine that might have contributed to their occasional issues getting plays off. 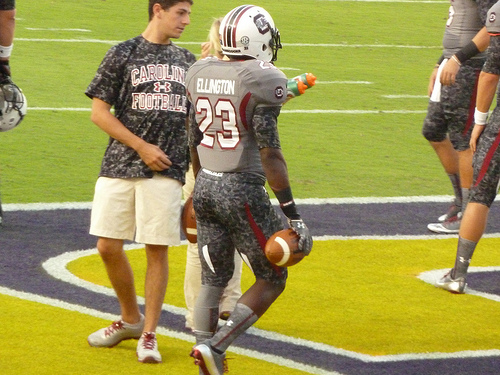 Just horrible. The only redeeming quality is that it was for a good cause. 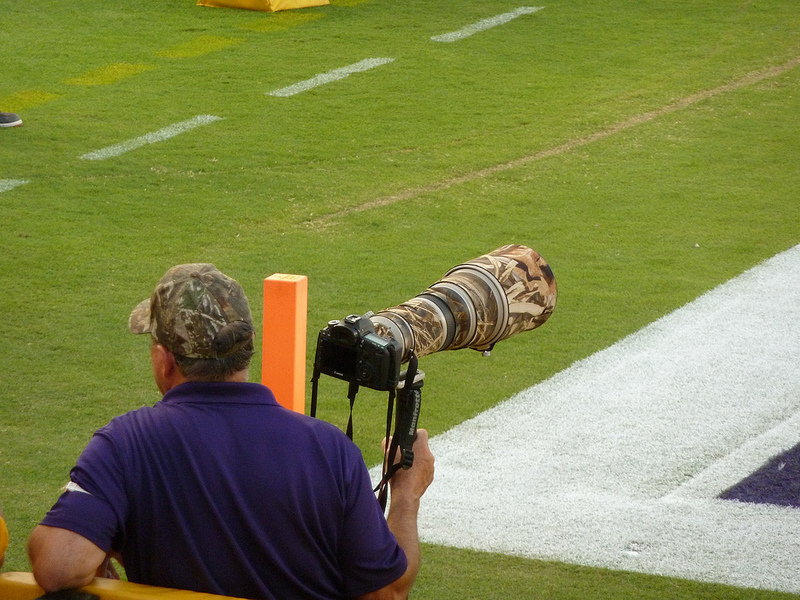 If LSU did camo unis, they'd probably look something like that. I've never seen a camera decked out in RealTree in Tiger Stadium before. 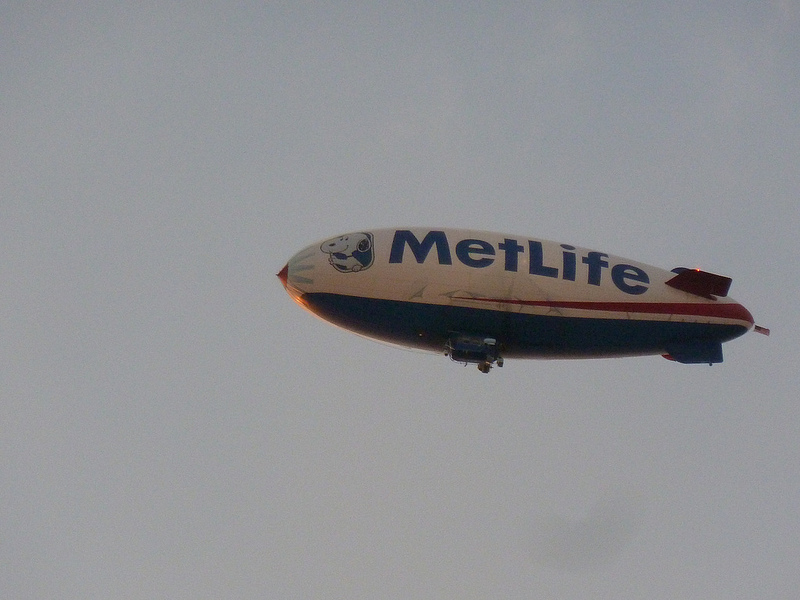 Real live blimp this week, not just some guy circling in a Cessna. It's down right creepy sometime when it just hangs, unmoving, in the air for the whole game. It got some fantastic shots for TV. 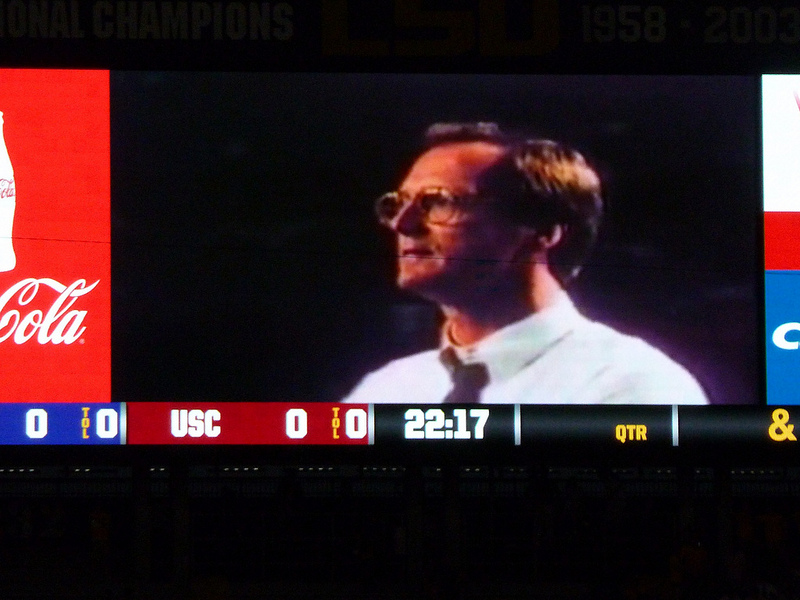 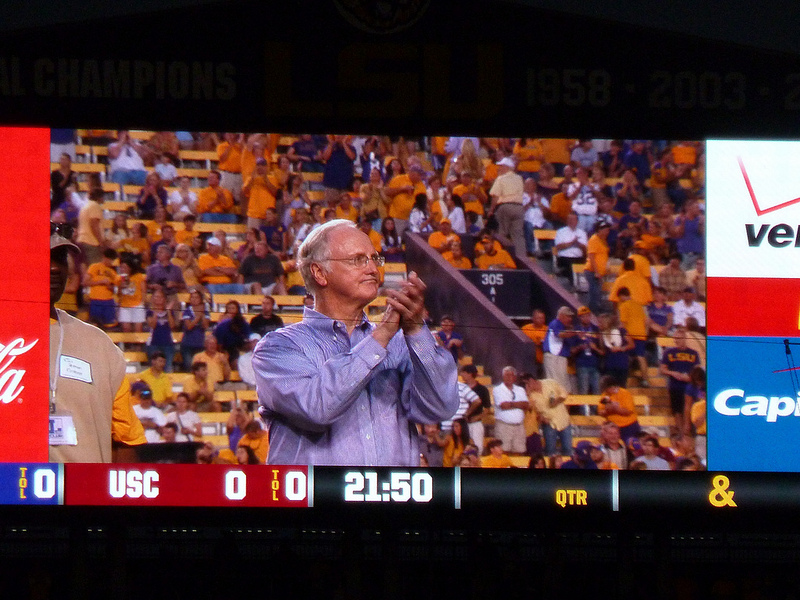 I swear, give Jerry Stovall some hair coloring and it looks like he hasn't aged a day. 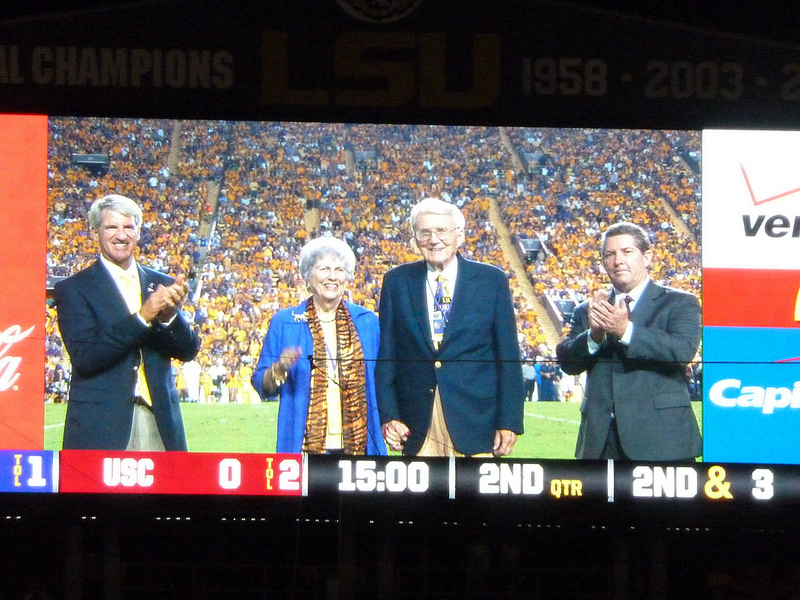 It was mostly cut off on TV, but Paul Dietzel was recognized for completing a rare feat. In addition to his work as Coach and AD at LSU, Dietzel held the same roles later at South Carolina, leading them to their first ACC Championship, and is now in the LSU and South Carolina Sports Halls of Fame. If you don't recognize the man on the right, that's former USC baseball head coach Ray Tanner, who stepped down/up to take over the AD role at USC last summer. 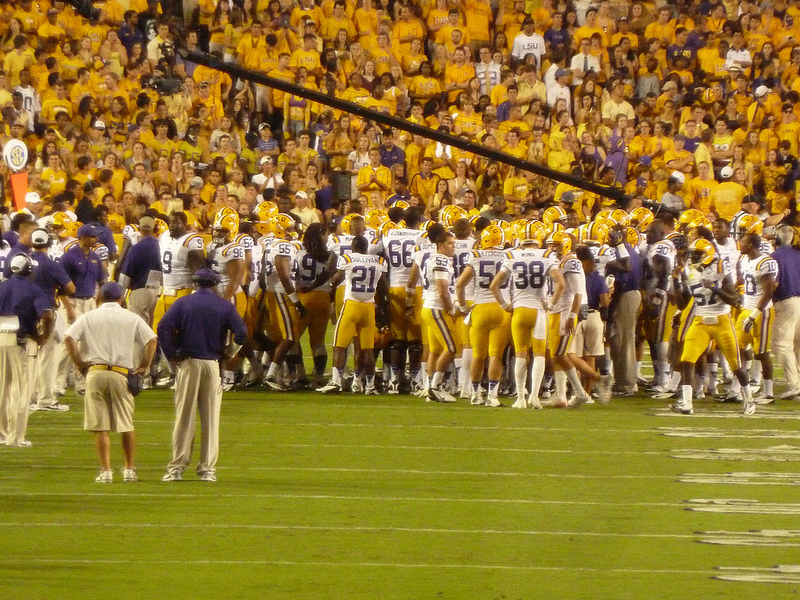 I won't rehash the game, except to point out a few special moments. On the first drive you could just feel how important it was to get that TD. When Les called the second timeout, facing a 4th and Goal at the 1, it almost wasn't about strategy at all. As you can see above, the entire bench emptied onto the field and into the huddle. Defensive players circled the huddle, pumping up the guys on O, as if trying to will them into the endzone. Sure, it didn't quite work, and Alexander's false start actually saved us a turnover on downs, but that's the kind of team you want to see. With the O bogged down in the endzone yet again, the D could have just sat on the sideline and resigned themselves to another night of doing all they could to bail out the team. But they got up and got in the O's face, as if to say "We aren't going to go through this again, get in the endzone." I love seeing that kind of fire in the team. 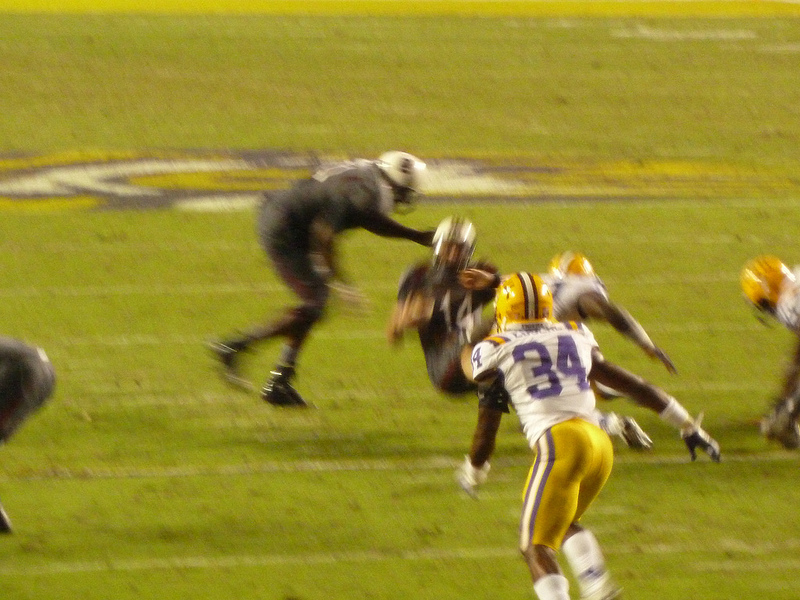 The Defense was just amazing. 34 yards rushing should be a typo, not an actual stat for a team as good as South Carolina. The line did an amazing job stopping Lattimore (when he was actually used) and the ends, with rare exception, kept Shaw in check all night. They stepped up with critical interceptions at key moments and had some amazing performances. The tale of Eric Ried forcing his way back onto the field after re-bruising his sternum on his interception is one that will be told for ages. Take away the touchdown off of the early, long return interception and turn some of LSU's redzone field goals into TDs and this game isn't even close. 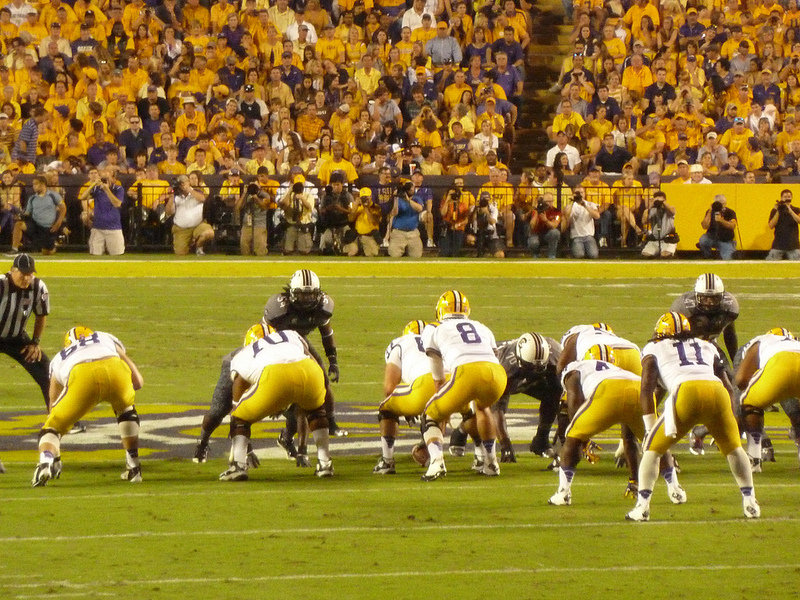 I'll say this for the crowd. Sure, they booed. They always boo. But they cheer too. Long drives were met with enthusiastic applause and loud cheers for every first down. The crowd seemed to know that if they turned on their own team again, it would only make things worse. So they cheered instead, hoping that things would finally get into a rhythm, as they did in the 3rd quarter when LSU scored it's first touchdown in more than 14 quarters of SEC play. 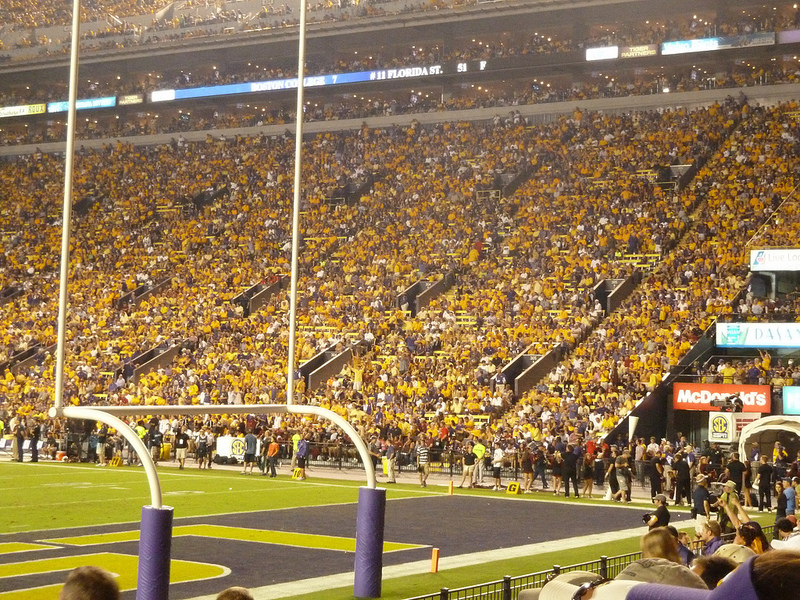 It wasn't all good though. 4th Quarter starts and LSU is driving down the field, still down 14-10. The drive stalls in the redzone again and LSU is forced to kick a FG instead of taking the lead. Down 14-13 with 10:17 still on the clock, 2-3,000 fans in the east and west stands decide they'd had enough and leave. They just get up and walk out, resigned that our offense will never be able to catch up. Shame on each and every one of you. Not 3 plays later Eric Reid makes a monster INT that sets LSU up to take the lead. 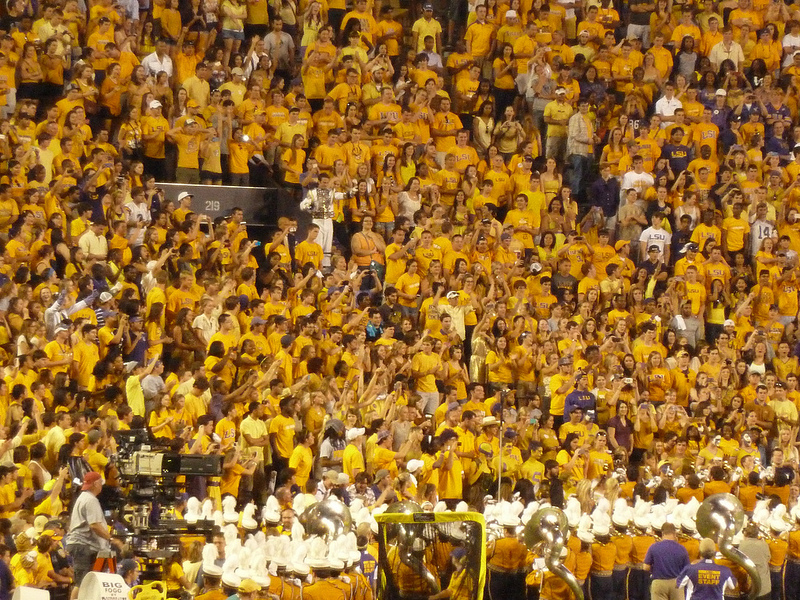 It's a long shot from the very end of my camera's range, but there's the Drum Major, seventeen rows up, as TGBFTL rolls through the old Blue Devils arrangement of When a Man Loves a Woman. My only minor complaint is that you could only really hear it in the student section. However, video evidence confirms that it was indeed awesome.

The band also continues to play Gangnam Style, and as much as I want to be an old man about it, the students are always dancing along and enjoying it and it's a catchy tune. I'm still trying to find a decent video of it. 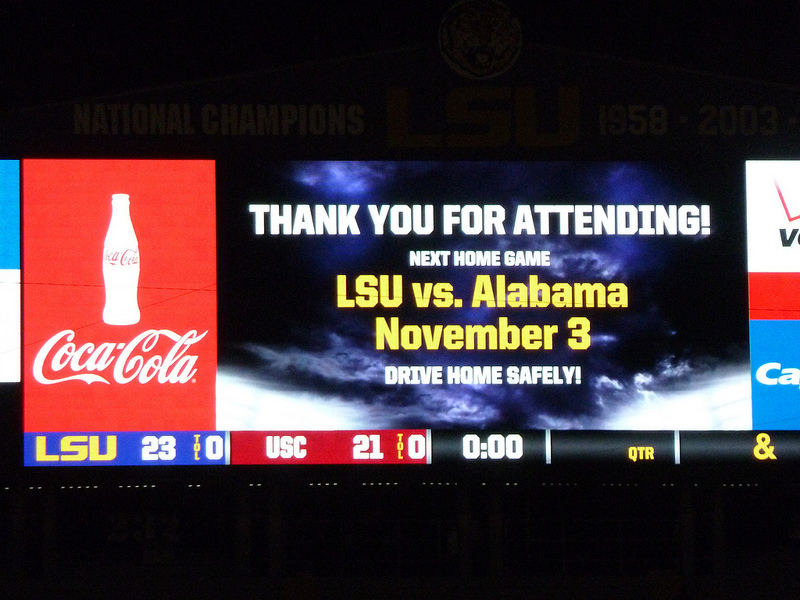 Next Week: PodKATT goes to Aggieland

(BTW, I have an extensive report about my trip to Auburn earlier this year, but it's been delayed due to my own time constraints. Look for it during the bye week.) 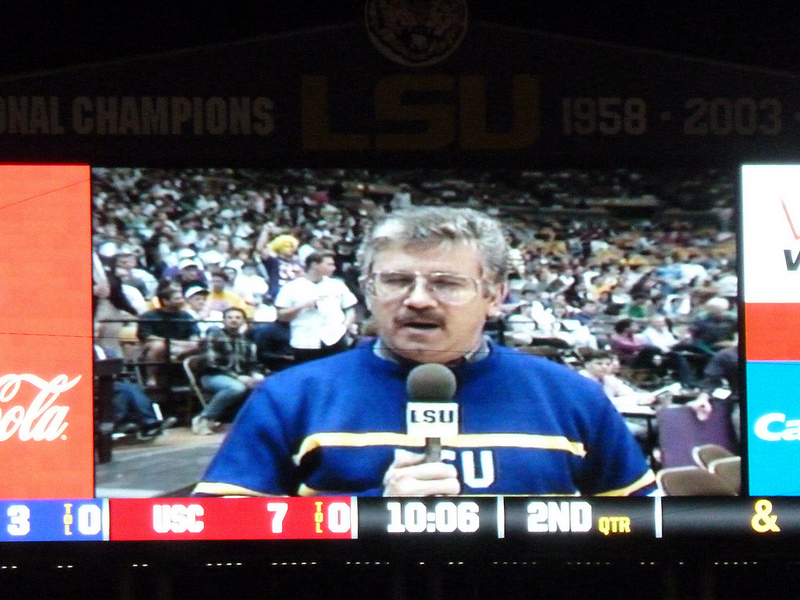