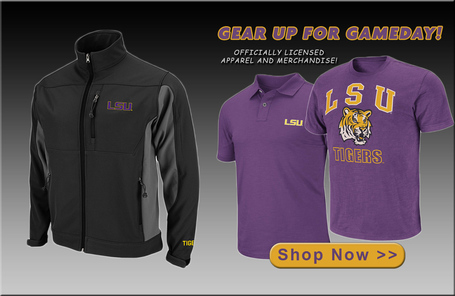 FTC disclosure: This contest is sponsored by Gameday Depot and SB Nation.

Skigator93 wins this week's 2012 ATVS-Geaux Show Pick'em and gets the $10 gift certificate, which he or she can spend on officially licensed LSU Tigers hoodies, jackets, t-shirts and more at the And the Valley Shook licensed store.

Skigator93, look for a confirmation email with instructions on how to claim your prize. If you don't respond within three business days, the rules require us to award the prize to the next person on the list.

There is still a $50 gift certificate up for grabs to whoever finishes first for the entire season, so it's never too late to join the game by following the instructions HERE.

Big jumble this week with so many folks going 8-5 to end up ninth.

Thanks to going 7-6 last week, I just barely held on to the top spot in the overall rankings. Almost 50% of the field is within 10 points of the lead, but that number is shrinking every week as the season passes the halfway point.

The BXII is the cause for both of this group's major upsets, with K-State failing to cover and WVU running into the brick wall of Tommy Tuberville's Red Raiders. Nothing else really of note from the weekend (though I will say things were looking great when Duke was up 20-0 on VT)

Onto the picks. Clemson's gonna Clemson themselves and Vandy's getting that SEC win, I just know it. Mich. St. completely destroys the last shred of relevance the B1G has this season and Florida sets the tabel for an epic Georgia Dome rematch (I Hope). K State will show the world how good it's D is and Baylor kicks the Horns while they're down (and gets the Fire Mack Brown express up to full speed)

ALL PICKS DUE SATURDAY BEFORE KICKOFF!