The LSU offensive line rose to the challenge against the talented front four of South Carolina.

The guy who received the most credit on the line was Josh Dworaczyk and his assignment of blocking super sophomore Jadeveon Clowney. Dworaczyk was starting at left tackle in place of Alex Hurst. Les Miles said of Hurst, " I do not know the chances of him returning."

The good news for LSU fans is that, without the struggling Hurst, the offensive line put together their best performance of the season. The Tigers raked in 258 yards on 53 rushing attempts ending with a 50-yard touchdown run by Jeremy Hill.

But did Dworaczyk really win the battle versus Clowney?

Podkatt gave me the assignment of seeing how the matchup actually broke down. Rushing statistics don’t necessarily tell the story. The best thing about film is that it never lies.

After my study, the masses are right. Dworaczyk borderline manhandled Clowney. Dworaczyk was not only more physical, he also outsmarted and outhusteled him in every facet of the game. This is how the 67 plays broke down between Dworaczyk:

Plays that neither won aka "Push": 23

The high number of "Push" plays is because there are often times defensive ends are not part of the play. LSU ran the football to the right often (away from Clowney’s side) and used very quick dropbacks on passes. If the play went to the right, I usually gave it a "push" grade. There will also some snaps that ended in a tie.

Before we get into some actual film, a couple of important tidbits must be stated:

Dworaczyk told me after the game the key to blocking Clowney was "knowing your opponent." He said he watched a lot of film to prepare to block Clowney.He also said his adjustments to his game came because he had to change his approach.

"It comes down to knowing yourself. I really started to focus on what my strengths were," said Dwoarczyk. "Mine is getting my hands on my opponent as fast as I can."

In my study, Dworaczyk did exactly that. He got his hands on Clowney as fast as possible on pass blocking. This is opposed to other tackles that take the traditional route of giving ground to Clowney. 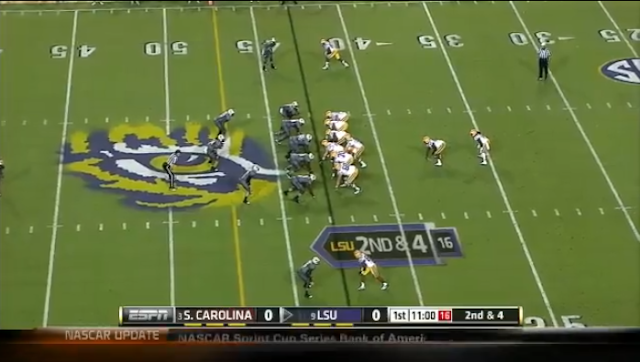 LSU is in the I-formation with one receiver over to the right of the formation. With Josh's hand staying on the ground, it doesn't blatantly give away it's a pass especially after a great run on first down. But Clowney is a smart player who is great at picking up reads. It is clear Josh doesn't have much pressure on his hand as he did the play before, which tipped away this play being a pass. 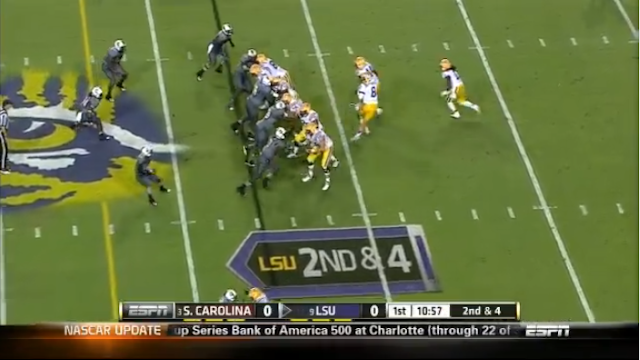 Dworaczyk doesn't give ground like most tackle would do versus Clowney. Right when the ball is snapped, Dworaczyk is looking for the center of Clowney's body to open up so he could get a clean hit on him. This isn't the best get-off from Clowney, but he already had a tough start in this particular series. Where Clowney makes the mistake is not attacking. This is rather tentative from an athlete of his caliber. 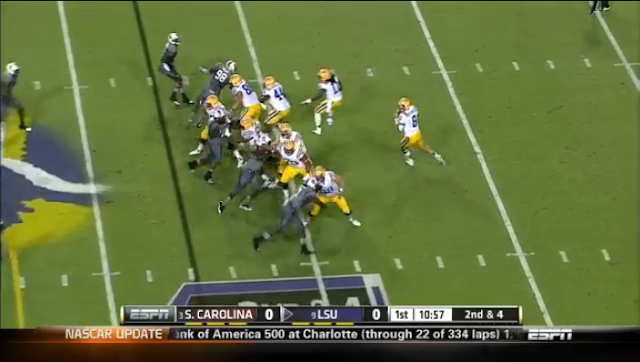 Dworaczyk gets his right hand on Clowney early and then takes a more fundamental approach to playing tackle by giving a little ground and running his opponent up field. Clowney does a great job of finally getting low to try and get some push, but it's too late. Dworaczyk's positioning is flawless, which helps create a clean pocket for Mettenberger. 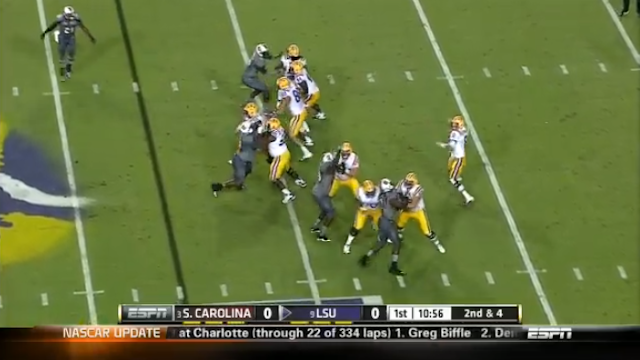 Because the protection was so good across the board for the LSU offensive line, left guard La'el Collins is able to peel off the defensive tackle to help Dworaczyk on Clowney. All Clowney can do now is try to bat down a pass, which he did successfully twice in this game. Still, this is a win for Dworaczyk.

LSU did a great job of giving Clowney different looks throughout the game. So when Dworaczyk left him unblocked on the next play, it turned out being a huge gain. 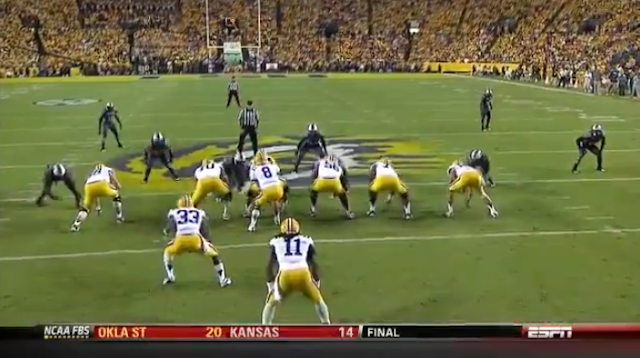 Notice how Josh's split is really wide, as in the gap between the guard and tackle is huge. This usually indicates the ball is coming that way with some funky movements from the offensive line. 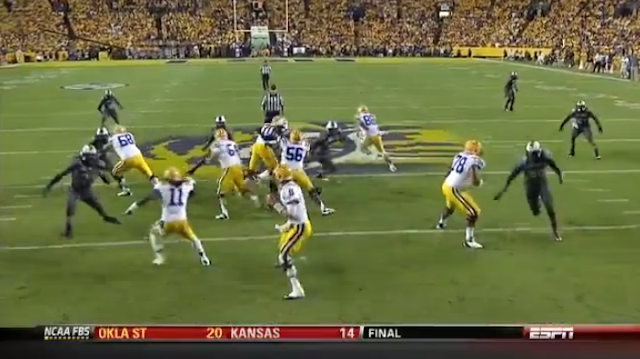 Dworaczyk leaves Clowney unblocked and heads up field to the second level. Running back Spencer Ware gives Clowney a look that he is about to block him. 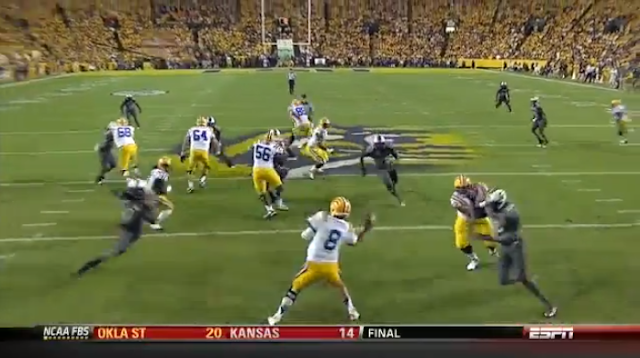 Ware gives Clowney such a good fake that it knocks Clowney, who was expecting contact from Ware, off balanced. This gives Mettenberger even more time to get rid of the football to Ware for a screen. Notice down field the blocking. #56 Trai Turner has his man locked up and #68 Dworaczyk, #64 PJ Lonergan and #88 Chase Clement all are successfully blocking on the second level. 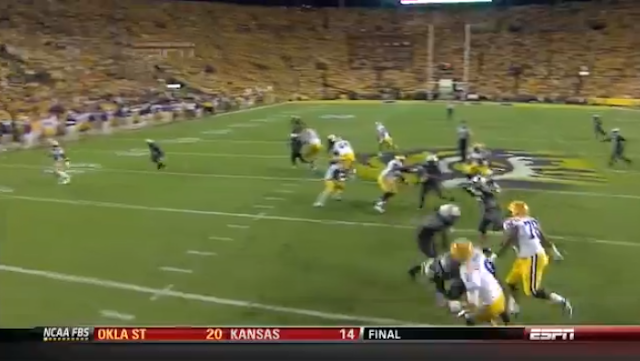 Mettenberger takes a shot, but Ware gets the football with a hole a Mack Truck could literally fit through. 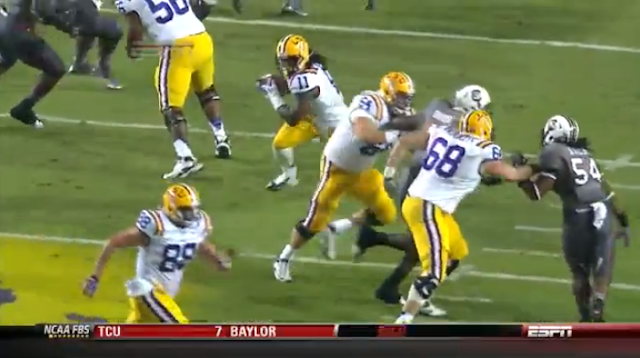 This is what I like to call "back to the hole" blocking from the Tigers. When a blocker is able to get their body between the playside hole and defender, the blocker's back is facing the hole. This what offensive line coaches dream of. Perfect form across the board.

But the long-term key of the play is that it keeps Clowney off balanced. He's already faced a single, double, late double team blocks to go along with being unblocked but getting screened under. This opening sequence kept him off balanced for the rest of the game. 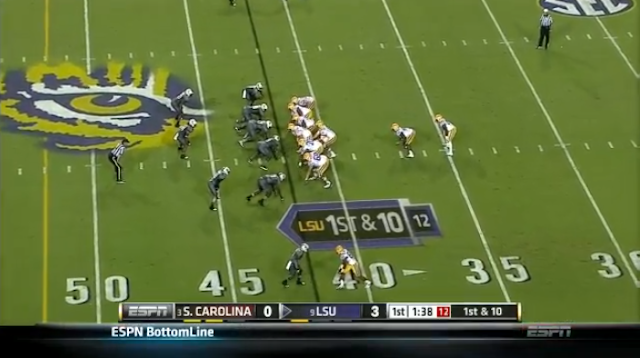 In watching film, this is the one play that stuck out to me. In speaking with Dworaczyk on Monday, he pointed out this play where he made a huge mistake. This was the only blatant error I tallied from him the entire game.

"There was one play I blew an assignment and La'el saved me," said Dworaczyk. "It could have changed the game."

Early in the game, LSU wasn't afraid to pass on first down. Much like the first play we studied, LSU is in a formation they like to run out of. But Clowney, who is great at picking up signs, sees Dworaczyk isn't putting too much pressure on his right hand in a 3-point stance. This tells Clowney it could be a pass. 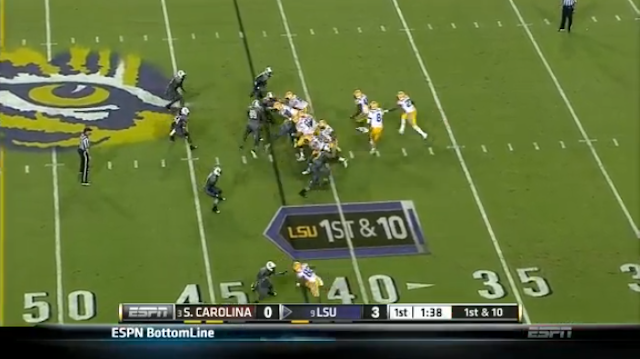 Clowney takes a really tight angle to the quarterback as the ball is snapped and Dworaczyk leaves him unblocked. Where Dworaczyk made his mistake was that he thought the running backs, JC Copeland and Kenny Hilliard, would be helping in protection to his side. Instead, the running backs go the other way. So, in other words, Dworaczyk has about as bad of a missed assignment possible in football. he let the best defensive end in the nation, Clowney, have a free shot at a quarterback's blind side.

But this actually ends up being one of the luckiest breaks for LSU during the night. Notice that the defensive tackles for South Carolina are running a "stunt" to attack the freshman on the right side of the LSU offensive line. So this means the defensive tackle lined up over center Lonergan and left guard La'el Collins runs to find a hole to the right. This gives Collins nobody to block, allowing him to pick up others' scraps. On this play, Collins doesn't have to worry about the defensive tackle. His awareness feels Dworaczyk leaving Clowney unblocked, then he notices he needs to help. 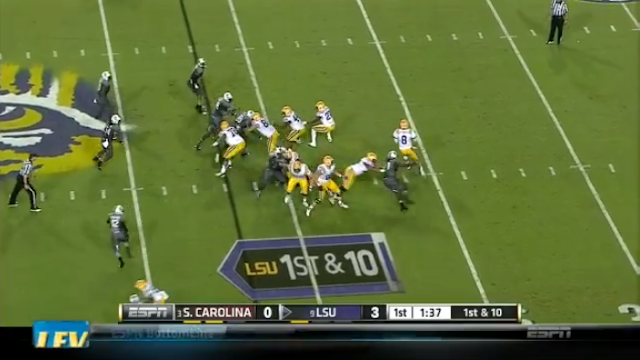 Now, we see Collins in a full extension dive to get a piece of an unblocked Clowney. You can see a bewildered Dworaczyk notice he made a mistake. Clowney took a near-perfect line to the quarterback, dipping his shoulder to try and avoid contact from Collins. 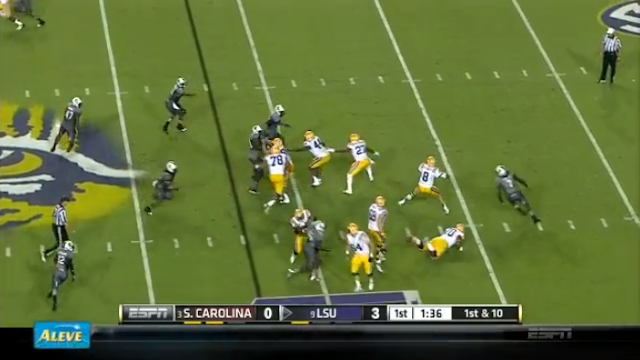 The natural athleticism and strength of Collins is able to get a good enough push on Clowney to re-direct his path to Mettenberger. If Collins doesn't make this block, Mettenberger would have been crushed by Clowney right when he was delivering the football. This could have resulted in Mettenberger with a serious injury, a game-changing turnover, or both.

The end result of all of my film study is simple, Josh Dworaczyk played the best he has ever played in a LSU uniform. Other than the previous mistake, he was spectacular.

But the bigger point is that it's no coincidence the line played the best when Dworaczyk was at left tackle. He is a coach on the field. Last year, he stressed to me how much he learned from sitting on the sideline and coaching his fellow lineman. Collins played his best game clearly because he is comfortable next to a guy who knows the game so well.

Next week, LSU plays Texas A&M. The Aggies defensive, which has been awful at times this year, does have one of the best defensive ends in the conference in Damontre Moore. Moore, who leads the league in sacks, is very physical and relentless. He doesn't have the same natural pass rushing skills as Clowney, but does share similar characteristics.

If LSU establishes the run like they did last week while protecting the quarterback, there could be an opportunity to get the football downfield.