Nothing's more depressing than looking at these numbers each week and seeing Alabama dominating on both sides of the ball. The truth hurts. A lot.

I took a week off not because ORtigerfan has been slacking, he has not. I've been slacking, and sometimes, I don't want to write the same column each week. There's only so many ways you can say AJ McCarron is playing great, Collin Klein is a stud, and Matt Barkley is overrated as hell. But then lo and behold, watch the narrative change... 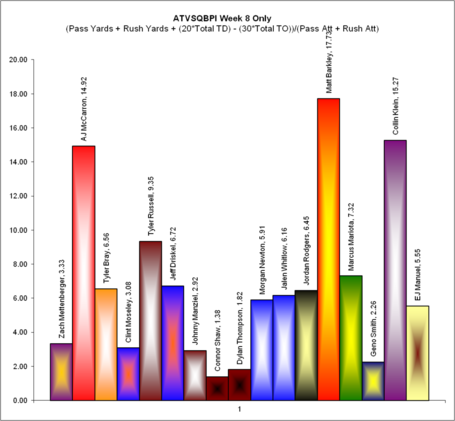 Matt Barkley is THE AWESOME. He is all the awesome! Oh, he was playing Colorado. Never mind. There is nothing quite like a good quarterback playing a bad defense, as Klein and McCarron joined the party and tried to break the system again. This just in, bad defenses let up tons of yards, especially to good players. Shocking concept. 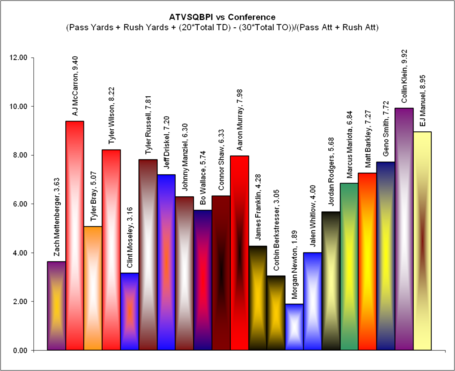 We're at the point where it is far more useful to look at conference only numbers, just to throw out the games against Directional state. Yes, I know this means you lose the stats of a team's one good out of conference game, but it's worth it to get a more consistent measurement against conference foes.

Even with his massive game against the hapless Buffaloes, Matt Barkley is essentially Jeff Driskel. So let's slow the hype machine just a tad. Gen Smith still has better numbers, though it's hard to imagine how. And while Collin Klein is rightfully getting all of the praise right now, it is hard not to admire the ruthlessly efficient season AJ McCarron is having. Sure, he's got talent around him, but if he is a "game manager", he's the John McGraw of football managers.*

*It's a baseball reference. Look him up.

What is discouraging is that Zach Mettenberger is squarely in the "lousy" part of the graph. He is less Mettensavior and more Frankenberger's monster. There's no way to spin his numbers as a good thing. Even more surprising is Tyler Bray under the SEC average. The standard line on Tennessee is great offense, bad defense, but the offense isn't pulling their weight. Which sort of explains this season. Imagine how pissed you'd be if Mettenberger was playing like this and we were relying on the offense to the better unit. That's what it's like to be a Vols fan right now. 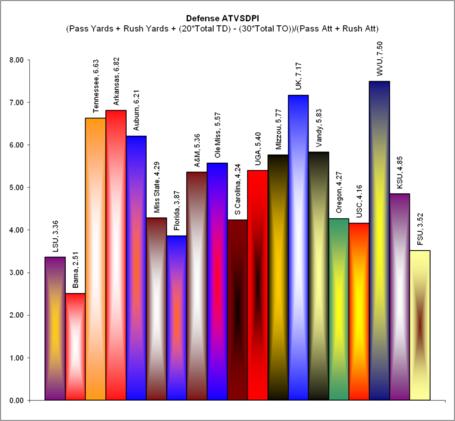 Alabama is lapping the field right now, defensively speaking. They've played a bit of a soft schedule, but not that soft. LSU and the two Florida schools can at least stay in the conversation for best defense, but Alabama is the gold standard right now. So let's marvel that Bama has the top passer in the SEC and the best defense in the country. Might as well throw in the towel now, right?

Auburn's season from hell, or as I'd like to call it, the Payback is a Bitch Tour 2012, continues unabated. Their defense has taken lots of heat and while it is bad, it's not "oh my God" bad. Auburn's doing slightly better than Tennessee and Arkansas, who both have pretty miserable defenses, and Kentucky is sort of the inverse Alabama. They've got a lousy quarterback (two of ‘em!) paired with an awful defense. Just in time for Midnight Madness.

But West Virginia's horrific defense is truly something to behold. Their best performance in a conference game was against Texas, a game wildly described as a "shootout", and rightfully so. WVU put up a 7.31 ATVSDPI in that game, meaning that even if you halved their average yards per play, they still don't achieve three yards and a cloud of dust. WVU gave up 333 yards passing this last weekend, and it wasn't within TWO HUNDRED YARDS of their worst defensive performance of the season. We are witnessing something historic with WVU's defense. This is perhaps the worst defense a top 25 team has ever had.