More of the same, with new levels of awful

It was the best of times, it was the worst of times. Week 9 gave us some of the very best performances of the season while also giving us performances so awful that it boggles the mind 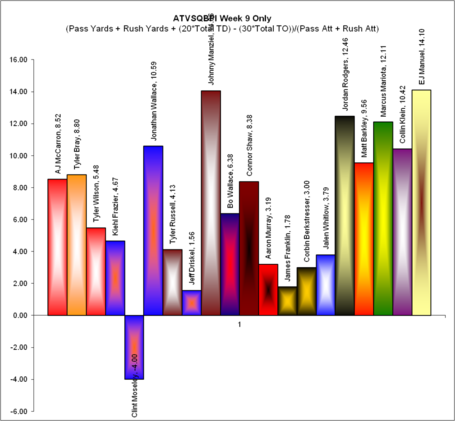 The collection of talents putting up huge numbers was largely the usual suspects: Klein, Manuel, and Mariota nationally and Johnny football in the SEC. But a new name did pop up, though we should read precisely nothing into it. Jordan Rodgers' 12.46 is nearly twice his best performance of the season (6.45 vs. Auburn), but let's be clear: UMass sucks. It's hard to read anything into that other than Vanderbilt playing an outmatched team, but then again, how cool is it for Vandy to say they were playing an outmatched team? That's the true mark of progress.

The terrible performances are more fascinating. Clint Moseley teaches us all an important lesson in smaple sizes as he put up a -4.00 ATVSQBPI. He also had precisely one passing attempt and one rush for -8 yards. And as terrible and hapless as Auburn looked against A&M, Frazier still managed to post a 4.67, which is far better than Mettenberger's 3.33 against the same defense. You may commence the cutting now.

But the greatest ATVSQBPI's were posted in the Cocktail Party. Aaron Murray went for 3.19 and won. Mainly because Driskel had a 1.56. The two quarterbacks combined for SEVEN turnovers, which just killed their effectiveness, and in Driskel's case, likely cost Florida the game. Yards are great, but turnovers will kill a team. Both are shining examples of the importance of protecting the football. 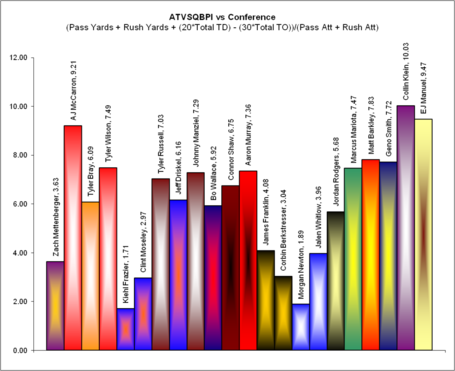 What happened to Geno Smith? At this point in the season, you can see the "good" quarterbacks as clustering together right around a 7.0 ATVSQBPI. That's where Smith finds himself, having fallen from the stratosphere of "Heisman contender". But while his numbers are moving backwards, Barkley keeps improving his numbers. We're reaching a point at which the season numbers are far less volatile, which makes Smith's steady downward trend even more disturbing.

And how good is Tyler Russell? He's right in the cluster of good quarterbacks, right at 7.03 in conference play and 7.83 against all opponents. However, he's played precisely one good team, Alabama, and he put up a pedestrian but not awful 4.13. How much is he a product of schedule and how much is that he's a good, solid QB who takes care of the football? That will be interesting to watch over the final month. 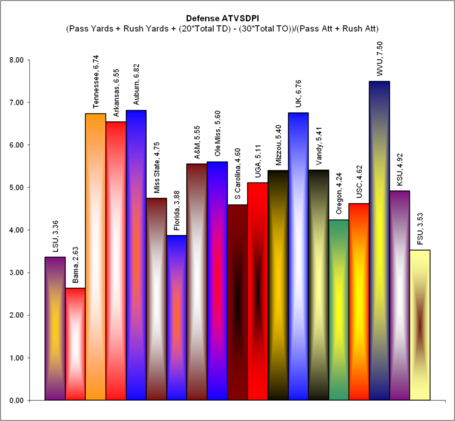 It's a popular line that the rest of the country doesn't play defense like the SEC. And maybe there is some truth in that, but the glamour teams from around the country all bring some pretty impressive defenses. Oregon, USC, Florida St., and Kansas St. all are performing above the SEC average defense, and better than almost every SEC defense except for that elite top three.

In fact, the weakest defense of the group is probably the one people popularly think is one of the best: Kansas St. KSU is the defense that is closest to average, and this is in comparison to Pac-12 defneses, which have a low reputation and have to face some pretty explosive offenses.

Also, this is where I put out the public call to ORtigerfan to add Notre Dame to these numbers this week. It's time to start taking them seriously and let's be honest, we're all curious how they grade out.