So here we are, week and a half since bowl selections and very little said about LSU’s matchup with Clemson. Despite our issues with the bowl process, we really can’t complain about the matchup.

Share All sharing options for: Five Things About LSU's Matchup With Clemson

The other (other) Tigers finished 10-2 on the regular season, 7-1 in the ACC. Here are five facts.

1. Clemson averages 42 points a game and ranks in the top 10 nationally in the following categories: scoring offense, total offense, team yards-per-pass-attempt, third-down conversions, scrimmage plays of 20-, 30- or 40-plus yards as well as passing plays of those distances plus redzone scoring and touchdown percentages. And they're not far behind in passing offense, offensive plays run and offensive yards per play.

2. Offensive coordinator Chad Morris is a longtime friend and protégé of Gus Malzahn and it shows. Clemson averages about 80 offensive snaps a game and one every 21 seconds. LSU averages about 27 seconds per play and about 69 per game.

3. It should come as no surprise that his success has attracted some attention. Morris is reportedly one of Texas Tech's top targets to replace Tommy Tuberville. He's a Texas native and spent 16 years coaching high school ball there. Clemson's also already lost co-defensive coordinator Charlie Harbison, who will be following Ellis Johnson to Malzahn's new Auburn staff, and recently declared sophomore receiver Martravis Bryant academically ineligible for the game. Bryant caught 10 passes for 305 yards this season, with four touchdowns.

4. Morris' offense, like Malzahn's, differs from many spread attacks with its heavy use of pulling offensive linemen. Powers, counters and traps are some of Clemson's run-game staples. LSU saw a lot of looks like this earlier this season at Florida, albeit out of more conventional sets as opposed to spread formations.

5. If anybody hasn't already stumbled on to this awesome gallery of high-school pictures of major college football coaches, here's a picture of Clemson Head Coach Dabo Swinney from his in Pelham, Alabama. I don't know that I really have a point here, I just wanted to post this picture. 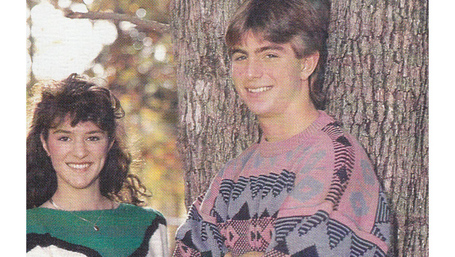 Not sure what I like better, the sweater or that Midnight Rockers-era Shawn Michaels mini-mullet.