With the college football season reaching its final crescendo, Doug Flutie is a busy man. However, we were able to catch up with him just before he went to New York City for tonight's Heisman Trophy presentation. He gave us his thoughts on the Heisman race, LSU's quarterback situation, the coaching change at his alma mater, and more. 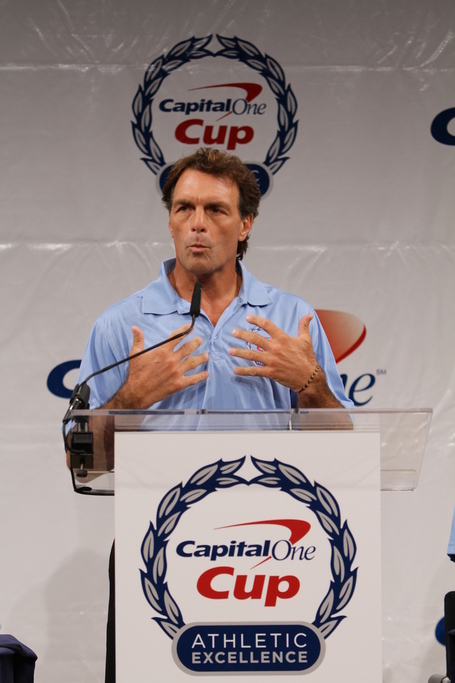 Deniz Koray: Let's talk about the Heisman race since it's coming up. What are your thoughts on this year's race? Could you tell us a little bit about your ballot?

Doug Flutie: You know, it's funny how it changed throughout the year. You're talking about Geno Smith at the beginning of the year. He was just cruising. Everybody looked at his numbers and thought "Oh My God." He hasn't thrown an interception and all that. And the frontrunners changed three or four times this year, but then Johnny Manziel beats Alabama and people realize he's having an unbelievable year.

He's leading the SEC in all kinds of categories, doing things no one's ever done in the conference before. It's been a fun year from that standpoint. And there are good stories. Manti's off-the-field stuff , it's just been a great year for college football.

As for my ballot, all three of the finalists were on my ballot. I won't say what order I voted because we're not supposed to. I know some guys put it out there but we're asked not to.

I think for Manti to be in New York and be one of top 3 is a win for him. As a defensive player, that's just amazing. Johnny Manziel is probably the front-runner because of the momentum he had at the end of the year, but there's always a chance that he and Collin Klein could split some votes since they are from the same region, and Manti could surprisingly end up winning.

DK: Do you think any guys were overlooked? Maybe a guy like Marqise Lee?

DF: You can make an argument for a lot of guys. Kenjon Barner's numbers are crazy. Montee Ball's career in general has been ridiculous. And you look at Marqise, with the USC people talking about him being the best receiver that's ever come through the school. It's amazing considering all the guys that have come from USC.

Maybe he deserves to be there, but it comes to the voting and quarterbacks and running backs get a lot of the attention. But this year, you could say we have very open-minded voting. You have a freshman, a defensive player, and a quarterback who kind of wins ugly and doesn't look like the prettiest athlete on the field but is very effective.

If you want to talk defensive players, there are guys like Jarvis Jones and Jadeveon Clowney who are ridiculous athletes and could have deserved a place.

DK: Do you get a specific joy watching a guy like Johnny Manziel who is so dynamic and even though he's listed at 6'1", that seems a little embellished? Do you have a soft spot for the undersized guys?

DF: Yeah, I really do. I really enjoy watching him play. A lot of his mannerisms remind me of myself. He's got this straight ahead speed that I never had though. He can just take off and run 80 yards.

He has comfort in the pocket and can also move around, just wheel and deal. He can throw the ball off either foot, running sideways. All of that stuff. I thoroughly enjoy watching him play.

DK: Moving ahead a few weeks, we have a lot of bowl games coming up. And while we're all excited about the Notre Dame-Alabama match-up, I have to say I'm underwhelmed with some of the major match-ups this year. Do you feel the same way, and are there any under-the-radar games that you're looking forward to?

DF: I think part of the frustration is you see Northern Illinois playing Florida State, and while they are the elite of the ACC, but with the ACC being very mediocre, it's not exciting.

Wisconsin-Stanford isn't a flashy game out in the Rose Bowl. But the national championship game is going to be one for the ages because of the match-up. It's going to be a throwback game in terms of the names.

I'm fired up to watch Texas A&M and Oklahoma play in the Cotton Bowl because of Johnny Manziel and the potential for the numbers he can put up. I want to watch Johnny again.

And Louisville-Florida in the Sugar Bowl is going to be good. I think people lost track of just how good Florida was this year. That's what happens when you lose a little early on in the season.

DK: Do you have any thoughts on the LSU-Clemson game? I think that could be interesting even for neutral viewers.

DF: Yeah, well I think Clemson is so dynamic offensively. Tajh Boyd, there's a guy who could have been a Heisman candidate. They are a flashy offense that can put up a lot points, but with that LSU defense, I think they'll harass Tajh. Their defense is as good as they usually are.

Mettenberger is playing better than he ever has. I thought he was very impressive in the Alabama game. I thought he was exceptional. And they have the ability to run the ball with 3 or 4 interchangeable parts, Hill, Hilliard, Ware, Ford. They can be so physical running the football and negate the athleticism of Clemson's offense.

DK: That's a good segue for my next question because I wanted to talk about Mettenberger. Scouts will like that he has prototypical size. He's about 6'5", 230 pounds. But at the start of the season, he didn't have great pocket awareness and he took too much time getting off passes.

But he made noticeable improvements, and you seem to be impressed. Do you think he can be an All-SEC candidate next year and maybe even garner national attention?

DF: I think towards the end of the year he showed that he could make the throws. He stood in the pocket and took a lot of shots against Bama. Yeah, I think he can be that kind of guy.

You lose sight that these guys are first-year starters. I guess Johnny Manziel being a freshman, he got it going right away, but that's more of an exception.

There were a lot of high expectations for Zach coming into this year, but there's no substitute for experience on the field. You just get more and more comfortable.

Don't underestimate the value of experience. You have to catch up to the speed of the game, and all of a sudden the game starts to slow down.

DK: I was wondering if you could talk a little bit about your role with the Capital One Cup

There's an emphasis on national championships and the winner of the whole competition gets $200,000 in scholarships for their men's program. And another $200,000 for the women's champion.

Right now, it's early but Oklahoma State and USC lead on the men's side, while UNC leads on the women's side. Every sport counts though, and I think it builds camaraderie among the various teams at each school.

DK: Your alma mater had a big coaching change in the past few days. Steve Addazio, the former Florida offensive coordinator and Temple head coach, is taking over the BC program. What are your thoughts on the hire?

DF: I think it's a great hire. He's been exposed to so many great programs. He was down with Urban Meyer for six years at Florida. He was at Notre Dame with Bob Davie.

He's a fiery guy, and I think he's going to change the attitude around the program. We all love Frank Spaziani, but things went downhill, and we needed a change.

It's definitely a change in direction. He's going to build discipline with this team. I had a chance to talk with Steve the other day, and he's got his mind set on how things are going to be done. It's going to be almost like a military style when it comes to the team's work ethic.

DK: When it comes to guys like Chase Rettig and the rest of the BC team, how much involvement do you have? Do you get to talk with them during the season or watch practices?

DF: I usually see it from afar. I'm not too hands on, but I've been in touch with Chase the past few years. I've gotten the opportunity to watch some film with him and throw the ball around for fun.

He's a great kid, with a big time arm. I feel bad for him. He's had five different coordinators now. It's got to be frustrating. We were talking about game experience and how you build from that. Well, you are starting all over every time you have a new offense.

It's like Day One again. You have to learn the vocabulary before you step on the field, and it isn't second nature. You're thinking because you are memorizing information, and it isn't instinctive. He has to start from scratch all over again, and it's a real pain in the neck.

Chase has a lot of talent. He's really good. There are some positions BC is weak at right now and hopefully recruiting can take care of that.

DK: Doug, I know you have to run in a minute but I wanted to ask you one more question. Other than Johnny Manziel, are there any other players who remind you of your playing style?

Well, Russell Wilson was in that mode. I'm trying to think if there's anyone else. Johnny (Manziel) definitely and going back last year, Russell Wilson reminded me of my college days.