Share All sharing options for: 2012 LSU Baseball Preview: The Infield

Move aside, basketball and recruiting geeks -- baseball is back!

I'm not going to lie -- I think LSU got absolutely screwed by the committee last year. But, last year is last year, and Mainieri needs to improve the team to make this year's tourney, and improve it while losing the team's best player. No small task.

The failures of last season have many causes, but perhaps the biggest cause -- other than Mainieri's unfortunately obsession with throwing away outs -- was way too many unproductive spots in the order. And most of those unproductive spots were infielders. LSU needs to see some upgrades in the infield to contend. 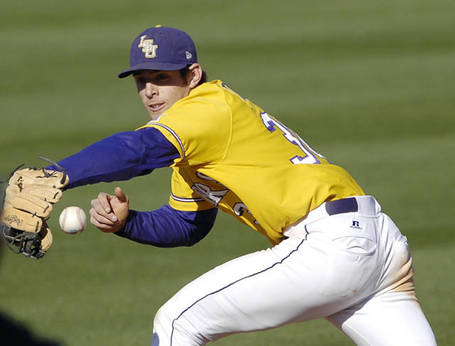 Speaking of unproductive spots in the order. Let's not mince words, Ty Ross was miserable at the plate last season. He's a good defensive player, too good to just bench for his weak bat. But this is downright ridiculous. If you can't get on at a 30% rate, that's just unacceptable. Really, all we can do is hope he turns it around, and it was just a matter of a freshman being a bit overwhelmed at his first bit of action. See how much Nola has improved from offensive liability to top player on the team.

1st base has been a team weakness for some time now. It's not quite as cursed as the hot corner has been, but LSU also needs more production out of 1st base. Edward was supposed to be that guy two seasons ago, but he has never really developed. He's a nice bench bat with some decent pop, but he's never been a middle of the order hitter. He'll play a role this year, but it looks like the job here goes to freshman Tyler Moore who put up silly numbers in high school. LSU's leading returning home run hitter only hit 4, so they team desperately needs Moore to be the real deal. If he's not, Edward will take over the job, or at least be part of a platoon. He's a great safety valve to have, but we really want Moore to be the star he's been billed as.

JaCoby Jones was one of the bright spots last year, but he's moving to centerfield to "replace" Mikie Mahtook, as if that's possible. What permits this move is JUCO signee Casey Yocom. Yocom's a decent bat with gap power and good speed, but he's not a middle of the order hitter. Didier probably won't be the first bat off the bench, that would be Grant Dozar, but I'm listing Dozar under 3rd base just because I have to put him somewhere. Yocom is a guy who has to be as advertised, because we don't have much outfield depth and Mainieri doesn't want to have to move Jones back to the infield. Really, he'll be given a long leash due to his reputation as a good defensive player. LSU's pitching staff (SPOILER ALERT!) is really good, so Mainieri can afford to build his lineup around defense in the middle of the field. Convert batted balls into outs. So as long as Yocom fields his position well, he should keep the job.

Nola failing to sign a pro contract is the best news of the offseason. He's a defensive wizard, a team leader, and a pretty reliable hitter. He's the whole package, and a contender for most beloved Tiger ever. He is the rock upon which this team is built.

3rd base has been a Vortex of Suck for LSU for a few years now. Players who do well elsewhere get to 3rd base and suddenly see their skills evaporate. Only Hanover has been able to be marginally productive, and he is a living symbol of Mainieri's strategic shortcomings last season. On a team that struggled to get guys on base, LSU had a guy sporting a 407 OBP sacrifice bunt 15 times, nearly 10% of his plate appearances. It was just a stunning misuse of talent. Hanover lacks power but he's a guy who can get on base, and it was a skill Mainieri just threw away last year. It drove me insane.

Grant Dozar was another problem child last season and will continue to be this season. He's a lefty bat with some pop, which is valuable, but he's a guy without a position. He plays all over the diamond as a super utility player. If he fills that role again this season, we should be having a decent year. If he's regularly, say, fielding balls at second or playing first, then we know a guy we were counting on bombed out. We can't really afford that.

Tomorrow... the outfielders OR how do you replace the best LSU player in two decades?