Share All sharing options for: 2012 LSU Baseball Preview: The Outfield

Mikie Mahtook is not walking through that door. You cannot replace 383/496/709 plus 29 stolen bases. You can't even dream of replacing that. Mahtook got on base nearly half of the time, and hit for power. And was a terror on the base paths. 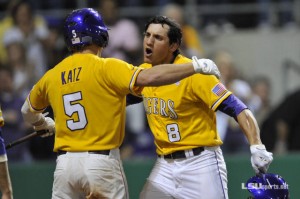 We miss you, Mikie.

Given the low run scoring environment modern college baseball now exists in, relatively speaking, that is right up there with any season in LSU history. It's Todd Walker-esque, especially once you make an era adjustment. Mahtook was a great, great player.

So, now that we're all depressed, let's see what we have in the outfield this year.

Boys and girls, here's the best returning offensive player on the team. Go look at Mahtook's numbers again. It's okay to start drinking. It's not unreasonable to expect some improvement in Katz's game, but that's not going to get him anywhere near Mahtook's orbit. The good news is, since there's no one big bopper in the middle of the order, Mainieri will be less inclined to go bunt-crazy again, to set the table for no one. I'm reaching real hard for a silver lining. I don't want to rip on Katz, because he is a good player, but he's not a guy you build an offense around. The mantra is balance.

Jones' takes over Mahtook's spot in centerfield, which should mean at least we will be able to replace Mahtook's glove. In fact, up the middle defense is a team strength. You can tell this team is built with the elite pitching staff in mind, as LSU will trot out a plus defender at catcher, second, short, and center. Jones is a legitimate leadoff man who can get on at a 400 clip and steal bases pretty well. He stole 12 last season, the returning leader.

LSU is losing 46 stolen bases represented by two players, Mahtook and Watkins. Now, I've whined about losing Mahtook enough, but I'm not too concerned about the loss of Watkins and his 17 stolen bases. Those steals came at the cost of a dismal 226/351/316 line. Jones is an improvement every which way over that, and he should hold down the leadoff spot all year.

Fields led Northwestern's football team in rushing in 2010. Now, he is LSU's right fielder. He's another Chad Jones (WOOOO!!!) type - a physical football player who also happens to be able to swing a bat. More importantly, he can run the bases and draw a walk. He also led Northwestern's baseball team in doubles, so he has gap power, but that says more about his speed than his power. Fields could be a nice back of the order switch-hitter or at the very least, a good option of the bench.

Rhymes will start the season as the DH or at first due to his injured shoulder limiting his ability to throw. I'm terrified this means he also will be unable to hit, and that the recovery will sap all of his power. Given how last season went, LSU is due some luck. Even if Rhymes can't hit for power, he did steal 8 bases last year, so he's still a threat to run and he is the team's returning OBP leader. Once again, balance.

The bad news here is that the outfield is missing a singular talent like Mahtook. The good news is that every spot in the lineup will be manned by a pretty darn capable hitter, even if they lack depth. The problem last year was too many easy outs -- it seems that a lot of those problems may have been solved.

Tomorrow, the Pitchers OR yeah, they are that good.