FINALLY! Baseball is back and LSU is starting with a pair of teams they should have little trouble against. The Falcons are coming off their best season in years, but they still only won 19 games and were abysmal in conference. They lost their only pitcher with a winning record from a bullpen that had a team ERA of 6.09. Their starting pitching is decent, but lacks experience. At the plate, C Garrett Custons (.330, 6HR, 23RBI, 14SBs), batting 3rd, is their main returning threat. They also hope to improve on a .960 defensive avg from last season

On Saturday, LSU faces the reigning SWAC champs in Alcorn St. The Braves were a mid week filler for LSU last season as Forrest Garrett, Nick Rumbelow, and 4 other LSU pitchers combined for a 3 hitter in a 7-1 knockout. The Braves have lost their best hitter from a squad with a BA of .274. Their pitching is some of the best in the SWAC, with returning senior starters and some impressive returning relief in the pen.

Some huge OOC matchups this weekend with #1UF hosting #19 CS Fullerton, and some surprising road series with #11 Vandy traveling to #4 Stanford and #30 Ole Miss going to #13 TCU. There's also Mizzou's first SEC baseball game in Plainsman Park. The rest of the slate is your typical OOC fluff.

The only ranked v ranked matches this weekend have been mentioned above as the rest of the baseball world eases into the season. For pure interest, the B1G - Big East Challenge is in progress as we speak at various sites all over Florida. The MLB Urban Invitational in Houston this weekend may be your first shot at college baseball on TV, it features a couple of SWAC teams and UC-Irvine and will have a Battle of the Bands in the outfield between some of the games on Saturday. Some games of the series will be on the MLBTV channel on Saturday @ 1pm. 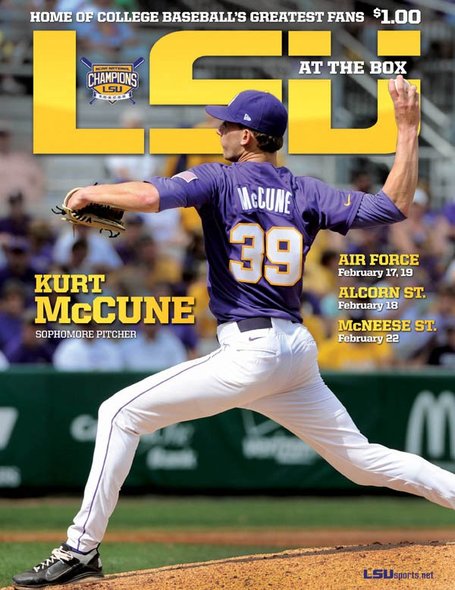 In Focus: McCune Ready to Build Upon Stellar Freshman Season

Weather: It's not looking good. Projected rains this evening and most of tomorrow have already skewed the parade routes in BR this weekend. The chances of getting in 6 total games this weekend are slim. Sunday looks fine.

Radio Only - No TV for LSU until March