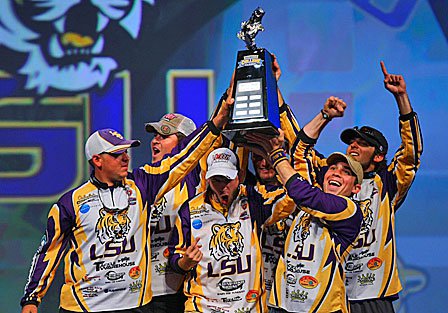 It's that time of year. On Sunday, LSU will face off against Arkansas and LSU-Shreveport to defend their College Bassmaster Classic Championship. Each club fields 3 2-man teams and fish on Sunday with a 5-fish limit. They will fish on Cross Lake, near Shreveport. The weigh-in will be at the CenturyLink Center in Bossier City, just before the Day 3 weigh-in of the overall Bassmaster Classic. Here's the only local media I can find on the event, an interview with the LSU-S team.

Elsewhere, just about every single spring sport is in action this weekend, including the SEC Championships for Track and Field and #13 GYM hosting a meet with #3 Bama.

On Senior Night, the Lady Tigers upset #24 Vandy and reached 20 wins on the year. Like the Men's team, they've been on a hot streak and are trying to secure a 1st round bye in the conference tournament. The Women's and Men's teams have combined to win their last 10 games.

It's a big weekend on the Men's side for just about every SEC team as they all jockey for seeding.

If you are looking to buy reserved seating for the CWS, the application process for the lottery drawing begins today.

One Hog fan argues that the move of the LSU game from Little Rock to Fayetteville could be a sign of ARK leaving War Memorial Stadium all-together, which he thinks is a bad idea. (For all the grief we give it, WMS is decent place, and unlike places like Legion Field, it's been kept decently updated. It is one of those unique quirks of the SEC, one I think should be preserved)

The-Columnist-Who-Must-Not-Be-Named will soon darken your internet quite a bit less as Gannett is putting up paywalls on all of it's local sites. That's going to effect just about every major city paper in LA outside of BR and NOLA.

The rule change to allow 4-year scholarships narrowly passed an override vote this week, and LSU was one of 3 SEC schools who opposed it.

The NFL Combine workouts begins in earnest on Saturday. SB Nation's Mocking The Draft has a list of players who really need to improve their Draft stock this weekend and it includes an old familiar name.