LSU cracked a .400 BA for the first time this year against McNeese St, driven partially by a Cowboys team that kept fighting back early on. Things are still fluid in the lineup, but I think this might be the weekend Jared Foster earns a starting job if he can keep up his blistering pace. Hopefully, we'll also see someone in the starting lineup get a dinger.

The Mountaineers are coming off a 2-1 weekend at a tournament at Elon where they took 2 from Akron in a DH, batting .250 as a team, with 1 HR and 13 RBI on the young season. The top of the order is the most productive, with SS Callaway in the 3-hole as their leading hitter. Their starting pitchers on Friday and Sunday carry 0fer ERAs after excellent first outings. Their bullpen numbers look decent and the fielding is pretty good, though Callaway does lead with 2 errors.

Appy St shouldn't be too tough a test for LSU, but they aren't a pushover. They're coming off a 33-27 season with a .500 record in the SoCon and return 8 of their starting fielders and all of their starting pitchers. The last time against ranked competition, they managed to take a Saturday at Miami. Still, LSU is LSU and another weekend of mass subs should be expected.

While there was some decent OOC last weekend, it's all soft, chewy cupcakes for the SEC this weekend. The lone exception is Auburn hitting the road for 3 games at #18 Arizona. 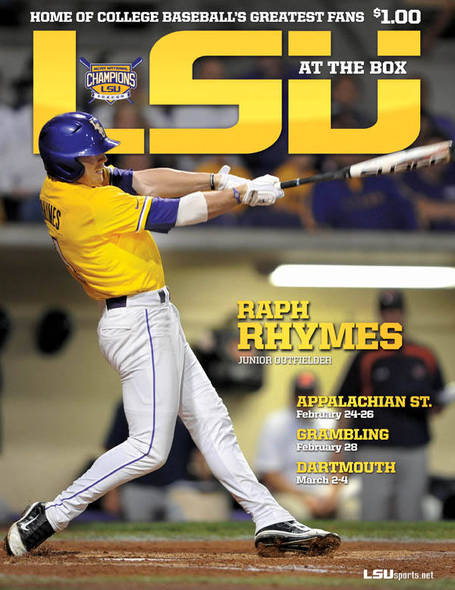 After a week where much of South LA nearly hit 80 degrees, winter is taking one final swing. Lows in the 40s with highs not getting much above 60. Overcast, with not much chance of rain, but I expect the wind off the river to be bitter so bring a jacket if you're going to The Box.