NOTE: I'm catching this series in person, so updates may be sporadic. Any volunteers to do PBP this weekend?

"Starkville is an Indian word for 'trailer park'." - Skip Bertman

Today is one of the most wonderful days on the sports calendar. I am of course talking about the start of conference baseball in the SEC. In a break with past year's tradition, LSU will be opening the season against our true rival in the sport, Mississippi State. For decades, the battles between Skip Bertman and Ron Polk were the stuff of legend, and their drives to one up each other led to the explosion of SEC baseball into what it is today.

There's no better way to research at team than to talk to someone who's actually seen them play. I talked with Robbie Randolph, one of our SB Nation blog bros over at For Whom The Cowbell Tolls,

PodKATT: State batting ranks about middle of the pack in most of the offensive categories, but is near the top of the league in sac bunts and steals. Is State playing west coast small ball or is it just the way things are with the current bat situation?

Robbie Randolph: I think its just John Cohen style baseball. Dudy Noble is a giant baseball park, and along with the new bats, we're not going to be crushing balls over the fence very often. Cohen is finally getting his "type" of baseball player into the program, and you're seeing that on the base path. He likes to be aggressive and manufacture runs. Being atop the SEC in this category will more than likely become a staple for Mississippi State, as long as Cohen is the head man.

PK: A handful of some of your best hitters have been out with injury for the past few games. What's their status and how have their fill-ins fared in their place?

RR: Injuries have been really tough for us in the last few weeks. We've lost all 3 starting outfielders from our opening day roster as well as our starting 3B. Those are ABs from players we had been really counting on. CT Bradford, Brett Brownlee, Taylor Stark, and Daryl Norris all had experience in SEC games and stadiums. I'm hoping for the best from their replacements, but the sooner these guys get back on the field, the better.

PK: Looking at MSU's schedule, you've played a pair of 4 game weekends. Has Coach Cohen used them as an opportunity to try some things in your starting pitching rotation and how ready do you think they are for SEC play?

RR: The 4 game weekend series are great for the fans, I can tell you that. Absolutely Coach Cohen uses the early games to try out new things. It's always different playing someone else, instead of an intrasquad game, so you really have to see who fits where, who can play, and how they react in a live game situation. Our pitching staff is quite deep, but with a good many young arms. I think we'll be quite strong on the mound in SEC play, it's our bats (both pre and post injuries) that are the question for MSU on the weekends.

PK: Despite an 0-2 record, Caleb Reed already has 5 saves on the year and seems to have picked up right where he left off last year. State pitching is leading the league in thrown strikeouts. Is their anyone else in the bullpen LSU should be worried about facing?

RR: I've been very impressed with freshman Jonathan Holder from Gulfport, MS. You never know how a freshman is going to respond when he's on the mound, especially in a relief situation where there is assuredly already some pressure. His BA against is .083, 8:1 strikeout to walk ratio, and 1.11 K/9 ratio are all quite strong. Luis Pollorena is a guy I always love see coming out of the pen. He's small in stature, but just thrives on the moment. His stats aren't wowing at all, but he can be dominating at the flick of a switch.

PK: Miss St. was mostly unranked in the preseason, but now are hovering in the top 20-15, even ranked ahead of LSU (and Ole Miss) in some places. Given that they were swept in a midweek series at Southeastern this week, how do you feel about where State is ranked?

RR: I feel that it's way too early to even look at our ranking. I think our strength of schedule thus far is 177, and with our recent injuries it's difficult to gauge how this team is going to respond. MSU was 2 for 24 with runners in scoring position over the 2 game series at SE Lou and left 13 men on base in the second game alone. We simply have to produce at the plate, and (again) the sooner those injuries heal, the better.

PK: It feels kinda odd playing this series to start conference play, instead of at the end of the season, right?

RR: Yes and no. Yes simply because LSU and MSU have such history and lore of being SEC powerhouse baseball teams, that the final weekend series almost always meant something. But with the expansion of the SEC, I've almost become numb to scheduling being moved around, as well as new league opponents being introduced. I can't control the scheduling, so I simply have to go with the flow; SEC baseball is so brutal, it's almost a wash who you start with.

PK: How do you see the weekend playing out?

RR: LSU takes 2 of 3. It's so difficult to win on the road, especially dealing with injuries. There's word Caleb Reed may start Friday night. If that happens and State takes the series opener, momentum could turn, and I wouldn't be the least bit surprised to see Cohen and his team take the series. But I'll be looking forward to opening league play, that's for sure.

The Road to Hoover begins now with a weekend full of divisional games, and a chance for one team to prove if it's real or not

Amazingly, Improbably, Inexplicably, Kentucky is the big surprise in the SEC and maybe even all of college baseball by managing to run through their entire pre-conference slate without a stumble and remain the only undefeated team in the country. It's not all the smoke and mirrors of a horrendously weak non-conf slate either. There is some real talent on that team that should lead to a decent showing in conference this year. The problem is that the are headed for the oncoming train of South Carolina, your two-time defending National Champions. I will gain immense respect for the Wildcats if they somehow pull this off, but South Carolina's pitching will leave none alive.

Dave Serrano's first season as the Vol's skipper hasn't been without it's growing pains, but they are still way ahead of where many thought they would be this year, with a win over Texas in Houston already under their belt. A series loss to ULM last weekend however has the Vols trending in the wrong direction. UGA has the unfortunate role of being a good team in a division with UF and SCar. They were cruising through the preseason until they hit a wall and were swept at home by UCLA. Next season, or even in the SEC tournament later this year, this will be a great matchup, but I don't think the Vols are ready for it.

Auburn is playing the small ball game to a tee, leading the conference in Sac Bunts and Stolen Bases. Unfortunately it hasn't translated to wins, with the Tigers dropping series against Mizzou and Arizona already this year. Alarmingly, they have already left 167 men on base. Ole Miss is hitting really well right now, including an 18-8 bombing at a ranked Louisville this week.

Things haven't really gotten better since Bama was swept on opening weekend at home by FAU, and against Arkansas' stellar pitching staff it won't get any better.

Hard to believe that a CWS team from last year has the worst record in conference, but the collapse at Vandy has been epic in it's scale. Aside from their low BA and high ERA, they also lead the league in errors and hit batters and have the lowest fielding percentage at .953 Facing the most powerful offensive team in the SEC (Florida has 27 HR already) it's not going to be pretty 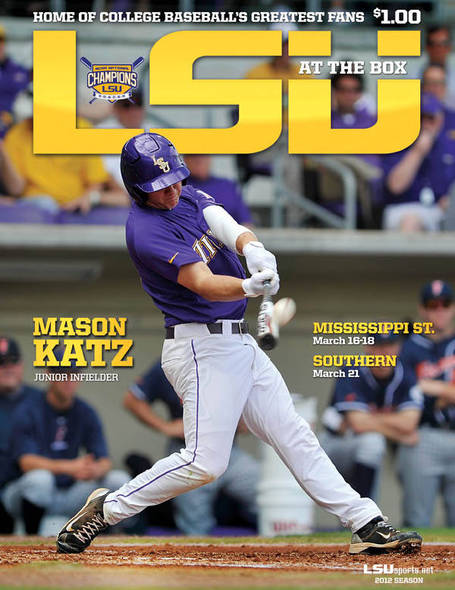 Nearly perfect. Barely hitting 80 and cloudy all weekend. No rain expected until Tuesday