Share All sharing options for: Weekend Series Recap: Tigers Drop 2 on the Plains

By the miracle of technology we actually have moving pictures to go with this weekend's away series recap, though you may not want to watch the 3rd one...

After a brief rain delay, Kevin Gausman had another good start, with 8Ks in 5IP, but worryingly had 5 walks, nearly doubling his entire season total up to that point. The long Auburn 4th had the bases loaded at one point, but Gausman was able to contain the damage to just 2 runs. LSU would even the score with a couple chip shots in the 6th, but some shaky relief from Rumbelow, McCune, and Goody allowed Auburn to retake the lead. Jones hit a huge single shot homer over that crazy wall in left to keep it close, but LSU was still down one heading into the final frame. With 2 outs, Austin Nola hit a liner to the wall in left for a double and was subbed for Fields as a pinch runner. Dozar then hit an easy grounder to 2B that was mishandled and allowed Dozar to reach safely. Unfortunately, either Fields was never given a stop sign or he ran through it at 3B and he continued chugging for home. The alert Auburn 1B made the toss to the plate and Fields was tagged out. A 2nd video replay angle (unfortunately NOT included in AU's highlight package below) confirms that Fields' foot hits the plate milliseconds before the tag was made, but as the ump had a not great angle on it and it was a close bang-bang play, there's no use in getting worked up over the call. Fields is one of our fastest baserunners and if anyone else was running, it's probably not even a close play.

One of the things that needs to be worked on is starting pitching being ready to go from the 1st pitch. Last weekend we saw Nola have a decent outing preceded by a disastrous 5 run 1st and this weekend it was Eades who needed a few more warmup tosses. A leadoff walk was sacrificed all the way home, but Eades settled in for a really good outing spacing 7 hits through 7 1/3IP and staying on until he gave up the tying run in the 8th. In the 10th Bourgeois let 2 on with walks, one intentional and gave the ball to Goody who threw a WP that moved a runner to 3rd and then a sac fly that let the winning run reach home easily.

Looking to somewhat salvage the weekend and prevent the 1st sweep by Auburn over LSU since the 80's, Fr Aaron Nola went out for his 2nd conference start and was much better than his disastrous outing v. Miss St. In fact, Nola appeared to gain more control as the game went on, giving up fewer hits to the Plainsmen on his 2nd pass through their order. LSU would send the minimum until the 4th when 4 singles, combined with Auburn's recurring fielding errors, gave LSU a 3 run lead. It would hold until Nola 3rd round with the Auburn lineup in the 6th, when he gave up a lead-off double and a home run.

Nola appeared to regain composure and had 2 outs in the 7th when a fast pop fly went out to the center field track. Sciambra took an odd lunge at it on the run, missed, then fell hard, head first, into the outfield wall, giving the Plainsmen a triple. Sciambra had to be helped off the field and was replaced by Katz in what was his first time playing CF all season. It cost us immediately as Katz misjudged a short pop up that brought the tying run home. It would stay tied until the ninth, when LSU pulled off it's best sequence of "small ball" this season: A lead-off walk by Foster, sac bunt by Hanover, and a ground ball into center from Jones to bring him home. After a short stint by Cotton, McCune was given the ball for the 9th and earned the save.

The extent of Sciambra's injury is not known at this writing, and there is some speculation that he may have not traveled back with the team (by bus) last night. As you can see in the video in the Game 3 Highlights below (starts at the 3:05 mark) the head impact and the neck bend on impact are pretty severe. Without any other information, I'm left to wonder about who will fill in the role. Jones moving back is a possibility, but I'd like to see Fields given a shot (though he is the only fielder hitting sub .200). Mainieri will have a shot to test things with USL at The Box on Wednesday before hosting West-leading Arkansas next weekend.

The next few weeks are going to be rough if LSU can't get the bats going better than they are right now. In 56 innings of league play, LSU has a total of 17 runs. Our next opponents have 37 (ARK) and 39 (UF). They've also got some of the lowest staff ERA's in the league. But this problem is not a surprise and has been haunting us since last year. The Lack of Timely Hitting (tm) was a constant problem this past weekend, especially Saturday where twice in a row LSU hit into inning ending DPs with RISP. Above all other things, this has got to improve if LSU is going to be successful.

Hanover Errors : 4, leads team (You can't end the 3B Black Hole Curse, You can only hope to contain it)

Will run tomorrow in a separate post. Suffice it to say we live in an insane world where Kentucky leads the East and South Carolina isn't even going to Hoover.

A Note must be made here about Auburn's amazing streaming service. Unlike LSU's GeauxZone, Auburn's production quality for a stream-only game is TV worthy. At least 4 camera angles, including behind the mound, an active and useful score box, updated batter statistics for each plate appearance, and the great between inning graphic you see below. They charge less than LSU does for the GeauxZone and put out a higher quality product. 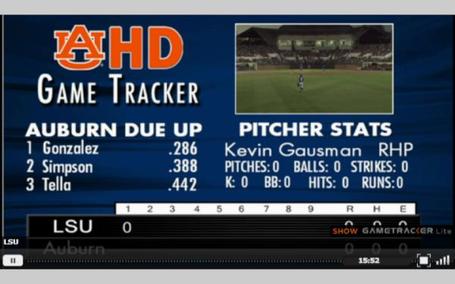