Championship week is finally here. Less than a week until Selection Sunday. Although it appears unlikely that LSU will hear their names called to go to the Big Dance, there is still plenty of time left to make up for the mistakes of the past two weeks.

The LSU Tigers take on the Arkansas Razorbacks to kick off the SEC tournament, which is being played in New Orleans(which also happens to be the site of the 2012 Final Four). The complete bracket can be found below. The first two rounds can be seen entirely on SEC Network channels before ABC takes over for the semi-finals and finals. You will notice that the format has changed and everyone is seeded 1-12 from now on.

UPDATE: ESPN recently announced that the 2 early games of Friday's quarterfinal round have been picked up by ESPNU (which would include LSU's potential matchup with Kentucky and would have no blackout restrictions on ESPN3.com) 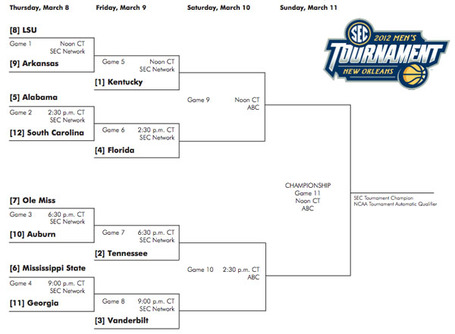 I think this could end up being one of the most exciting SEC tournaments since the 2008 Georgia "fiasco". If you remember, E6 seeded Georgia won the tornado-impacted tournament on the home floor of their rivals at Georgia Tech. With the lack of separation between a lot of teams this year, it's really possible that any team could win.

Of course, the Kentucky Wildcats enter as huge favorites. After going 16-0 during the SEC regular season and 30-1 overall, it will take a monumental upset to knock them off. But I think it will happen. I originally predicted last week that I didn't think they would win the tournament, and even that they would fail to reach the finals. With the way that it shaped up, it's entirely possible.

The Alabama Crimson Tide might be the team to do so. Their path isn't the most difficult, as they face the 12th seeded South Carolina Gamecocks first before they would play the reeling Florida Gators. UF defeated Alabama in their only meeting so far this season, but since then the Tide has won 4 of 5 and reinstated many of the players that were missing in mid-February. That's where I think Kentucky could suffer their second loss, especially considered that Alabama played Kentucky very well in their single meeting this season.

On the other side of the bracket, many will be surprised to see that Tennessee finished high enough to claim the number 2 seed. The hottest team in college basketball has worked their way all the way back from sub .500 to the NCAA tournament bubble with their February winning. Even though they have been playing very well with freshman Jarnell Stokes in the line up, I think the run towards the NCAA tournament could end early.

Ole Miss is another team that has quietly finished strong with a 3 game winning streak against LSU, Arkansas, and Alabama. Auburn is their first SEC tournament game, which is certainly winnable, and a hot Mississippi team could cause problems for Tennessee.

After that, judgement day might finally be near for the Mississippi State Bulldogs. After stopping a 5 game losing streak, the MSU Bulldogs take on the Georgia Bulldogs in the final game on Thursday. A loss in that game legitimately could cost MSU an NCAA at large bid, while a win against UGA and the awaiting Vanderbilt Commodores could push them far up into the bracket and perhaps as high as a 9 seed.

Overall, I think the tournament will be totally shaken up when all is said and done. Below is a completed prediction bracket for how I think it might end up. 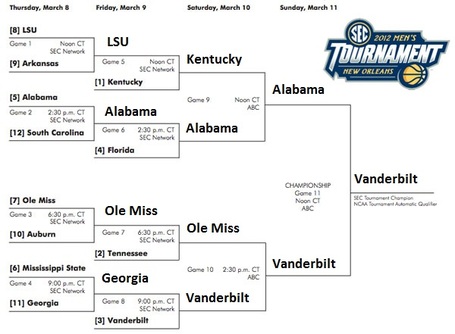 I imagine the common thought is that Kentucky will run away with the tournament, but it is never orderly when it comes to college basketball. Feel free to leave any comments about how you think it will end up.