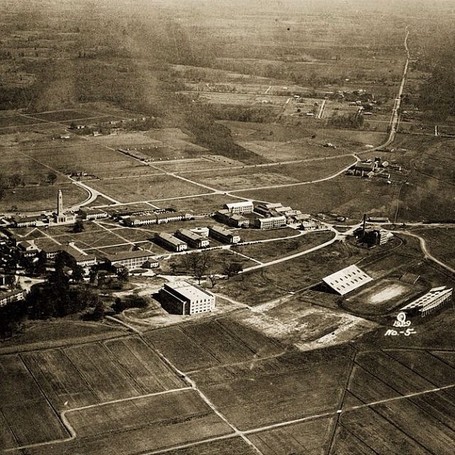 It's amazing to think how little there was on campus back then, and also how nearly all of the buildings in this photo are still standing.

Another day of Spring Ball in the books and a few interesting names to talk about. Miles acknowledged that Isom is trying out and that he has much less "reservations with her [being part of the team] than I would with any number of other people who frankly didn't know what they were getting in to." He also made it clear that she would have to bring an advantage to the team to be considered and that there was no timetable for the results of her or any other potential walk on's ongoing tryouts this spring. Both Miles and Isom herself mentioned the high winds yesterday not being conductive to good kicking tryouts.

The other interesting name to hear was Elliot Porter, who long time readers may remember as the crux of an argument about oversigning a few seasons ago. Miles liked his play and said he had been taking reps at Center. The full Miles press conference is posted after the break and be sure to scroll down on our main page to see some Big Cat Drill video we posted last night.

Fo those interested, LSU will be in the afternoon session of Day 2 of SEC Media Days this July.

Yesterday was Morris Claiborne Day in his native Shreveport.

After upsetting #1 seed Kentucky and falling just short of the SEC Championship against Tennessee, Head Coach Nikki Caldwell followed up a weekend of getting the program back on track with the birth of her daughter Justice Simone Fargas in the early hours of Tuesday. Coach and baby are doing fine and Coach is going to be back in plenty of time to prepare for the NCAA 1st round on March 18th.

The coaches' All-SEC teams for men's basketball are out and only 2 Tigers made the lists, Justin Hamiltion mad 2nd team All-SEC while Anthony Hickey made the All-Freshman team.

What did we tell you? Jefferson's combine went just fine.

Matt Flynn is now an unencumbered free agent. PAY THAT MAN HIS MONEY!

Mike Fontenot and Ryan Theriot now both have World Series rings and are now both on the same roster again with the Giants.

I can hardly believe it myself, but it would appear that conference realignment rumors are starting up again. Even before this news, there are folks wondering if the Big East is celebrating it's final hurrahs.

Here's a few words from Karl Benson, the current WAC Commish and soon to be Sun Belt Commish on his plans for the future of the Sun Belt.