It's the final weekend before conference play and one last chance to try out some adjustments before the competition ramps up significantly.

Michigan (6-6) is off to a rough start and their level of competition hasn't been great. They've got big wins over Seton Hall, West Virginia, and Chicago St, but losses to Pitt, Ohio St, and Florida Gulf Coast. The Wolverines are hitting just .268 as a team, but they have a standout in Sophomore OF Michael O'Neill (BA .480, 15 R, 24 H, 8 2B, 5 HR, 16 RBI, OBP .500, slugging .940). They are also talented on the basepaths, going 28-36 already this season. Starting pitching is decent, though their Friday guy Sr. RHP Brandon Sinnery has no decisions after 3 starts. The averages in their bullpen are all over the place and they have a staff ERA of 4.21

Notre Dame started out 5-1 against area competition in Florida tournaments then had the misfortune to schedule a 3 game stand against the hottest pitching staff in the country. The Irish were swept and shutout last weekend at Texas St. of the Southland Conference as the Bobcats were in the midst of a 50+ inning streak of shutout baseball. Hitting .285 as a team, the main Irish weapons are junior infielder Frank DeSico (BA .436/OBP .511/SLG .487), junior catcher Joe Hudson (BA .424/OBP .537/SLG .697) and sophomore first baseman Trey Mancini (BA .424/OBP .488/SLG .606). Both of the starting pitchers they plan to send have ERAs above 9.00 and their staff ERA is 5.77

Notre Dame is in town as a favor to Paul Mainieri, who is the best coach in Notre Dame history and where he made his name as a legend of northern baseball. From Notre Dame's release:

Paul Mainieri established an unparalleled standard of excellence during his tenure at Notre Dame (1995-2006), leading his teams to 11 40-win seasons, nine conference titles, nine NCAA Regional appearances and a berth in the 2002 College World Series, marking the school's first CWS trip since 1957.

Mainieri led to Notre Dame to an NCAA Regional in every season from 1999-2006, making the Irish one of 10 teams to appear in every NCAA Tournament in that eight-year span - the others were Miami, Texas, Rice, Cal State Fullerton, Florida State, Stanford, Clemson, Tulane and Oral Roberts. Notre Dame also joined six other schools (LSU, Miami, Rice, South Carolina, Stanford and Texas) as the only programs to reach an NCAA Regional final every season from 2000-05.

To be honest, Michigan and Notre Dame are probably more looking forward to playing each other in the morning games this weekend. As you might expect they are both some of the most played opponents in both programs histories, with Michigan leading the all time series 83-44. Normally this is an annual home-and-home series, much like we have with Tulane, but both teams have decided to play it on the road in Baton Rouge. The games are at noon Saturday and 10am Sunday, with alternating teams designated home and away. Admission is free to both games.

Mainieri has said that relief pitcher Nick Rumbelow is out for the weekend and that he expects Alex Edward, who was injured in warmups before the first game of the season, to get a few ABs in this series. He's also sticking with Foster in the OF for now, despite his slump, due to his glove. The bats have been on fire this past week and we can only hope it continues, assuming we get to play all of these games. The Bullpen could still use a few good outings as well.

In this last weekend before conference play everyone is at home, though not everyone is taking it easy. #13 UGA is hosting a 3 game series against #20 UCLA which I think should give us a good read of a good Dawgs squad that's being overshadowed by the beasts in the East. Bama is hosting ECU, #23 Louisville, and Oral Roberts in a tournament. Otherwise, it's the final cupcake weekend

The big matchup of the weekend is the final T25 weekend series we'll see until the post season, with #5 Texas A&M hosting #11 CS Fullerton. Elsewhere, ACC starts conference play with a big one #6 UNC @ #17 Clemson 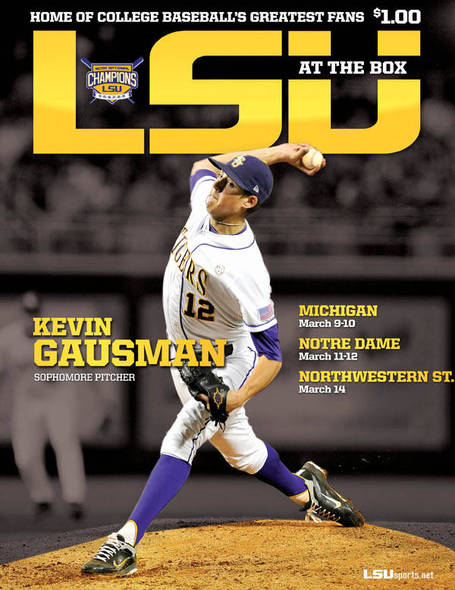 In Focus: Gausman Seeks Consistency on the Mound

Terrible. It's been raining all day across LA, though it has slacked off some this afternoon and tonight's game should be fine. Heavy rains overnight may continue through the day and push both Saturday games back a few hours. A chance of rain remains throughout the weekend and actually gets worse on Monday.

The Sunday game vs. Notre Dame is on Cox Sports, with the rest of the games getting Geaux Zone only Video