NOTE: Another weekend where yours truly will be at The Box. PBP volunteers are needed below.

It's an interesting weekend for LSU, back at home between 2 huge road series, returning as the conquering heroes over the nations #1 team. LSU is not only solidly in regional hosting contention, but is just on the outside of being named a national seed. The offense, while still not at the level most fans want, is improved over last year and is in the top half of the conference. The starting pitching is one of the best staffs in the country, the bullpen is starting to become a serious weapon, and the defense has been top notch when it's not injured. Most importantly though, is that things are starting to fall the Tiger's way. LSU is 9-2 in one run games, 8 of those wins coming in conference.

And then there's our opponent, Alabama. The Tide has an interesting recent history with LSU, not even mentioning the best error an opposing RF has committed in The New Box.

Hey Andrew! Have a good weekend in Right!

Two years ago, LSU was cruising along as the defending National Champion and ended up sweeping Bama, but not before a 14 inning epic on Sunday that was the last time Matty Ott had a truly great outing, pitching 7 innings. The game ended with a dramatic walk-off homerun by Grant Dozar. The season then took a nose dive as LSU would be swept by Ole Miss, Florida, and Ketucky and was forced to win the SEC tournament to qualify for an NCAA post season berth. Last year LSU went to Tuscaloosa just days after the tornadoes hit and in desperate need of conference wins. After an impressive win Friday night, LSU was shut out the rest of the weekend, losses that Mainieri himself acknowledges cost the Tigers a postseason.

It's a weekend that comes at just the right time: a home series against weaker competition right before LSU hits the road again for what could be another #1 team in Kentucky. With both Aaron Nola and Raph Rhymes (who STILL leads the SEC in BA) working to come off injury this weekend, the Tigers will have to stay focused to avoid the upset from an Alabama team that suddenly isn't totally dead. Honestly, the Tide's surprising home sweep of Auburn last weekend is just the kind of thing that will make sure LSU doesn't overlook them. 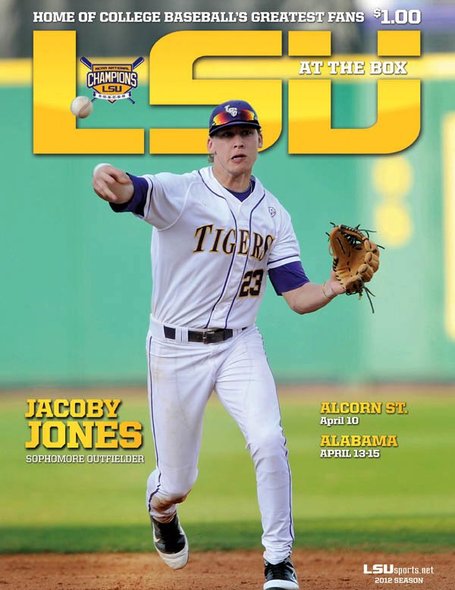 Weather is going to be just perfect, cloudy and in the low 80's with a minimal chance of rain. TV on Saturday and Sunday, the latter being nationwide on ESPN2, called by the SEC Thursday Night crew of Dave Neal and Kyle Peterson