And the Valley Cooks: Boiled Crawfish

It is that time of the year

Share All sharing options for: And the Valley Cooks: Boiled Crawfish

Ah...spring time in South Louisiana. Also known as pre-summer, because spring my ass. In South Louisiana it's nice for like two weeks and then we're back to 90s with 120-percent humidity. Though, of course this time of the year comes one of the region's best traditions, the Good Friday family crawfish boil. For my people, this typically involves as many as 30 or so people and upwards of 150 pounds of live crawfish, but for the 2012 addition, my immediate family was celebrating in Memphis, Tenn. with my oldest sister's brood. And since we've mostly centered on some of the Cajun/Creole classics, I figured this would be a good next installment.

Again, boiling crawfish is something that almost everybody has their own tips and tricks for, and my dad would gladly tell you he's learned most of his over numerous decades of attending numerous boils and the guidance of numerous influences. But I don't mind telling you that my dad boils the best crawfish I've ever had, and frankly, I'm willing to fight anybody who challenges me on this point.

Truthfully, the principle trick is a short boil for the crawfish, followed by a good long soak. But we'll get into the details below.

*In the case of the extras, I advise doing as much as you like, though in my family we never skimp on the garlic for that extra flavor. Plus, the leftover potatoes are great for other dishes. There are some other things people will throw in, and I'll address some of them below. 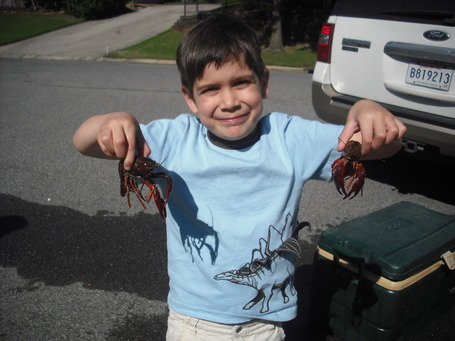 Say hello to my nephew, and future Tiger, Jacob.

1. We'll start with washing. A lot of people like to purge their crawfish in salt water, and these people are simply wrong. If you don't believe me, this LSU AgCenter scientist can back me up. In this particular case, we used an ice chest and just kept some water running through, but most people have some sort of tub that they'll use. You want to rinse them a few times until the water clears up, and stir them as much as you can to bring trash to the surface - grass, weeds and things like that. Most importantly, you want to catch any minnows or pieces of fish that were used as bait. As far as any dead or damaged crawfish go, if their eyes are still black, they're still good (unless they're just totally smashed). If the eyes are kind of glassy or grey, chuck ‘em. 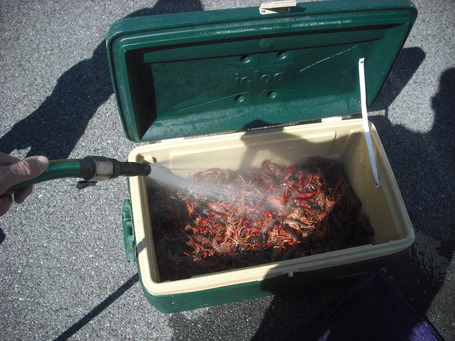 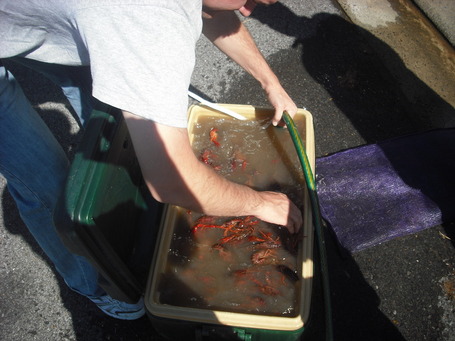 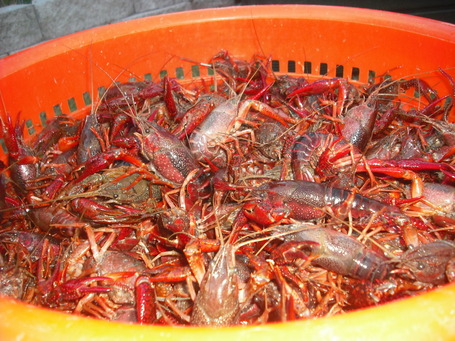 2. This is assuming you have some sort of boiling setup, but put enough water in your pot to cover the crawfish. My dad's pots have been used enough times that they more or less have their own lines on the inside to tell us when to stop. Get the pot up on your propane burner and crank it up. It should take a little while to get the water to a boil. 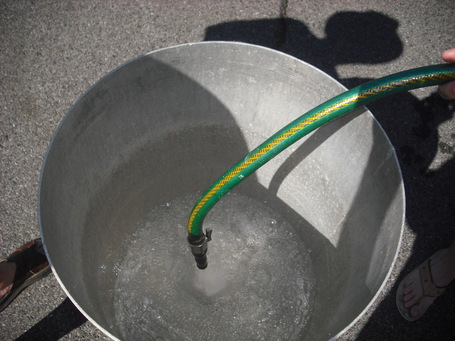 3. Halve your onions and lemons, and add them to the water, along with the red pepper, crab boil, two of the boxes of salt and the garlic pods (which you leave whole). One trick we've learned over the years is to squeeze as much juice out of your lemons into the water before you dump them in. I'm sure the boil would cook most of the juice out anyway, but this seems to make a difference for us. We also usually swish a little water around the jars of pepper or the measuring cup of crab boil in order to make sure we get as much as possible. 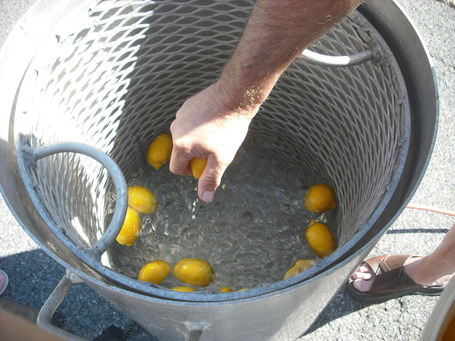 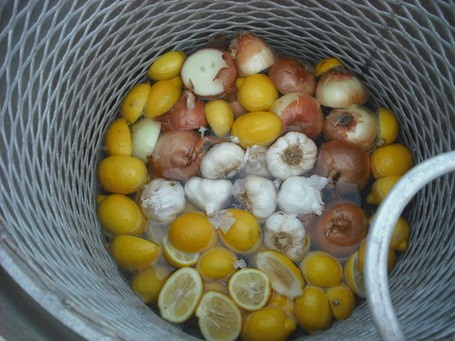 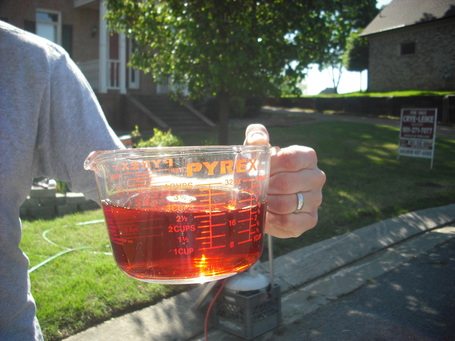 4. Bring the water to a boil, tasting it to make sure the seasonings are as you like. Once the water is to a rolling boil, let it go for about 15 minutes and let the flavors marry. When you taste, the pepper should be coming through loud and clear, and you want the water to be slightly salty, because some of the will boil off. Add the frozen corn and any additional vegetables you like to add, such as bell peppers or mushrooms. A lot of people like to throw in some sausage, but I never do -- and if you are going to, you really should wait until the crawfish or done otherwise the grease will seep out and you'll wind up with sausage-flavored crawfish. This is also when you want to add your potatoes. We usually just leave them in the plastic mesh you can buy them in at the grocery store, in order to keep them together and as whole as possible. 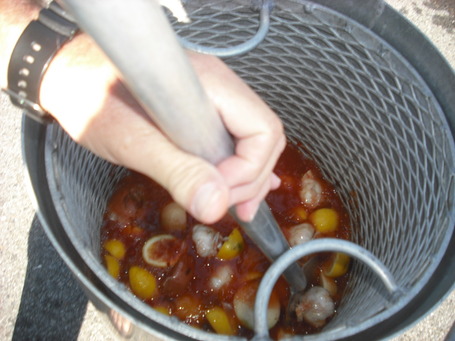 5. Once the remaining stuff is in the pot, you'll add some more salt, stirring and tasting as you go. You might use all of the remaining two boxes, or you might use slightly less, it kind of depends on your own taste. But remember, you will lose some of the salt during the boil, so you want the water to be slightly salty.

6. Bring the water back to a boil and let it go for another five minutes, adding one of my dad's odder ingredients, a couple of squirts of maple syrup. It sounds weird, but as the sugar breaks down we've found it helps make the crawfish slightly easier to peel. Just a good squirt or two. 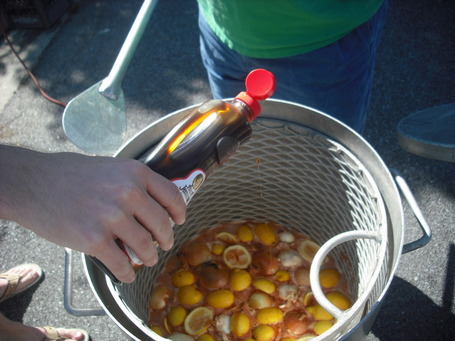 7. And now you add the crawfish. Just dump it all in and make sure all of them get pushed under the water. From there, you need to get the pot back to a boil quickly -- you might even want to turn your gas up slightly. Once they're at a boil (not necessarily good and rolling, just a noticeable boil), cover and time exactly two minutes and then cut off your gas. One of the biggest mistakes people make, not just with crawfish but shellfish in general, is cooking them too long. Remember, that water's still gonna be good and hot for some time. No need to let the boil go longer than two minutes. 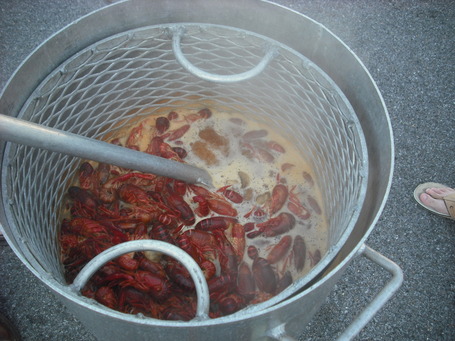 8. From there, time for the soak. You want to be stirring the pot, making sure that the crawfish stay under water but that they're still getting moved around a bit. Let them soak for at least 30 minutes. 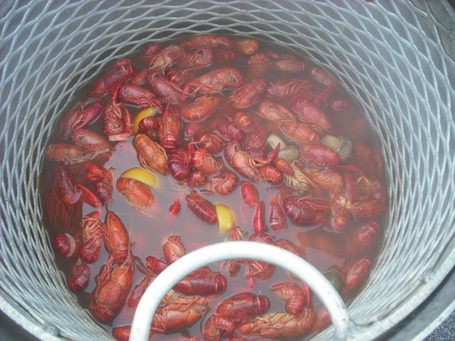 9. Here is where things get tricky, and this is where experience comes in handy. After those 30 minutes, spoon out 2-3 crawfish and open them to taste the tailmeat. Be sure not to suck the head first, so you're only getting the flavor of the meat. Chances are they won't be perfect on the first go-round, and will need a little more soaking to get the perfect flavor. From there, taste again every five minutes or so, but watch the texture and consistency of the tail meat. If they start getting chewy or mush, you risk overcooking. 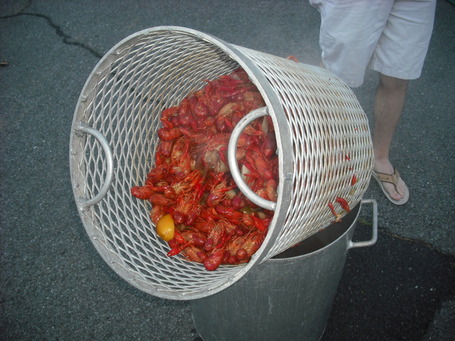 10. Sometimes this takes another five minutes, sometimes it's another 15, but once the crawfish are to your taste (or if you feel like they've been in long enough and don't want to risk over cooking), time to get them out of the pot. One sack should feed somewhere around six adults or so, depending on how many kids are around.

Let them get cool enough to handle and serve as you like! I shouldn't have to tell you how to peel the things!