Share All sharing options for: Another Very Special ATVS Interview with MO ISOM

So anyway, one-half of the ATVS Official Crush duo (still remarkably cool about sharing that title with Lolo Jones), was good enough to, once again, answer a couple of questions for us. 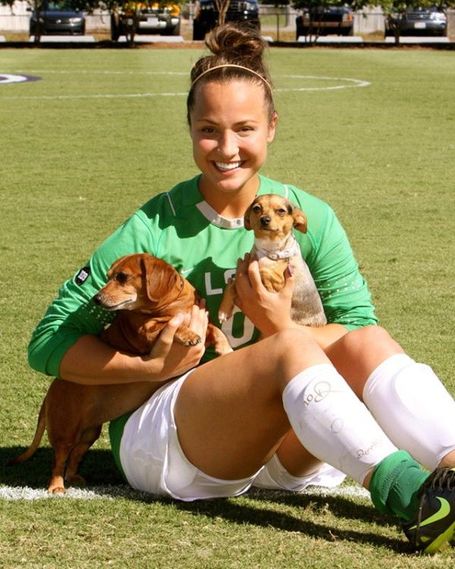 Q: Well, it's been quite the busy spring for you, hasn't it?

Mo Meaux: No. Why do you ask? There certainly hasn't been anything out-of-the ordinary that has occupied my time, energy, or focus. Haha. "Busy" is putting it about as lightly as possible. This semester has been a whirlwind! Between my studies, my leadership roles in campus organizations, my work in the community and public speaking, and four-plus hours of training for football 6 days a week, my schedule stays pretty jam-packed. My social life faded as fast as Lebron's hairline, and the only down time I have is spent at the dog park keeping frisky mutts from humping my dogs. I know, I know...it's a sweet life.

Q: So what was the whole Spring Practice experience like?

Meaux: It's really been special. It's physically, mentally, and emotionally been quite the ride. Any athlete will tell you, when you have a focus, you truly invest every bit of yourself to achieving that goal. You push yourself past every threshold to pull off the impossible. This spring has been no exception in my life. Physically, it's been taxing. I workout with the team in their organized program 5 days a week, do a rigorous core and cardio program on my own 6 days a week, kick 3 days a week, and discipline my body on the strictest nutritional plan. Every decision I make is with training in mind and how that choice will positively or negatively effect my performance in the weight room and kicking on the field. Mentally, it has been a very focused semester. Finding the balance between so many different facets of life while still maintaining some sense of normalcy and sanity has been no easy feat. :-)

And emotionally it has been overwhelming. Gaining the team's respect, getting to know the dynamic of how a male team clicks, building friendships, maintaining my identity while staying calculated in the decisions I make as a woman and as a teammate, learning and absorbing information, I mean the list goes on and on... Ultimately, it has been amazing and a real learning experience. I wouldn't trade this experience for anything. It has brought out the best in me as an athlete, a teammate, a friend, and a woman. I look forward to each and every day.

Q: Going on national television with Ellen or kicking a field goal in practice, what has more pressure?

Meaux: Ellen. Without question. Kicking field goals?-- that's just plain fun. But sitting across from Ellen Degeneres in front of a live studio audience with 6 cameras on you and all of North America watching to see how you represent yourself, LSU football, and all of Tiger Nation? It was overwhelming. The minute I sat down in that chair my nose started running. It's like my body suddenly couldn't handle all the excitement and it just let loose. Ha. My heart was pounding and I'm about 96-percent sure that the minute she asked the first question, I blacked out. I literally walked off stage and had no clue what I had said. But then we stepped outside to hit those field goals for the show and suddenly I felt right at home. Knocked a 35 and 40 yarder between the pipes and called it a day. It was such an honor to represent the University, the team, the alumni, and the fans. And it was such a fun experience! I'm so proud to be a Tiger.

Q: Do you plan on trying again in August?

Meaux: Absolutely. I'm not giving up on my dream until my eligibility is up and security literally carries me out of the football facility. Ha. When I set my heart, mind, and focus on something, there isn't a single thing that can stop me or slow me down. This is an endeavor that I will work my absolute hardest towards and see through to the end--whether that "end" is this August after tryouts, or in January of 2013 after we've won a National Championship. No matter the outcome, I want to know that I gave everything I had. I've been training, relentlessly, for this for 16 months. What's another 4 months of commitment? I have a healthy body, a powerful leg, and a determined heart. It's worth it to me to make the most of those strengths and try.

Q: We all know about your career aspirations in broadcasting as a student in the Manship School of Mass Communication - how has all the attention you've received this spring affected those dreams?

Meaux: I'm really glad you asked that, because I think my answer might surprise a lot of people. First off, I NEVER expected that simply trying out for the team would warrant the media hysteria that it did. I figured if I made it there might be a bit of a stir, but to me and to the people in and around the football program, trying out was no big deal--after all, I had been in the mix with the guys for over a year. Nevertheless, it ignited a media firestorm and it was simply up to us to brave it.

Surprisingly enough, out of ALL that was going on and ALL the outlets that were talking about it, very few actually asked me anything or spoke to me directly. I was very selective about who I spoke to and turned down the majority of the media requests that came in. So many people jumped onto the "this is a publicity stunt" bandwagon and failed to realize that handling media is a part of the territory. If people could have seen the number of things we turned down...If people could have seen how selective we were...I think they would have had very different opinions on my motives. The fact of the matter is that I stayed in close contact with the sports information department, only did the media pieces they advised, and spent the rest of my time doing exactly what I had always done--focusing on school and training, training, training. It was hard for me to hear people criticize it as a publicity stunt when I was putting four and five hours of hard work in every single day in order to make my dream a reality.

On the other hand, I can't blame them for jumping to that conclusion when it's widely-known that I am a broadcast journalism major. Seems like a no-brainer. But again, I may just surprise people...While that was my major and while the media exposure did open a number of doors, sports journalism isn't my biggest passion. I'm incredibly passionate about loving on others and serving people. I am a writer, a speaker and a motivator. I don't want fame, I want to inspire hope and give back. I have dreams of publishing a book, traveling the country speaking and sharing my heart with others, and making a difference with whatever resources I have. I'm not exactly positive how that will look long-term, but I do know that this semester certainly helped build a platform to impact others and inspire hurting hearts. And that's certainly something I'm thankful for. If anything, the attention I have received this spring has helped realign my priorities and reinforce my desires to do more than just talk sports on a sideline. I want to shine light in this world, put smiles on people's faces, and strength in people's hearts.

Q: Finally, you've become one of the better ambassadors LSU has in the blogosphere in the last year. I don't know if you've seen LSUFreek's fantastic animated gif of you:

but it's become one of the more popular ones out there amongst the college football fan set. Any words for your adoring public?

Meaux: Can I start by saying that gif is absolutely awesome? I want to shake the hand of whoever created that because it makes me laugh every time I see it. My friends will tell you, I'm a horrible winker. I've never been able to master "the wink". So the fact that the ONE time I was able to pull together a pretty successful wink was not only caught on camera, but also immortalized in a gif...well, it's pretty darn special. Haha, love it.

As for friends and fans out there, I absolutely love y'all. Your support means more to me than I can even express. Honestly. I love Tiger Nation and am so proud to represent this school. I hope I've done you all proud, so far. And I hope to continue to make you all proud. Athletes will come and go, but the fans are what make LSU. You all are the heart and soul of the school and I'm humbled to be a small part of that magnificent history. Thank you guys for all that you do and all of your positive energy and support. As I always say, the only thing more dangerous than allowing others to put limitations on what you can achieve, is allowing yourself to believe them. Impossible is nothing! God Bless!