Share All sharing options for: GAMETHЯEAD: LSU vs. COMMUNISM, 6:30pm 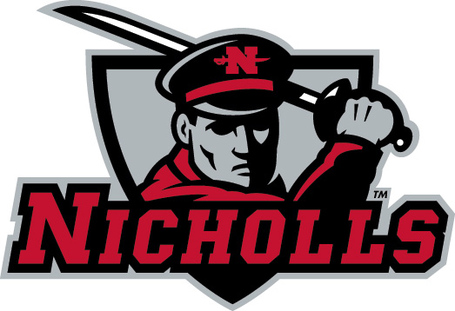 A team that bats with swords, clearly UNAMERICAN!

We come to the end of another baseball season, the wagons pointed straight home for the postseason, with ground still yet to cover in the final weekend series and the conference tournament in Hoover. But there is one more home match left and it is against our old adversary, the Nicholls St. Kolonels. It's been a banner year for the Commies* (25-25, 12-17 in the Southland), that started off with an opening day win at Southern Miss and non-conference series wins v. ULM and Southeastern on back-to-back weekends. With only 2 conference series wins this season, however, their season may end this weekend as they'll need to sweep S.F. Austin to even reach their post season tournament. Offensively, their numbers aren't that far below LSU's, batting .278 as a team, and they have the reigning LSWA Offensive player of the week in Jeremy Hill (383/509/453 64H 72B 4HR 39RBI). The Commies also love to steal, taking 98 bases out of 113 attempts, something that could be a problem with our current catching situation. Nicholls is starting it's 2nd best starter in Wisecarver tonight, but it looks like he mainly does midweek games. While I'm sure both squads want to win this game, it'll be interesting to see the pitching strategies as both teams have big weekends ahead.

Speaking of pitching strategies, Kurt McCune is getting his first start in more than a month as Eades' continued dip in effectiveness has raised up the alarm that we need another arm for the post season. A good outing tonight could see him get a start in Hoover if needed. Ideally, you want to just win and get home quickly tonight, but consider this: Nicholls has one win against LSU in the last 12 meetings, that win was in 2009, right before LSU started on the path to a National Championship.

Video via the GeauxZone service only, weak chance of a thunderstorm tonight, so we should be fine.

*The whole Nicholls = Communism gag has been running as long as I've been in charge around here, but I have been assured that actual Americans do in fact attend and have graduated from the institution. I've yet to actually meet one, but people I trust say they do exist.