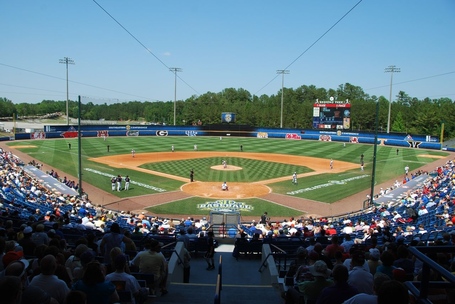 LSU comes off the Bye with a big opening test against Mississippi St. They will be throwing their ace Chris Stratton, who's got the best ERA in the conference at 2.16 and is second only to Gausman with 115 strikeouts. Against him, LSU will be starting Aaron Nola in a brief outing, followed by the full bullpen cast. Gausman might have started if the Thursday S Car game hadn't been rained out and moved, but there was no chance Mainieri was going to let him pitch on short rest after a complete game. Last time, Nola allowed 5 runs in the 1st to Miss St., but he's no longer a wide eyed freshman and should do fine. I would be worried about MSU's big 1B Wes Rea who was able to blast a 3 run HR out of the barn that is Hoover Municipal off of ARK's starter yesterday.

The game will start 30 minutes after the Elimination Game between Ole Miss and Arkansas (estimated 12:30 start) and will air on Fox Sports, which means local blackout rules will apply to the ESPN3 service. Free audio of the SEC Network's broadcast is available here.

OTHER LINKS OF INTEREST

Rhymes VOLUNTARILY gave up his scholarship after last season to help improve the team. Amazing.

On Skip's 74th birthday, the league office looks back at his amazing accomplishments in bringing SEC baseball out of the Stone Age.

Learning from the LSU example - SEBaseball.com

Just increasing the tourney field to 10 teams isn't going to be enough to get more teams into the NCAA. They have to actually be good.

SEC baseball has never been better. So why are two formerly top line programs in the dark ages? (Hint: because they are cheap)

HOW THE BIG EAST DIED AND WAS DEAD ALL ALONG - EDSBS.com

A perfect explanation of why college football has never, and will never work in the Northeast, and why Big East football was dead before it began.

Apologies for the brevity this morning, but I have a good reason

As you read this, I'm somewhere in Mississippi (hopefully) rushing to get to Hoover in time for the game. I'm not sure if I'll be able to do my usual Gamethread updates, but I should be. Volunteers will be welcome if I can't. I'll be tweeting as much as I can from the @valleyshook account, so follow along there as well and drop me a line if you're in Hoover and have a line on some good BBQ.