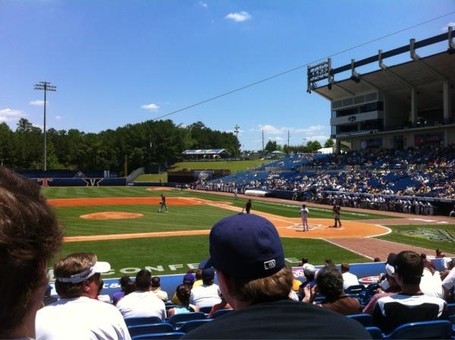 It's win or go home from here on out for LSU, but you could hardly ask for a better pitching situation in an elimination game. LSU is sending uber-starter Kevin Gausman while Ole Miss is starting....a player to be named later. The Rebs have already thrown their best starters in Wahl and Mayers earlier this week, and according to OM HC Bianco's comments their other semi-regular starter RJ Hively may be too sore to start. I'll share in the comments who it is as soon as I find out. This bodes well for LSU, as the last time Ole Miss started TBA v LSU it was a 12-3 massacre. It's going to be a long grind to Sunday now that LSU has lost, so pitcher conservation is key. Gausman has to last long, maybe even go complete again.

The game is again on Fox Sports, so ESPN3 blackouts do apply. The SEC's neutral radio broadcast is still available for free on their site.

Now that I'm settled in in Hoover, I'm going to try and do the Gamethread updates, but coverage in the stadium is spotty, so I'm still looking for volunteers. Big thanks to WatsonTiger for his work yesterday.

An amazing collection of pictures from the early days of Rosenblatt

The 75 Most Average SEC Players in (Recent) History - EDSBS.com

Billy put together an amazing list of not so amazing players from the SEC's past, it almost assuredly will make you go "Oh Yeah, I remember that guy"

Pour one out for your homies at the TimesPic