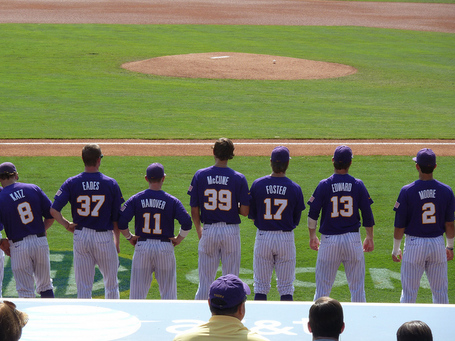 Yesterday's 11-2 clobbering of Ole Miss was exactly the kind of turn around you hope to see from a team facing elimination. We knew going in that Ole Miss' pitching was going to be a weakness to exploit and the Tigers were able to find the exact point at which the Rebels bullpen ends and exploit it terrifically for a 5 run 8th. Ignoring the gawdy numbers from the most lopsided game in the SEC Tournament so far, there are a few key things from the game to pay attention to going forward this week. Ty Ross playing catcher so soon after his appendectomy had we worried, but he was fine behind the plate (miracle of modern medicine). He was not tested with a pickoff throw, though, so we'll have to wait to see if that rifle arm is back or not. Snickeris's late insertion at DH was fantastic and he is clearly ready to go. I don't care how bad the Rebels relief was, he wasn't throwing LSU BP and hitting a home run at Hoover is a huge feat. This team is starting to look offensively like it did before the Vandy series and that is a great sign for the remainder of the post season. There is a knee jerk panic reaction you have to Gausman getting pulled for the bullpen after 8, but remember that the SECT is a marathon, not a sprint. If you want Gausman back for Sunday, it's best to pull him as soon as the game got out of hand. McCune and Cotton did fine and really didn't pitch much at all. I think things are setup well for this weekend.

TO get to the weekend, we have to get past State again. The best news is that they won't be starting Stratton. The Bulldogs will instead be going with FR Jacob Lindgren (2.75 ERA, 19.2 IP in 12 app, 18H, 18K, 4BB) followed by an ensemble cast. I'm not sure how many arms are left for State, including their closing arms in Reed and Holder who have both been used twice already in the tournament. LSU will go with Eades, followed by the bullpen cast as well, but they are much more rested. I think the key is going to be getting to State's bullpen before they get to our's. If Eades can have a good outing (he went 7IP with 8H but only 1 run v State back in March) that sets LSU up great for a win today, and a much better pitching situation tomorrow against Kentucky (if we make it)

The SEC tourney is on the CSS stations today and tomorrow, which means Cox Sports in Louisiana and NO BLACKOUTS (HUZZAH!) on ESPN3. The SEC is still providing a free audio feed of the game HERE.

One link to share today, an excellent preview of the LSU-Mizzou Super Regional this weekend from our SB Nation Blog Bros at Rock M Nation.